India is playing with fire that will burn its secularity, says Pak president - GulfToday

India is playing with fire that will burn its secularity, says Pak president 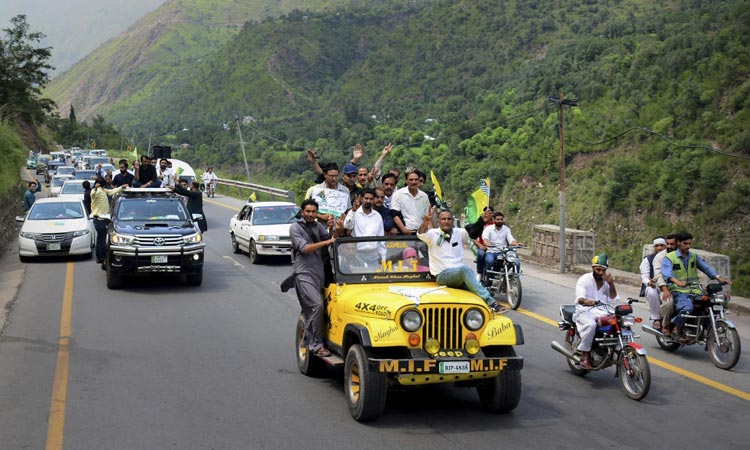 Journalists make victory signs while take part in a rally marching towards the Line of Control, in Chinari, a small of Pakistani control's Kashmir, on Saturday, AP

Pakistan President Arif Alvi has said that India is playing with fire by revoking Jammu and Kashmir's special status and the same fire will burn its secularism. He said this in Islamabad to “Vice News,” an American-Canadian media outlet on Saturday.

According to a report published in 'Dawn,’ a Pakistan newspaper, Alvi said that the Indian government is living in a 'fool's paradise' if it thinks that it can improve the situation in Kashmir by revoking Article 370.

Alvi said India, in fact, encouraged terrorism through the Constitutional changes for which Pakistan is not responsible.

When asked if Pakistan is disappointed that no statement was issued after the United Nations Security Council meeting on Kashmir, Alvi said that the issue was deliberated upon and has been 'internationalised' after a long time'.

He said India ignored several Security Council resolutions on Kashmir and refuses to negotiate with Pakistan to settle the dispute.

"I think there is hegemonistic intent to capture Kashmir, but that won't happen," he said.

Echoing Prime Minister Imran Khan's views, he said Pakistan will continue to raise the Kashmir issue at all international forums.

Alvi expressed apprehension that India can stage a 'Pulwama-like operation' and then attack Pakistan but "we don't want to start a war."

"If India starts a war it is our right to defend ourselves," Alvi said.

Pakistani police have stopped hundreds of journalists from symbolically trying to cross the highly militarised border into Indian-controlled Kashmir.

The journalists' leader, Zafeer Baba, said Saturday's protest was an attempt to report on the situation in Kashmir. India has imposed a sweeping media clampdown there since Aug.5, when it downgraded the autonomy of the portion of Kashmir under its control.

The region has since been under a harsh military curfew, with thousands detained and all communication and the internet cut. Authorities started easing restrictions last Saturday.

Pakistani police officer Arshad Naqvi said the journalists' vehicles were stopped around seven kilometers (four miles) from the Line of Control, which divides the Himalayan region.