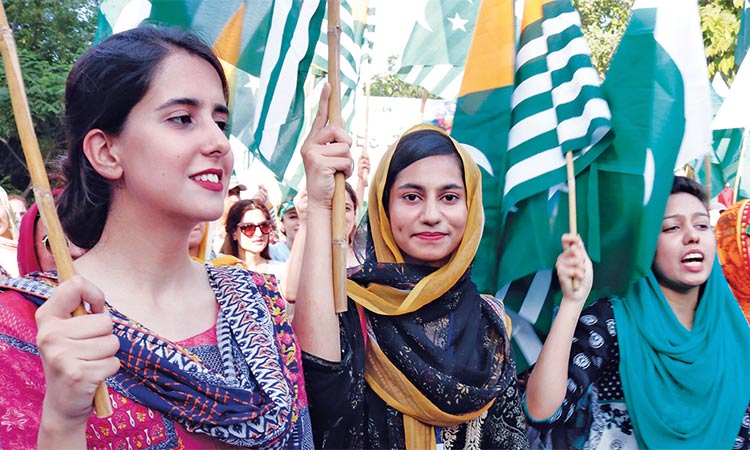 With the world virtually shutting its doors to Islamabad’s attempts to get them to censure India,  Prime Minister Imran Khan on Friday took to Twitter again to attack New Delhi, this time warning that India is likely to attempt a “false flag” or covert operation to divert attention from Kashmir.

“I want to warn the international community that the Indian leadership will in all probability attempt a false flag operation to divert attention from its massive human rights violations & the unleashing of a reign of terror in IOJK,” Imran Khan tweeted.

According to a media report, Imran will address the UN General Assembly in New York on Sept.27 and highlight Indian atrocities in occupied Kashmir.

A small delegation will accompany the premier, who will travel to New York by a private flight.

Officials said the move is part of Pakistan’s diplomatic offensive against New Delhi’s unilateral decision of revoking the semi-autonomous status of the Muslim-majority territory on Aug.5, stepping up movement restrictions and cutting off phone and internet access to head off civil unrest across the region.

Islamabad in its immediate response downgraded its diplomatic ties and suspended bilateral trade and reached out to the international community asking to intervene.

In another tweet, Imran trashed Indian media reports that terrorists from Afghanistan have entered Jammu and Kashmir.

“We are hearing Indian media claims that some terrorists from Afghanistan have entered IOJK (Jammu and Kashmir) for terrorist activities, while others have entered India’s southern regions. These claims are predictable to divert attention from India’s ethnic cleansing and genocide agenda in IOJK,” tweeted Imran.

His tweets come as Foreign Minister Shah Mehmood Qureshi on Friday alleged that India is “heading towards genocide” in Kashmir and that the international community needs to open its eyes towards the “propaganda by the Indian media.”

“The world needs to take notice of Indian propaganda,” Qureshi said, adding it was the responsibility of G7 and its members to open its eyes towards the propaganda. This is an issue of the region. G7 needs to be informed about it.

“The Indian media is falsely propagating that around 100 terrorists will enter. India can do a false flag operation in occupied Kashmir,” he added, repeating what his PM alleged.

Earlier, in an interview to The New York Times, Imran said that Pakistan will no longer seek dialogue with India as it has repeatedly rebuffed peace overtures.

India has stressed that Pakistan needs to take “credible” action against terror groups as a first condition to resume dialogue.

Khan told NYT that he fears the threat of a military escalation between the two neighbours due escalating tensions over the Kashmir issue.

“There is no point in talking to them (India). I mean, I have done all the talking. Unfortunately, now when I look back, all the overtures that I was making for peace and dialogue, I think they took it for appeasement,” he said.

According to a media report, Imran is set to address a public meeting in a Hindu-dominated area in Sindh province on the Kashmir issue. Imran will visit the Umarkot region on Aug.31, the Roznama Pakistan said in a report.

According to the report, the exercise was aimed at expressing his solidarity with the Hindus and other minority communities living in Pakistan. The meeting will be held near the Mahadev temple in Umarkot. Lalchand Malhi, an MP of the ruling Pakistan Tehrik-e-Insaf party, has issued a video message for the people, in which he said: “Prime Minister Imran Khan is coming to Umarkot to express his solidarity towards Hindus and other minority communities, and he will address a public meeting over there.”

Last week, Pakistan also took up the matter at the UN Security Council, which was hailed by officials as the great diplomatic achievement and internationalisation of the Kashmir dispute.

Officials said that the premier will embark on a four-day visit to US on Sept.23. He will hold meetings with his Malaysian counterpart as well as other world leaders on the sidelines of the session, besides meeting representatives from the Pakistani Diaspora and business community in the states.