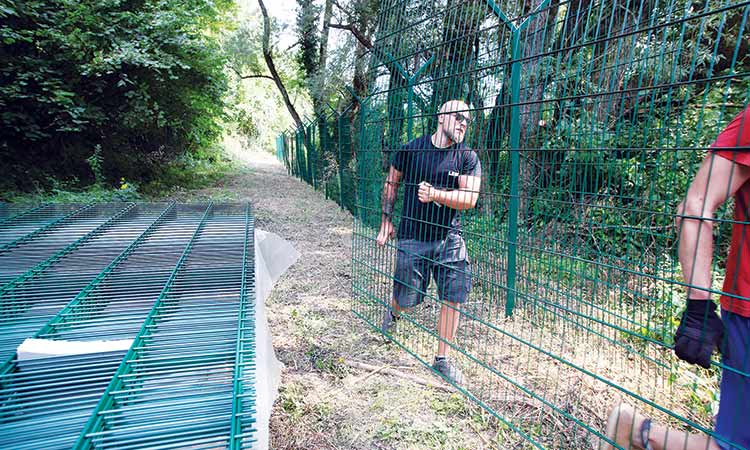 Workers install a fence on the bank of the Kolpa river in Preloka, Slovenia. Reuters

Slovenia has begun work on an additional stretch of fence along its southern border with Croatia with which it aims to keep out a rising number of migrants entering the country illegally.

Slovenia’s police registered 7,415 illegal migrants in the first seven months of this year, a jump of 56% compared to the same period of 2018 as more people are try to reach wealthy Western states via the Balkans.

“The fence will be erected temporarily in the areas where it is necessary to prevent illegal crossings of the state border and ensure the safety of people and their property,” said Irena Likar, a spokeswoman of the Interior Ministry.

A Reuters photographer near the village of Preloka in southern Slovenia saw construction work underway at the site.

Likar said the exact time plan and location of for the erection of the fence would not be made public.

Slovenia first began constructing a border fence during the refugee crisis of 2015 when in a period of six months about half a million illegal migrants passed through the country.

This new stretch of fence is around 2.5 metres high and is being erected on the banks of the river Kolpa which runs between Slovenia and Croatia.

The government’s immigration policy has met with little opposition in Slovenia, although some civil society groups are against the wire fence.

Most illegal migrants come from Pakistan, Algeria, Afghanistan, Morocco and Bangladesh. Only a fraction seek asylum in Slovenia, with most continuing on to neighbouring Italy and Austria.

The mayor of Italy’s Lampedusa island on Thursday denounced the collapsing government for its failure to deal with migrant rescue boats, as a ship carrying 356 people remained stranded in the Mediterranean.

Mayor Salvatore Martello said the reception centre on the tiny isle was already over capacity and would struggle to house migrants currently stuck aboard the Norwegian-flagged Ocean Viking.

The vessel, run by charities Doctors Without Borders and SOS Mediterranee, has sought a port for almost two weeks after rescuing four boats of migrants off the Libyan coast between 9 and 12 August.

“It would be difficult because the reception centre is saturated,” Martello told AFP.

“The island no longer exists politically. It is just exploited in political clashes in Rome.” Lampedusa has long been a magnet for African migrants fleeing poverty and conflict.

Thousands have attempted to make the unsafe crossing from Libya in a bid to reach Europe this year, despite efforts to deter them.

Italy’s far-right Interior Minister Matteo Salvini has been accused of demonising migrants and leaving them to drown in the sea.

He has repeatedly insisted that rescued migrants can only land in Italy if other EU countries take them in.

Italy’s president on Thursday was holding a second day of talks after the disintegration of the anti-immigrant coalition government, which broke down after the resignation of Prime Minister Giuseppe Conte on Tuesday.

The plight of the migrants aboard the Ocean Viking, which was denied entry by both Italy and Malta, is the latest in a string of migrant boat standoffs with Italian authorities.

The Open Arms rescue ship was allowed to land in Lampedusa on Wednesday, with 83 migrants disembarking, after Italian justice ordered they be brought ashore.

Many of them had spent 19 days on board the ship after being picked up while in difficulty in waters off Libya.

There were initially 147 mainly African migrants on the ship but all minors and some suffering health problems had already disembarked.

A European deal to redistribute them has yet to be implemented.

Police in North Macedonia say they have detained 45 migrants in a van close to the border with Serbia and arrested the driver on suspicion of people-smuggling.