Boost for DMK as opposition parties join protest in Delhi 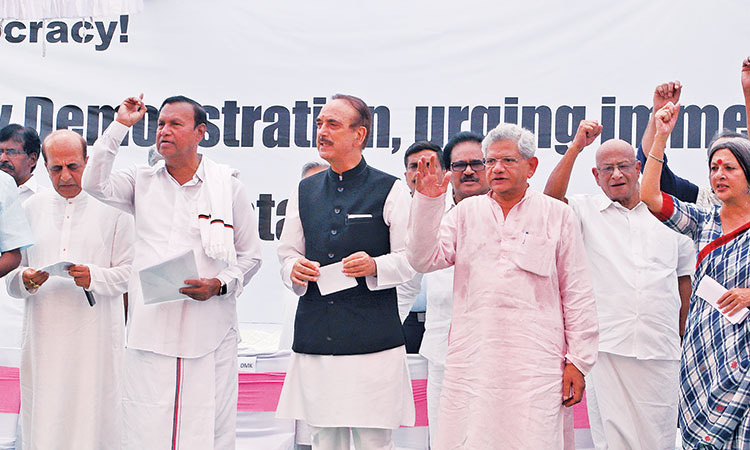 Leaders from various political parties protest in New Delhi on Thursday against the revocation of article 370 from Jammu and Kashmir. Associated Press

Tamil Nadu’s principal opposition Dravida Munnetra Kazhagam (DMK) on Thursday expressed satisfaction that several mainstream opposition parties including the Congress and the Communists joined a demonstration staged by the party in Delhi to protest against the Central government’s revocation of special status to Jammu and Kashmir provided under Article 370.

The protest at Jantar Mantar, a kilometre away from Parliament House, demanded immediate release of leaders detained as the Centre moved to impose its decision on August 5. Prominent Kashmiri leaders like Omar Abdullah and Mehbooba Mufti are under detention since August 4 night, a day before the government announced its move while normalcy has not returned to the troubled state, as communication links are still down.

DMK sources said that on Thursday, former Jammu and Kashmir chief minister and Leader of the Opposition in the Rajya Sabha, Ghulam Nabi Azad of the Congress party, Communist Party of India-Marxist party general secretary Sitaram Yechury and his colleague Brinda Karat, Communist Party of India leader D. Raja MP, and several other opposition leaders joined the protest in Delhi. Karti Chidambaram, Lok Sabha member from Tamil Nadu and son of former Union minister P. Chidambaram who was arrested on Wednesday night, was at the protest along with senior Congress leader Mukul Wasnik.

The impressive line-up was a booster for the DMK, which is the third largest party in Lok Sabha with 38 members including allies.

The leaders raised slogans demanding the restoration of normalcy in Jammu and Kashmir, resumption of telecom services in the Valley and the immediate release of all political leaders who have been detained.

The day-long protest was led by T R Baalu, the DMK floor leader in the Lok Sabha.

DMK president M K Stalin had said that parties that “believe in democracy” would participate in the protest to send a signal to the BJP that implementation of its Kashmir policies was not according to democratic principles. “The Central government has isolated Kashmir from India by imposing curfew, using repressive forces and implementing prohibitory orders.

By cutting channels of communication, the government has unnecessarily created a hostile environment,” his statement read.

“By cutting channels of communication, the government has unnecessarily created a hostile environment,” Stalin said.

At the same time, the absence of Viduthalai Chiruthaigal Katchi president Thol Thirumavalavan at the protest raised eyebrows. A close ally of the DMK, Thirumavalavan, an MP, issued a statement explaining his absence.

“Due to unavoidable reasons, I am not able to attend the protest organised by the DMK,” Thirumavalavan said and added that an agitation by the VCK would however happen in Chennai.

On August 10, five days after the presidential order to amend Article 370 and reorganise Jammu and Kashmir was cleared in the Rajya Sabha, the DMK held a multi-party meeting in Chennai.

The meeting passed a resolution demanding that the opinion of people elicited through an elected government should be first taken before implementing the changes.

Senior Congress leader Ghulam Nabi Azad on Thursday claimed that India was no more a democracy. Azad’s remarks came while he was addressing an all party meet, called by the Dravida Munnetra Kazhagam (DMK) at Jantar Mantar protesting against the house arrest of senior political leaders of Kashmir.

“Let me tell you, we are no more a democracy. If anyone thinks that he is living in democracy that person is living in fool’s paradise,” Azad said.

Azad added that, “When I was the Minister of Information and Broadcasting I had no guts to call editor of state owned media platforms to drop a story. But now any random leader of the ruling party calls any media outlet, its editors or owners to drop the story and the outlet has to oblige. This is not a democracy.” Azad urged the Central government to restore all the Telecom services in Jammu and Kashmir and to release all the political prisoners and leaders including Omar Abdullah, Farooq Abdullah and Mehbooba Mufti. 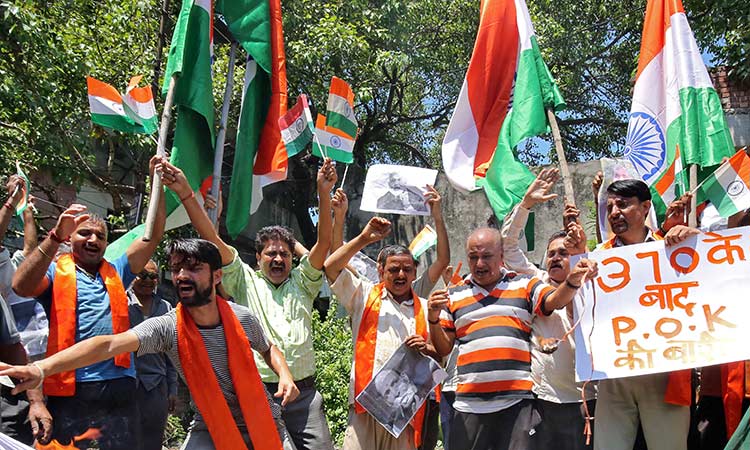 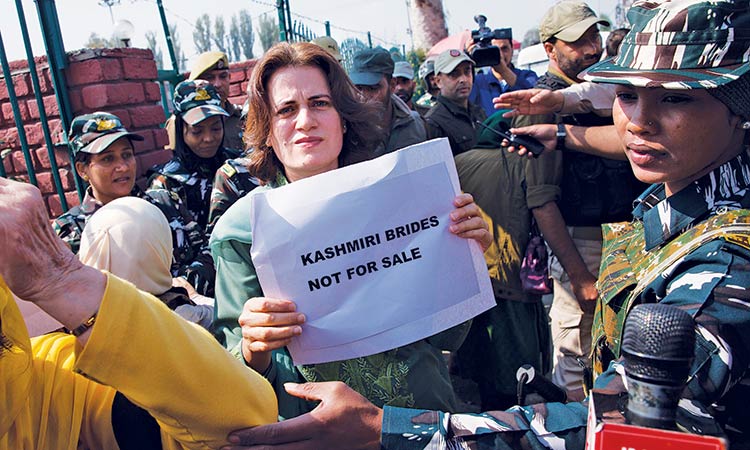 A group of Kashmiri women led by former Jammu and Kashmir Chief Minister Farooq Abdullah’s sister Suraiya and daughter Safiya staged a protest here on Tuesday against the scrapping of Article 370.