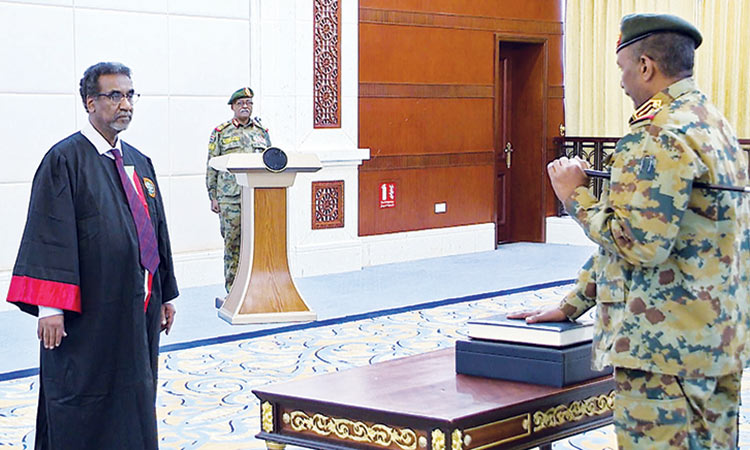 Sudan’s top general was sworn in Wednesday as the leader of a joint military-civilian body created to rule Sudan during a three-year transition period toward democratic elections.

Gen. Abdel Fattah Burhan was sworn in before the country’s top judge and will lead the 11-member Sovereign Council for 21 months, followed by a civilian leader appointed by the pro-democracy movement for the next 18.

The long-waited move came after more than four months of tortuous negotiations between the ruling military council and the pro-democracy movement following the army’s removal of longtime autocratic president Omar Al Bashir in April.

The new Sovereign Council was established under a power-sharing agreement between the military and the protesters, following pressure from the United States and its Arab allies, amid growing concerns the political crisis could ignite a civil war.

The 59-year-old Burhan chaired the military council that took over the country after Bashir’s ouster amid nationwide protests against his three-decade-rule.

The Sovereign Council includes five military member and five civilians appointed by the Forces for Declaration of Freedom and Change, which represents the protesters. An 11th member, a Coptic Christian judge, was appointed by the two sides.

According to the official news agency, nine members were sworn in before the country’s top judge and Burhan on Wednesday. The remaining member, Mohammed Hassan Al Taishi, will be sworn in later.

SUNA said the council held its first meeting in the capital of Khartoum after the members took the oath of office.

University professor Aisha Musa, a member at the Sovereign Council, called the swearing-in a “historic day” and vowed to work toward achieving “full civilian” administration.

“Your sovereign council has crowned your revolution, which came to achieve slogans of citizenship, peaceful coexistence, democracy and balanced development,” she said in a televised news conference after the meeting.

Raja Nicholas Issa, the Coptic Christian member on the council, said the council would start talks with armed groups to “make peace and achieve justice across the country.” Sudan has also been convulsed by rebellions in its far-flung provinces for decades, and the power-sharing agreement calls for the government to reach a peace agreement with the rebels within six months.

Among the military members on the council is Gen. Mohammed Hamadan Dagalo, who served as deputy head of the disbanded military council.

Dagalo, also known as Hemedti, has consolidated power since Bashir’s overthrow, and is the commander of the paramilitary Rapid Support Forces. Protesters accuse the RSF of leading the crackdown against them that started with the brutal break-up of their sit-in camp in Khartoum earlier in June.

The civilian members include two women and a journalist.

The power-sharing agreement, which was signed on Saturday, also includes a protest movement-appointed cabinet along with a legislative council with a majority from the Forces for the Declaration of Freedom and Change, the main protest coalition. The legislative body is to assemble within three months.

The pro-democracy movement appointed well-known economist Abdalla Hamdok to lead the transitional cabinet in a sign that overhauling Sudan’s ailing economy would be a top priority for the new administration.

Videos circulated online showed dozens of people waiting for Hamdok’s arrival at Khartoum international airport. They were heard chanting: “Blood for blood even if it’s civilian (government).” They were calling for justice for those who were killed in the uprising that started late last year, initially over bread and fuel shortages, but which shortly turned to calls for Bashir’s ouster. At least 250 people were killed since December.

Hamdok, who has served as the deputy executive secretary of the United Nations Economic Commission for Africa since November 2011, will be sworn in later on Wednesday. He holds a doctorate in economic studies from the University of Manchester in the UK. He was a senior official at Sudan’s Finance Ministry in the 1980s, before the Islamist-backed military coup in 1989 in which Bashir took over power.

He would form a cabinet not more than 20 ministers, but the military would nominate the defense and interior ministers.