Pakistan has raised concerns with Twitter after it blocked pro-Pakistan twitter accounts for tweeting in favour of Kashmiris and against India.


Over 200 twitter accounts were suspended by the microblogging site for spreading rumour and fake news in the wake of India revoking the special status of Jammu and Kashmir.

According to a report in daily The Express Tribune, the Pakistan telocom authority (PTA) has approached Twitter and lodged a protest over the suspension of accounts.

PTA has also demanded restoration of social media handles that post in support of Kashmiris. 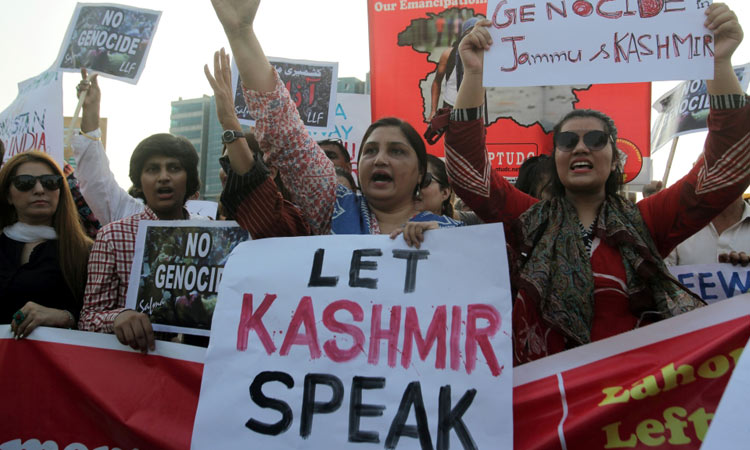 People carry signs as they shout slogans to express solidarity with Kashmiris, during a rally in Lahore. Reuters

In a tweet, the PTA said, "prima facie, this action is in violation of the policy and community standards of Twitter, and an attempt to stifle freedom of expression."

The Pakistani Twitter handles were suspended last week after India reported to Twitter and Facebook, accusing the users of sharing propaganda videos and images which claim to portray the current situation of Jammu and Kashmir.

Meanwhile, continuing with its diplomatic overdrive against India over the Kashmir issue, Pakistan Foreign Minister Shah Mahmood Qureshi held a telephonic talk with his French counterpart Jean-Yves Le Drian and urged France as a UN Security Council permanent member to play its role to ensure peace in the region.

Le Drian said that France was extremely concerned at the situation and urged both sides to engage in a bilateral dialogue.

Le Drian emphasised the need to ensure that there was no further escalation and underscored that they would have the same message for India, a Pakistan Foreign Office statement said.

Earlier, Qureshi briefed his French counterpart about the "illegal and unilateral" actions of India to alter the disputed status of Jammu and Kashmir "in contravention of the international law and UNSC resolutions."

He underlined that the steps taken by India in Kashmir "entailed a grave risk for peace and security in the region.

Qureshi expressed the hope that France, as a permanent member of the UN Security Council, would play its due role to ensure peace and stability in the region and urged France to impress upon India to lift the curfew and ameliorate the hardships and sufferings of the people in IoK, the statement said.

The two leaders agreed to remain in contact and continue to work together for peace and stability in the region.