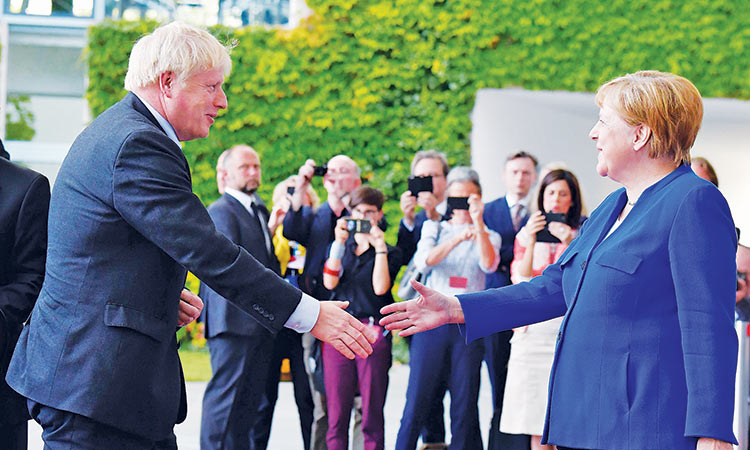 German Chancellor Angela Merkel greets Boris Johnson during a ceremony with military honours at the Chancellery in Berlin on Wednesday. Agence France-Presse

“Clearly we cannot accept the current withdrawal agreement, arrangements which either divide the UK or lock us into the regulatory and trading arrangements of the EU... without the UK having any say on those matters,” he said in Berlin.

Johnson is seeking to convince Merkel, and then French President Emmanuel Macron whom he visits on Thursday, to renegotiate elements of the UK’s impending divorce from the bloc, including the so-called Ireland backstop plan — something the EU leaders had already ruled out.

“So we need that backstop removed, but if we can do that I am absolutely sure we can move forward together,” Johnson told reporters.

Merkel voiced hope for a negotiated agreement within “30 days” for Britain to leave the EU while avoiding the Irish border backstop rejected by London.

The mechanism is meant for the period in which the other 27 EU members and London define their future relationship. “But maybe we can do it in the next 30 days, why not?” said Merkel at a Berlin joint press conference with Johnson, urging all sides to “make efforts to do so.”

Britain wants to do a swift Brexit deal but the “undemocratic” Irish border backstop must be axed in full to prevent a no-deal exit, Johnson told Merkel.

More than three years after the United Kingdom voted to quit the European Union, it is still unclear on what terms - or indeed whether - the bloc’s second largest economy will leave the club it joined in 1973.

“There is a ample scope to do a deal,” Johnson told reporters at the German Chancellery in Berlin. “I just want to be absolutely clear with all our German friends and with the German government that we in the UK want a deal.”

“We do need that backstop removed,” Johnson said beside Merkel. “But if we can do that then I’m absolutely certain we can move forward together.”

But with just over 10 weeks left until the scheduled departure, the EU has repeatedly said it will not renegotiate the Withdrawal Agreement struck by Johnson’s predecessor, Theresa May, and that it will stand behind member state Ireland.

Johnson and Merkel smiled as they shook hands but protesters outside the Chancellery gates shouted “Stop Brexit.” Johnson ignored a question from reporters about whether he expected a deal.

Merkel has promised to discuss “practical solutions” to the Irish border insurance policy or ‘backstop’ that Johnson says is unacceptable - but she said the Withdrawal Agreement will not be reopened.

Ahead of his first foreign trip as prime minister, Johnson said the EU was being “a bit negative”, but that a deal could be done. If not, he said, the United Kingdom would leave without one.

In Washington, US President Donald Trump, who has been enthusiastic about Brexit but critical of May’s negotiating strategy, offered Britain help while criticising the EU.

“They have not treated the UK very well,” he said. “That’s a very tough bargain they are driving, the European Union. We are going to see if we can work something out.”

Once the nightmare scenario on the extreme edge of probability ranges, a no-deal Brexit is now seen as a realistic possibility by both governments and investors. Amid political turmoil in London, little is clear. The alternatives are a delay, a last-minute deal, an election or even cancelling Brexit.

Ahead of Johnson’s meeting with Macron on Thursday, an official in the presidency who declined to be named said France believed no-deal was now the most likely scenario:

“If the United Kingdom considers that having a backstop is absolutely excluded, that is its right, but in that case it limits the possibility of reaching an agreement.”

The official said there was “not the thickness of a cigarette paper” between the French and German positions, and even pressure from Trump would not change the EU’s position.

With talk of an election swirling in Britain, an online survey suggested Johnson’s tougher stance on Brexit was dramatically reviving his Conservative party’s fortunes.

The Kantar opinion poll put the Conservatives on 42%, up from 25% in May, when the last comparable poll was taken, and the main opposition Labour party on 28%, down from 34%. 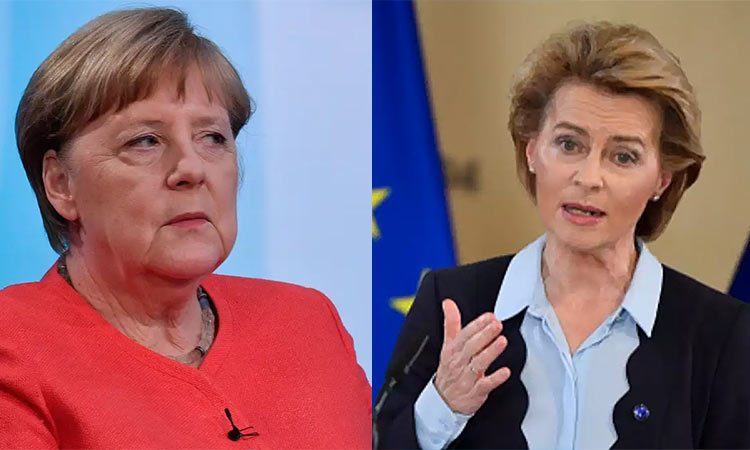 So much for the new, self-disciplined Boris Johnson who has banned gaffes and jokes during a public health crisis. The prime minister quipped to a private meeting of Conservative MPs that the UK’s success on vaccines was due to “greed” and 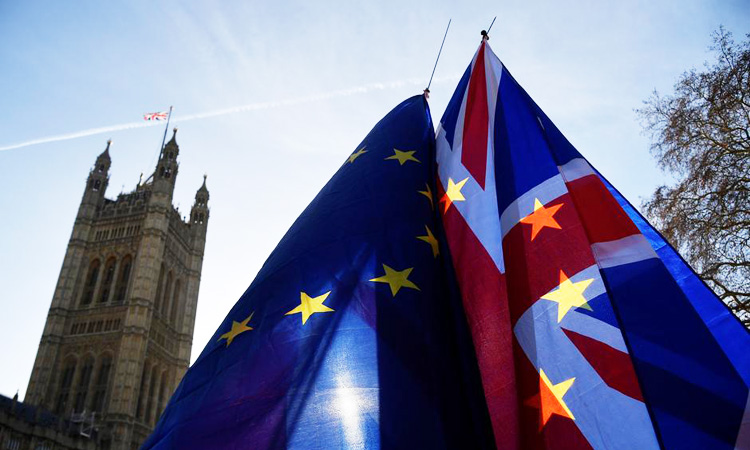 Johnson, Merkel to face off in first Brexit talks

British Prime Minister Boris Johnson visits Berlin on Wednesday to kick off a marathon of tense talks with key European and international leaders as the threat of a chaotic no-deal Brexit looms. 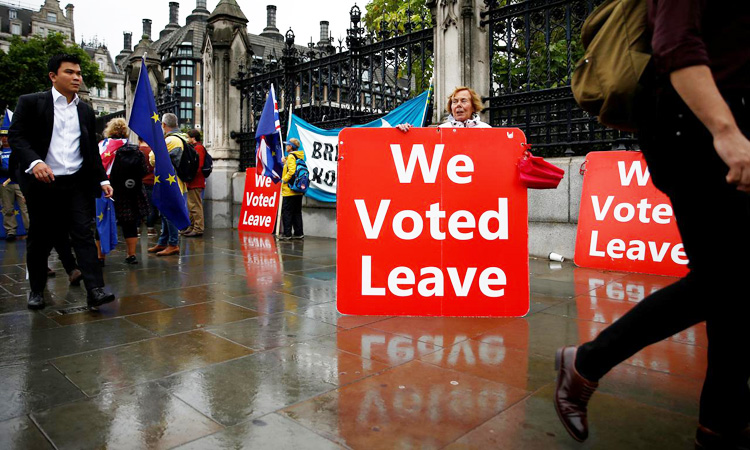 A Brexit deal is essentially impossible as German Chancellor Angela Merkel has told Britain's Prime Minister Boris Johnson that to do one Northern Ireland must stay in the European Union's customs union,