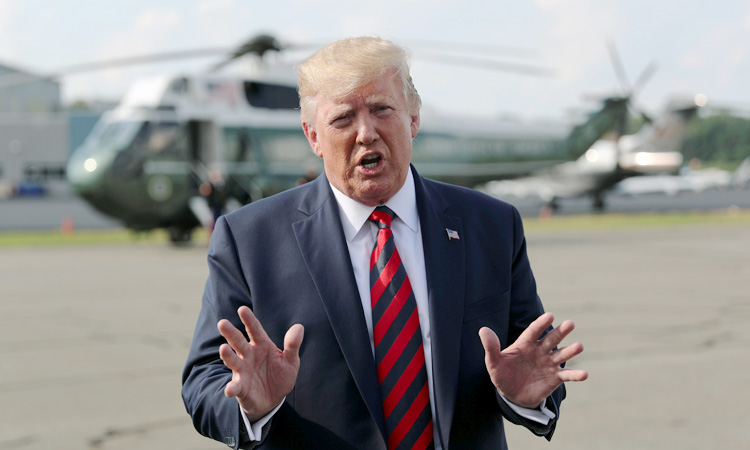 Trump speaks to reporters before boarding Air Force One to return to Washington. Jonathan Ernst/ Reuters

The White House is considering cutting taxes or reversing tariffs to head off a recession, US media reported on Monday, despite President Donald Trump’s insistence the economy was in rude health.

Also under consideration is reversing new tariffs the Trump administration imposed on Chinese goods, according to The New York Times.

The discussion is still in the early stages, and officials have not brought up the idea with Trump, who would have to seek approval from Congress, the newspapers said.

The White House disputed the reports in a statement to the Post, saying “cutting payroll taxes is not something under consideration at this time.”

Trump on Sunday pushed back against talk of a looming recession after a raft of US data reports last week gave a mixed outlook for the economy.

“And most economists actually say that we’re not going to have a recession.”

Earlier on Monday, a survey was released showing that a majority of economists expect a US recession in the next two years — right around the time of the 2020 election in which Trump is standing for a second term.

Only two per cent of the survey’s 226 respondents predicted a recession this year, but 38 per cent expected a downturn to hit in 2020 and 34 per cent in 2021, according to the polls from the National Association for Business Economists.

Payroll taxes were cut temporarily during President Barack Obama’s term in 2011 and 2012, in an effort to counteract a sluggish recovery from the 2008 recession.

The White House was asking Congress on Tuesday to approve a sweeping emergency stimulus package to help businesses and taxpayers cope with the economic fallout of the coronavirus pandemic.