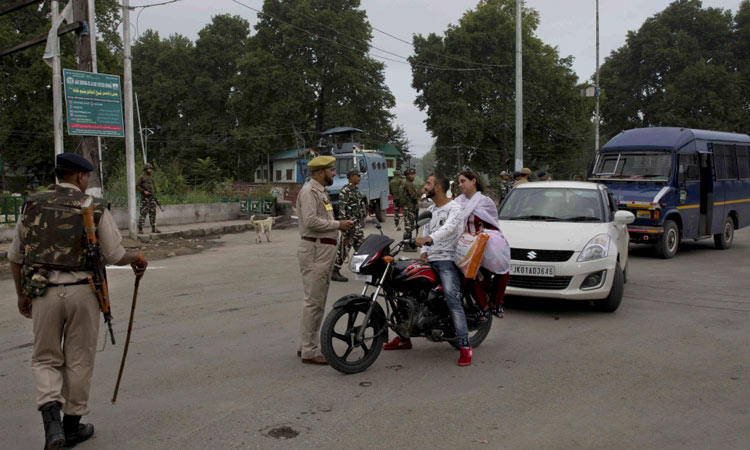 A police man interrogates a Kashmiri couple before turning them back at a checkpoint during security lockdown in Srinagar on Thursday. AP

The UN Security Council met behind closed doors for the first time in decades on Jammu and Kashmir, and Pakistan's UN ambassador says the session showed that people in the region "may be locked up... but their voices were heard today at the United Nations." Maleeha Lodhi told reporters after Friday's council consultations, which focused on India's recent downgrading of Kashmir's autonomy, that "this is the first and not the last step" and "It will only end when justice is done to the people of Jammu and Kashmir."

"This is the first time in over 50 years that this issue has been deliberated upon by the Security Council," Lodhi said. "I think this meeting nullifies India's claim that Jammu and Kashmir is an internal matter for India." The Security Council took no action during the closed meeting, which was called for by China and Pakistan.

Chinese UN Ambassador Zhang Jun said council members expressed "serious concern" at the current situation in Jammu and Kashmir including "about the human rights situation there." "It's the general view of members that parties concerned should refrain from taking any unilateral action which might further aggravate the tension there, since the tension is already very tense and very dangerous," he said.

He said the international community's consensus is that the status of Kashmir is undecided, it is "an internationally recognized dispute" and should be resolved peacefully in accordance with the UN Charter, UN Security Council resolutions and bilateral agreements.

Hundreds of protesters in Indian-administered Kashmir clashed with police on Friday as the UN Security Council began its first meeting on the territory in nearly half a century, with tensions soaring over New Delhi's move to strip the disputed region of its autonomy.

New Delhi ended the autonomous status of its portion of the Muslim-majority territory in the first week of August, stepping up movement restrictions and cutting off phone and internet access to head off civil unrest, and igniting calls from Pakistan for the international community to intervene.

Police fired tear gas and pellet-firing shotguns to disperse residents who tried to march down the main road in the main city of Srinagar after Friday prayers.

Protesters hurled stones and used shop hoardings and tin sheets as improvised shields, as police shot dozens of rounds into the crowd. No injuries were reported.

"We are trying to breach the siege and march to the city centre but police is using force to stop us," one protester told AFP.

Friday's Security Council meeting in New York — the first to discuss Kashmir since 1972 — came as Khan spoke to Trump by telephone to express his concerns over India's actions, according to Pakistani foreign minister Shah Mehmood Qureshi.

"A good discussion took place between both leaders and it was decided that they will remain in constant contact," he said in Islamabad.