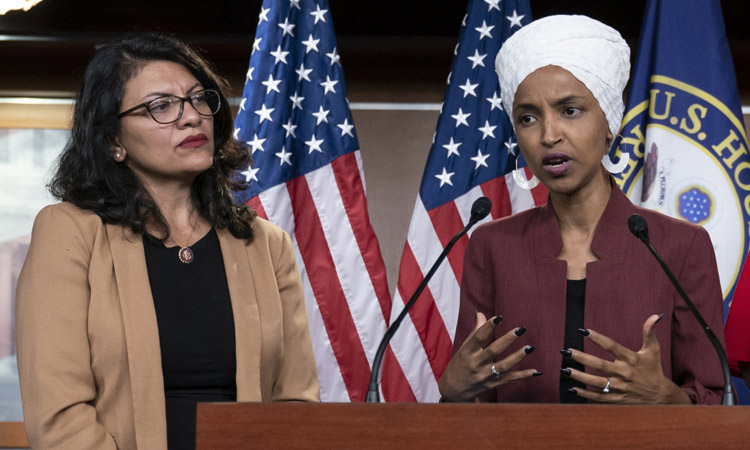 Ilhan Omar speaks as Rashida Tlaib listens during a news conference at the Capitol in Washington. File / AP

Israel said on Thursday that it will bar two Democratic congresswomen from entering the country ahead of a planned visit over their support for a Palestinian-led boycott movement, a decision announced shortly after President Donald Trump tweeted that it would “show great weakness” to allow them in.

Ilhan Omar called Israel's decision on Thursday to ban her from visiting the country "chilling," saying denying entry to sitting members of the US Congress was an "insult to democratic values." 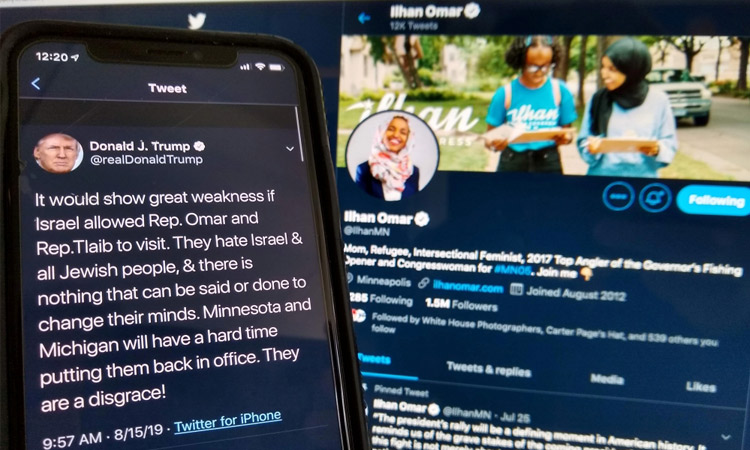 A screengrab of Donald Trump's Tweet on Ilhan Omar.

"It is an affront that Israeli Prime Minister (Benjamin) Netanyahu, under pressure from President (Donald) Trump, would deny entry to representatives of the US government," Omar said in a sharply worded statement that highlighted her role of conducting oversight of how US foreign aid is spent abroad.

"The irony of the 'only democracy' in the Middle East making such a decision is that it is both an insult to democratic values and a chilling response to a visit by government officials from an allied nation," she added.

The two newly-elected Muslim members of Congress are outspoken critics of Israel’s treatment of the Palestinians and have repeatedly sparred with Trump over a range of issues. Tlaib’s family immigrated to the United States from the West Bank, where she still has close relatives.

MIFTAH, the Palestinian organisation that was set to host Tlaib and Omar in the West Bank, issued a statement saying that Israel’s decision was “an affront to the American people and their representatives” and “an assault on the Palestinian people’s right to reach out to decision-makers and other actors from around the world.” The move could further sharpen divisions among Democrats over Israel ahead of the 2020 elections. Republicans have amplified the views of left-wing Democrats like Tlaib and Omar to present the party as deeply divided and at odds with Israel. Democratic leaders have pushed back, reiterating the party’s strong support for Israel, in part to protect representatives from more conservative districts.

Prime Minister Benjamin Netanyahu said Israel is “open to critics and criticism,” except for those who advocate boycotts against it.

“Congresswomen Tlaib and Omar are leading activists in promoting the legislation of boycotts against Israel in the American Congress,” Netanyahu charged. He said their itinerary “revealed that they planned a visit whose sole objective is to strengthen the boycott against us and deny Israel’s legitimacy.”