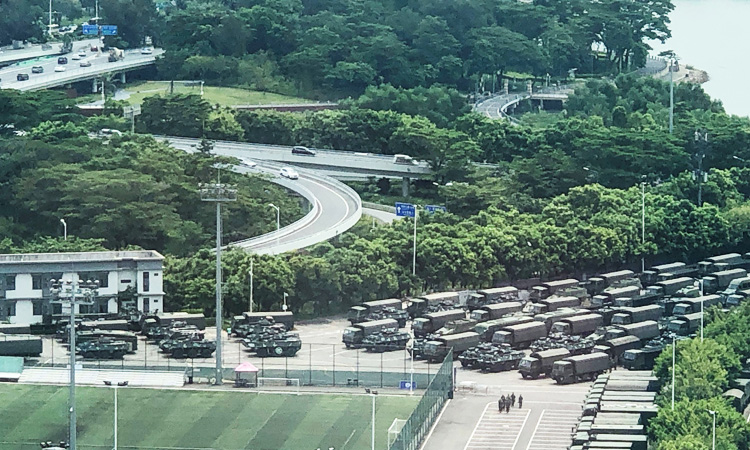 Trucks and armoured personnel carriers are seen outside the Shenzhen Bay stadium in Shenzhen on Thursday. AFP

Thousands of Chinese military personnel waving red flags paraded at a sports stadium in a city across the border from Hong Kong on Thursday, an AFP reporter witnessed.

Armoured vehicles were also seen inside the stadium in Shenzhen, with the event taking place as concerns build that China may intervene to end 10 weeks of unrest in Hong Kong.

State-run media reported this week that the elements of the People’s Armed Police (PAP), which is under the command of the Central Military Commission, were assembling in Shenzhen. 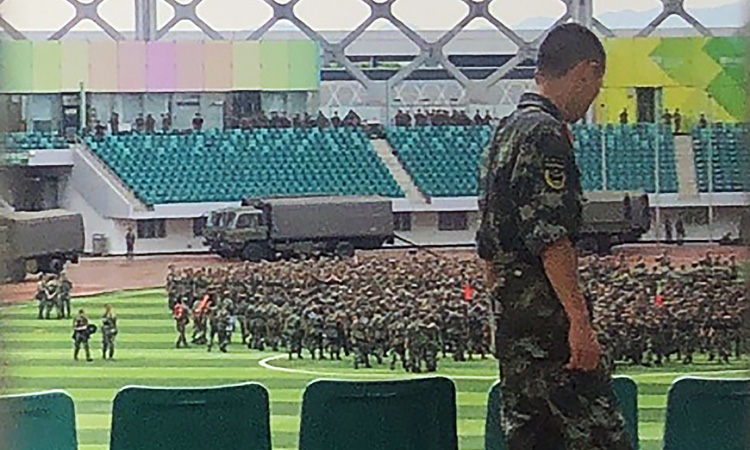 Some of the personnel inside the stadium on Thursday had armed police insignias on their camouflage fatigues, according to the AFP reporter.

The security forces could be seen moving in formation inside the stadium, and occasionally running, while others rode around outside on motorbikes.

Outside the stadium — which is around 7 kilometres (4.5 miles) from Hong Kong — there were also dozens of trucks and armoured personnel carriers.

“I don’t know why they’re here, but it could be related to Hong Kong,” a ticket vendor at the stadium told AFP. 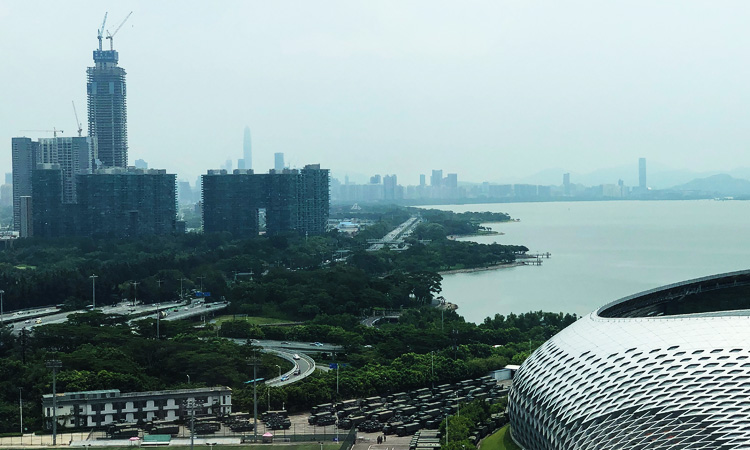 The People’s Daily and Global Times, two of the most powerful state-run media outlets, published videos on Monday of what it said was the PAP assembling in Shenzhen.

The Global Times editor-in-chief, Hu Xijin, said the military presence in Shenzhen was a sign that China was prepared to intervene in Hong Kong.

“If they do not pull back from the cliff and continue to push the situation further beyond the critical point, the power of the state may come to Hong Kong at any time,” Hu wrote.

The Asian financial hub has been governed under a “one country, two systems” legal framework since its handover to China from Britain in 1997.

Hong Kong allows far greater civil liberties than those on the mainland, but the protesters say those freedoms are eroding as mainland Chinese interference grows.

The protests, which have become increasingly violent and led to Hong Kong’s airport being paralysed for two days this week, have become the biggest threat to China’s rule since the handover.

The Chinese military has not interfered in Hong Kong since the handover but it can should it be called on by the city’s government to maintain “public order.”

James Char, a military expert at Singapore’s Nanyang Technological University, said the deployment to Shenzhen was both to project an image of domestic strength as well as "a carefully calculated message to the protesters to think twice about growing or continuing with their recent intensified demonstrations.”

"We can be certain the regime understands that sending in troops to Hong Kong will inflame the protests and the protesters’ anti-China grievances,” he said.

The PAP are in charge of "handling riots, turmoil, seriously violent, criminal activities, terrorist attacks and other societal security incidents,” the People’s Daily said in text accompanying its video on Monday.

Chinese authorities have on two occasions this week linked violent protests in Hong Kong to “terrorism.” They have consistently described protesters as “rioters.”