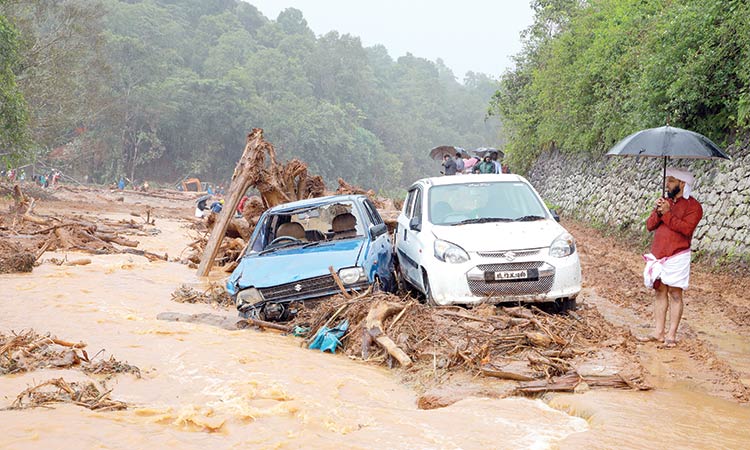 A man stands next to damaged cars after a landslide in Wayanad, Kerala, on Wednesday. Reuters

Floods and landslides have killed more than 270 people in India this month, displaced one million and inundated thousands of homes across six states, authorities said on Wednesday after two weeks of heavy monsoon rains.

The rains from June to September are a lifeline for rural India, delivering some 70 per cent of the country’s rainfall, but they also cause death and destruction each year.

The southern states of Kerala and Karnataka, and Maharashtra and Gujarat in the west, were among the hardest hit by floods that washed away thousands of hectares of summer-sown crops and damaged roads and rail lines.

In Karnataka, 54 people died and 15 are missing after rivers burst their banks when authorities released water from dams.

Nearly 700,000 people have been evacuated in the state.

Heavy rainfall is expected in parts of Karnataka, Maharashtra and Gujarat, as well as the central state of Madhya Pradesh, in the next two days, weather officials said.

In Maharashtra, 48 people died but flood waters are receding, said a state official.

“We are now trying to restore electricity and drinking water supplies,” he said.

In Gujarat, 31 people died in rain-related incidents, while landslides killed nearly a dozen people in the northern hilly state of Uttarakhand.

The Kerala cabinet on Wednesday approved a compensation package for the flood victims, including an immediate relief of Rs10,000, even as the toll since Friday rose to 102.

The rescuers are digging the sites of two worst landslides in Malappuram and Wayanad districts where dozens of people are believed to have been buried alive.

Authorities put the total people missing at 37 and grievously injured at 35.

At least 1,060 homes have been washed away or caved in after incessant rains and some 60 landslides.

They have opened 1,119 relief camps where 189,649 people from 58,508 families have taken shelter, mostly in northern and central Kerala.

Those who have lost their homes and land will get Rs1 million, he said.

He also announced 15kg free rice for fisher folks and families in the affected areas.

The Indian Meteorological Department sounded no red alert in any of the 14 districts of the southern state for Thursday as the intensity of rains started lessening.

Only Malappuram Kozhikode and Kannur remain under the orange alert.

It predicted strong winds from westerly direction speed reaching 45-55kph likely along and off Kerala and Karnataka coasts and warned fishers against venturing into the sea.

Skymet Weather said rain in Kochi had shattered all rainfall records this monsoon season receiving highest ever amount in August.

The port city recorded 820mm of rain till now, surpassing its all-time high rainfall record that stood at 783.5mm in August 2014.

“This is almost twice the monthly average rainfall of 379 mm that too during the first half of August itself,” it said.

“With Monsoon being vigorous, we expect Kochi rains to set a new record in the coming days. The city has been recording some incessant rains this month.” Heavy rains are likely to continue over the city for another 24 hours on account of an active off-shore trough running the West Coast, particularly over Kerala.

“This may lead to flooding in some areas as well,” it said.

“However, rains would reduce marginally but moderate rains and thundershowers with few intense spells to continue over north and central Kerala until Saturday.” After that, it says, rains would reduce as an anticyclone is likely to come up in the southeast Arabian Sea, and due to this, winds would change from westerly to north-westerly that would not be conducive of monsoon rains.