Ecological disaster on Greek island as fire burns on - GulfToday

Ecological disaster on Greek island as fire burns on 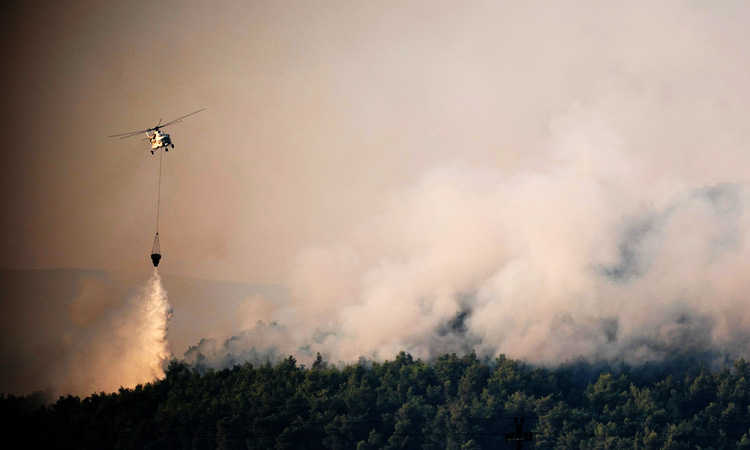 A firefighting helicopter drops water over a fire near the village of Makrimalli on the island of Evia, Athens. Angelos Tzortzinis/ AFP

Firefighters on the Greek island of Evia were still battling on Wednesday to contain a fire that has caused massive damage to a pristine mountain wildlife habitat after threatening four communities.

The fire that broke out in the early hours of Tuesday on Greece’s second-largest island prompted the evacuation of the villages of Kontodespoti, Makrymalli, Stavros and Platana, and threatened the town of Psachna during the night, officials said.

“From Psachna to Kontodespoti and Makrymalli everything has been burned down. It’s fortunate that we do not have human victims,” Thanassis Karakatzas, a deputy regional civil protection officer, told state agency ANA.

Over 200 firefighters were in action backed by 75 fire trucks, nine water-bombing helicopters and seven planes along a 12-kilometre (seven-mile) front, managing to avert damage to inhabited areas.

An Italian water bomber was expected to join the fray later in the day after Greece requested EU assistance. A second Italian plane and two more from Spain were due to arrive by the evening.

Three ambulances were stationed close to the area as a precaution, health minister Vassilis Kikilias said in a tweet.

He added that there were no injuries or respiratory problems that required hospitalisation at the height of the emergency on Tuesday.

Greece has been hit by a spate of wildfires since the weekend, fanned by gale-force winds and temperatures of 40 degrees Celsius (104 Fahrenheit).

Prime Minister Kyriakos Mitsotakis, who cancelled his summer vacation and returned to Athens on Tuesday, acknowledged that the fire crews had had a gruelling battle, with the fire department handling about 50 blazes daily.

“I am aware that our firefighters, particularly over the last five days, have given their all, they are without sleep and often without food,” Mitsotakis said.

Other fires on Tuesday were contained on the island of Thassos, the central region of Viotia, and in the Peloponnese region.

On Monday, a major forest fire threatening homes in Peania, an eastern suburb of Athens, was brought under control. At least two houses were burned but there were no reports of injuries.

On Sunday, a fire on the small island of Elafonissos, in the Peloponnese, was brought under control after a two-day battle.