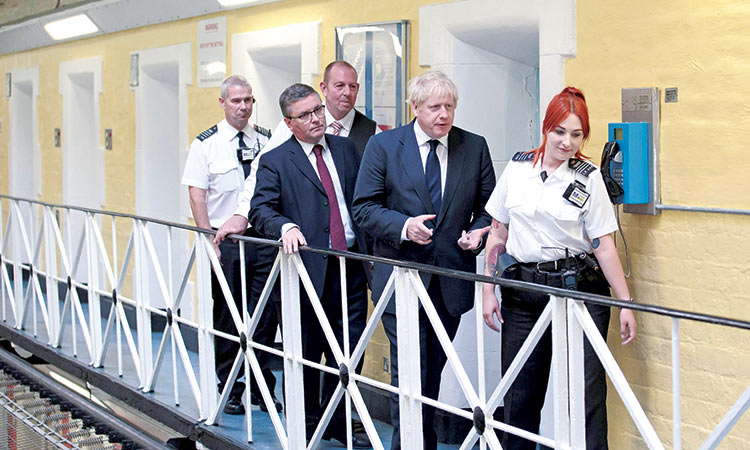 Boris Johnson talks with staff during a visit to HM Prison Leeds in England on Tuesday. Agence France-Presse

A legal bid to prevent British Prime Minister Boris Johnson suspending parliament to stop lawmakers blocking a no-deal Brexit will be heard at a Scottish court next month.

A group of about 70 lawmakers from opposition parties are backing a bid to have Scotland’s highest civil court rule that Johnson cannot ask Queen Elizabeth to prorogue, or suspend, parliament before Britain leaves the European Union (EU) on Oct.31.

The case had its first court outing on Tuesday at which the Court of Session decided that a substantive hearing would take place on Sept.6, said lawyer Jo Maugham from the Good Law Project which is supporting the challenge.

English courts do not sit in August.

Johnson has said Britain will leave the world’s biggest trading bloc on Halloween whether it has a divorce agreement or not and that also remains the legal default position.

However, a majority of lawmakers in parliament have previously indicated they would not allow a no-deal Brexit.

They have been investigating what parliamentary procedures can be used to prevent such an outcome, and in July backed proposals to make it harder for Johnson to force through any departure without a deal.

In June, House Speaker John Bercow said it was “blindingly obvious” that the prime minister could not sideline parliament.

“That is simply not going to happen,” he said.

However, Johnson, who replaced Theresa May on July 24 after she failed three times to get her withdrawal agreement through parliament, has refused to rule out proroguing the House of Commons and Brexit supporters have vociferously encouraged him to do so if necessary to ensure an exit on Oct. 31.

“We’re asking the court to declare that the prime minister can’t advise the queen to suspend parliament and stop it voting on no deal,” said one of the lawmakers in the challenge, Ian Murray.

“If the court agrees, then Boris Johnson will not be able to suspend the Commons for that purpose without parliament’s permission.”

Brexit opponents say a no-deal divorce would bring disruption at borders and cause significant economic damage, tipping Britain into a recession. Supporters of Brexit say while it might cause some short-term issues, fears are overblown and Britain will thrive outside the bloc.