New rule could disqualify half of US visa applicants - GulfToday

New rule could disqualify half of US visa applicants 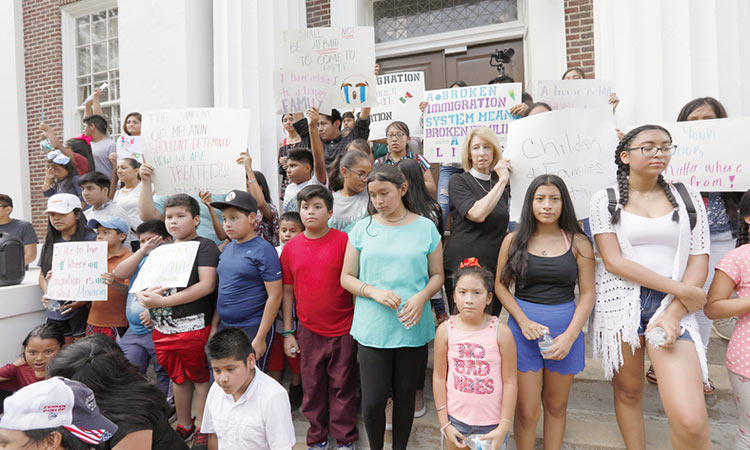 Residents hold signs in support of individuals picked up during an immigration raid in Canton on Sunday. Associated Press

US President Donald Trump’s administration unveiled a new rule on Monday that could deny permanent residency to hundreds of thousands of people for being too poor.

The long-anticipated rule, pushed by Trump’s leading anti-immigration aide Stephen Miller, takes effect in mid-October and would reject applicants for temporary or permanent visas for failing to meet income standards or for receiving public assistance such as welfare, food stamps, public housing or Medicaid.

Such a change would ensure that immigrants “are self-sufficient,” in that they “do not depend on public resources to meet their needs, but rather rely on their own capabilities, as well as the resources of family members, sponsors, and private organisations,” a notice published in the Federal Register said.

This could be the most drastic of all the Trump administration’s anti-immigration policies, experts have said.

Advocates for immigrants have criticised the plan as an effort to cut legal immigration without going through Congress to change US law.

Under the new rules, more than half of all family-based green card applicants would be denied, according to the Migration Policy Institute, a research organisation.

Most nonresident immigrants are ineligible for the major aid programmes until they get green cards, but the new rule published by the Department of Homeland Security expands the definition of a public charge that stands to disqualify more people.

Applicants will now need to show higher levels of income to get a visa, and the rule greatly expands the list of government benefits that would disqualify them from obtaining US residency.

House Speaker Nancy Pelosi said she sees comprehensive immigration reform not only as Congress’ official work but also as its moral responsibility as she finishes up a tour of Central America.

Pelosi travelled with a congressional delegation to explore the causes of immigration and possible solutions. The group visited Guatemala and El Salvador, along with migrant detention facilities in McAllen, Texas.

The Democratic speaker said on Sunday in Texas that she made the trip because she wanted to ensure that the US effectively honours the dignity of the immigrants who enter its borders.

Meanwhile, it was on the third day of a five-day bus tour across Iowa last week that 2020 White House contender Kamala Harris finally seemed to hit her stride.

Armed with fresh endorsements from two of the state’s most sought after political influencers early on Saturday, the US Senator from California got an enthusiastic welcome from over 500 people at a Des Moines area high school.

For the first time during her tour that started on Thursday, the crowd began chanting Harris’ new slogan about Republican Donald Trump’s presidency: “Dude gotta go!”

The country needs a leader who can “prosecute the case against Donald Trump” and “it will take a prosecutor to do it,” Harris, California’s former top prosecutor and a former district attorney of San Francisco, told the audience. “And we’ve got quite the rap sheet.”

Harris, 54, is among two dozens Democrats vying for the party nomination to take on Trump in the November 2020 election.

Months after entering the presidential race as a relatively fresh face on the national stage, Harris, who is of Jamaican and south Asian descent, has ranked fourth in most national opinion polls, behind former vice president Joe Biden and liberal US Senators Elizabeth Warren of Massachusetts and Bernie Sanders of Vermont.

Her surge in support after the first Democratic presidential debate in June in Miami, where she successfully challenged Biden’s record on race, had dissipated by the second debate in July in Detroit, where she was attacked by lesser-known rivals.

A Reuters/Ipsos poll taken on Aug.1-5 showed that Biden remained in first place with 22% support, relatively unchanged from the month before. Harris was in fourth, dropping 4 points to 5.7% support over the same time period.