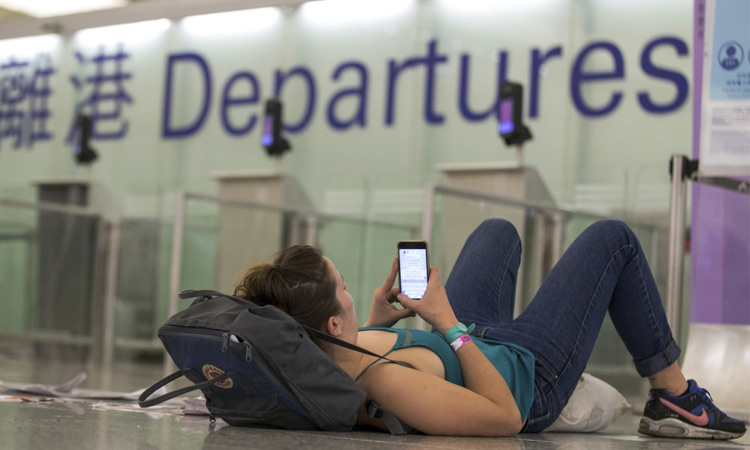 A traveller leans on her bag while browsing her smartphone at the departure hall of the Hong Kong airport on Monday. AP

Hong Kong's airport halted flights on Monday, blaming demonstrators for the disruption, while China said the anti-government protests that have swept the city over the past two months had begun to show "sprouts of terrorism."

The airport authority said it was working with airlines to resume flights from 6:00am on Tuesday, but the developments raise the stakes sharply after a weekend of skirmishes during which both activists and police toughened their stances. 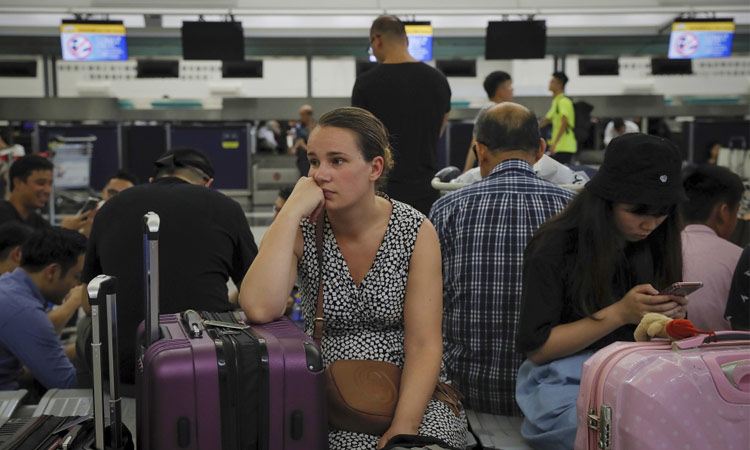 Australian Penny Tilley reacts next to stranded travellers at the closed check-in counters at the Hong Kong Airport. AP

Some flights of the Emirates Airlines and Etihad Airways to and from Hong Kong International Airport were affected by Hong Kong authorities’ decision on Monday to cancel all flights scheduled to take off from their territory. 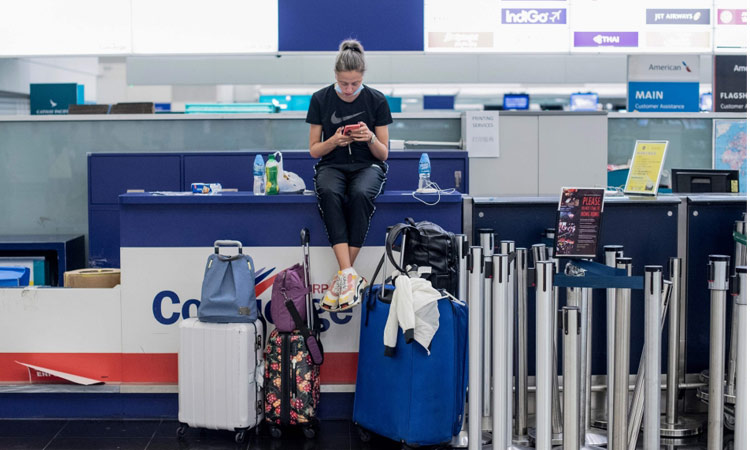 A traveller rests at a check-in booth at Hong Kong's airport on Monday. AFP

Malaysia Airlines said it would be cancelling its flights between Malaysia and Hong Kong until Tuesday afternoon. 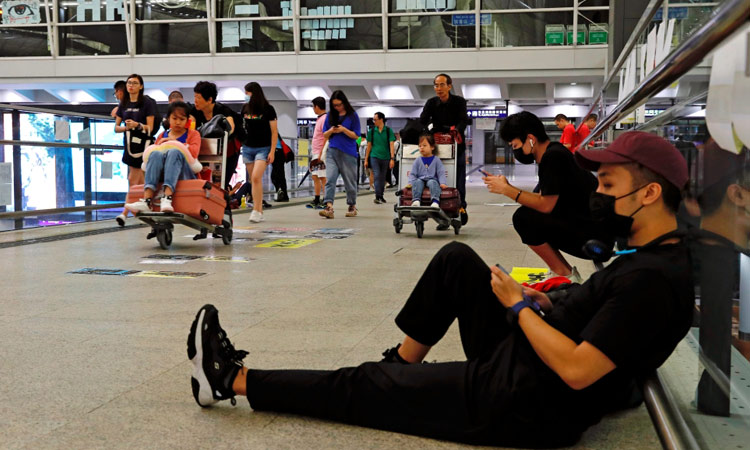 The Emirates Airlines confirmed that due to the protests at the Hong Kong International Airport, its round trip flight EK 384/385 between Bangkok and Hong Kong on Monday was cancelled, while its flights EK386, EK387, EK 381 and EK383 would be delayed.

The carrier said it was monitoring the situation closely and passengers would be notified in case of any changes in its operations.

Passengers with round trip airway tickets between Hong Kong to Bangkok are advised to contact the local Emirates office and check the status of their flights. 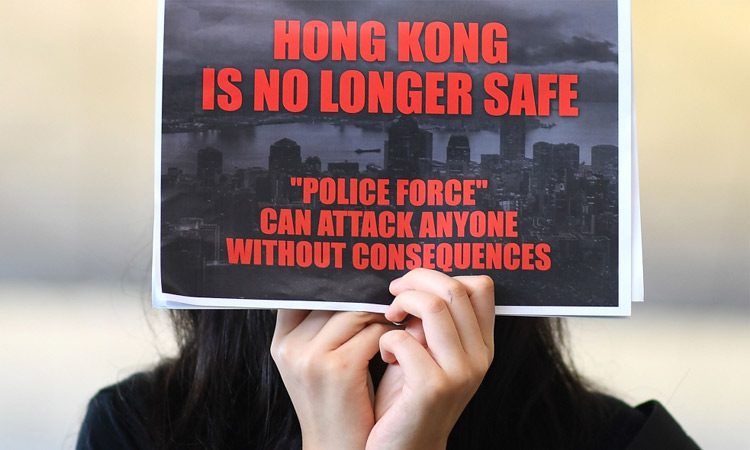 Some Hong Kong legal experts say official descriptions of some protesters' actions as terrorism could lead to the use of extensive anti-terror laws and powers against them.

China's People's Armed Police also assembled in the neighbouring city of Shenzhen for exercises, the state-backed Global Times newspaper said. The Communist Party's official People's Daily newspaper said on the Twitter-like Weibo that the force can handle incidents including riots or terrorist attacks.

Hong Kongers responded by taking to the streets again. 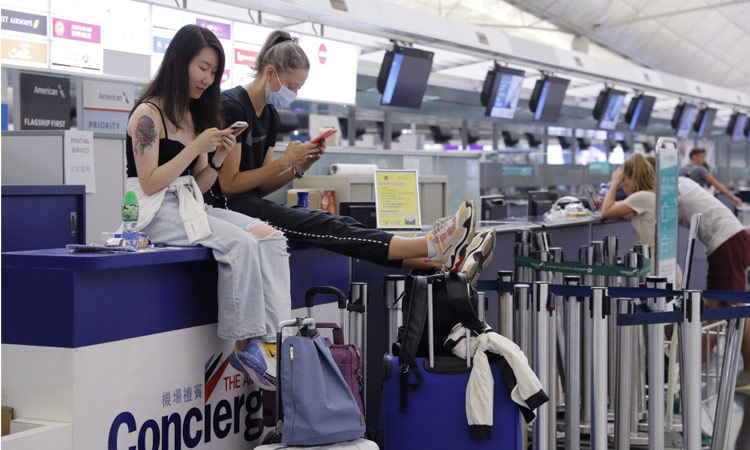 Stranded travellers from China, left, and Russia sit on the check-in counters at the Hong Kong airport. AP

The protests began in opposition to a bill allowing extradition to the mainland but have widened to highlight other grievances, winning broad support.

The precise trigger for the airport's closure was not clear, since protesters occupying the arrivals hall for four days have been peaceful. Hundreds remained there late on Monday, talking, resting and playing cards. 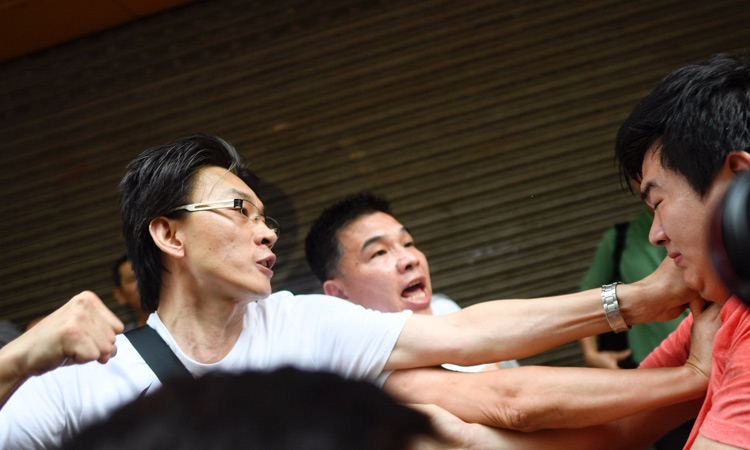 "This is about our freedom," said one of the thousands of protesters who stayed, a 24-year-old wearing a mask, who gave his name only as Yu. "Why should we leave?"

Hong Kong is the world's busiest air cargo port and the 8th busiest by passenger traffic, handling 73 million passengers a year. It has been filled with anti-government protesters for four days.

The activists at the airport have been polite and passengers mostly unperturbed. "I was expecting something, given all the news," one arrival, Gurinda Singh, told reporters. 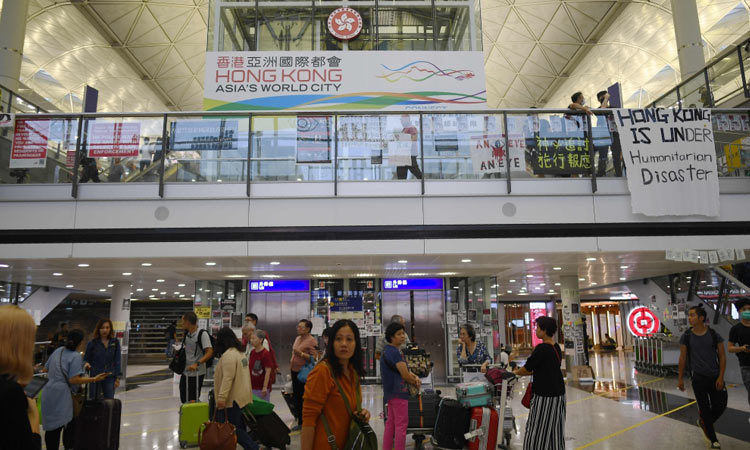 Some activists moved to the departure area and caused disruptions, police told a news conference as the cancellations were announced.

Police declined to say if they would move to clear the demonstrators. There was no visible police presence in either the departure or arrivals area.

"Airport operations at Hong Kong International Airport have been seriously disrupted as a result of the public assembly at the airport today," the city's airport authority said in a statement, without elaborating.