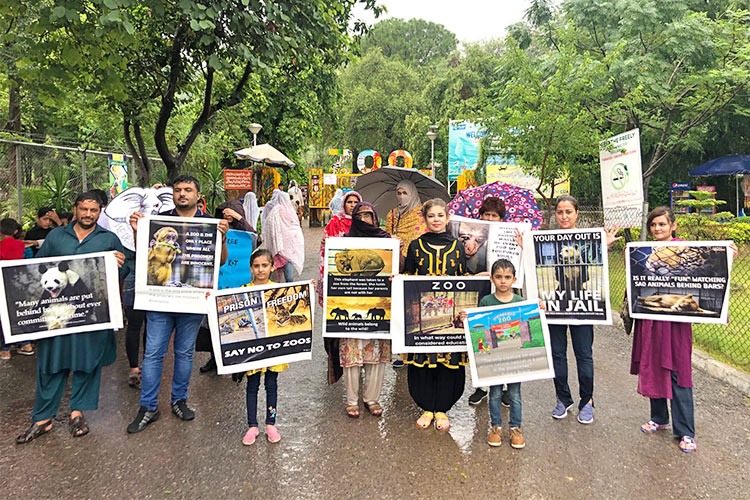 Residents take part in a protest outside Islambad Zoo.

Dozens of Pakistani animal lovers held a peaceful march against animal cruelty in Islamabad on Saturday.

Citizens of Pakistan and animal welfare organisation called for a protest to end animal cruelty especially at Zoos for public entertainment. The protest “#VoicefortheVoiceless: a peaceful demonstration against animal cruelty” took place outside the Islamabad Zoo on August 10th, 2019.

The march aims to compel the government and society to adopt humane practices and stop animal cruelty immediately at public entertainment places such as the Islamabad Zoo.

Thousands of animals suffer every day in Pakistan by a lack of humane treatment.

Activists staged their demand in front of the Islamabad Zoo, asking the Pakistan government to take immediate action to help animals.

Pakistani actor Mishi Khan said, “The elephant, Kavan, is living alone and suffering. The cage where he is kept and where he lives is so dirty. They give him dirty food to eat. The elephant love to eat apples, sugarcane, and watermelons.

“Kavan is mentally stressed. He needs to walk 50km a day and now he is just moving daily in small cage.”

Mishi said the bear is also suffering and is in a miserable condition.

Anila Umair, founder of CAWO, the non-profit organisation that rescues stray animals and birds in Islamabad and Rawalpindi said: “The animals are suffering in zoo. How can one be a proud Pakistani when we treat animals like this? This is disgusting beyond belief. The way we treat animals in this country is like holding up a mirror to the reality that is our moral-less character as a nation.”

“The zoo is in the hands of the government and because of their own internal issues, the animals have to pay the price.

“Why do we purchase such expensive animals when we treat them like this because human beings cannot contain their egos and sort out their problems?

“Why animals have to go through all of this? Animals can’t speak we have to raise voice for them.

These zoos should be ban and the animals in zoo should be provided with natural environment. They should make some good safari park or sanctuary. For me wild should be live in the wild.”

For a long time, the state is silent on the matter of animal rights. This upcoming protest is a step ahead towards highlighting the fundamental requirements of animals: provision of food, vaccination and most importantly, the humane treatment of these voiceless creatures.

The practices involved at such enclosures result in inhumane treatment of these voiceless souls. We keep them away from their natural habitat, without providing sufficient facilities resulting in complicated diseases and eventual death.

Most of the participants said they learnt about the protest on social media.

Captive animals are subject to brutal living conditions and are often killed in Pakistan due to lack of interest in their wellbeing while they are ill. We urge the government to adopt a humane system of treating animals in captivity. Since humanity comes first, animals have a significant place in the environment.

It’s certainly an alarming situation where such brutality must be stopped while at the same time effective and compassionate alternatives should be adopted.

Protesters demand that general public of Pakistan together with the government can make a difference to succeed in accomplishing animal rights.