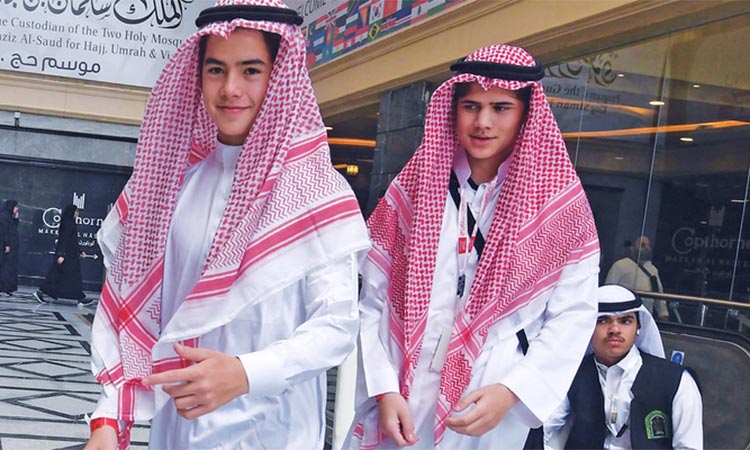 Two hundred survivors and relatives of victims of March’s massacres at two mosques in Christchurch, New Zealand, are undertaking the Hajj pilgrimage in Saudi Arabia to “pray for the martyrs.”

“I want the world to know who Atta Elayyan was,” said 27-year-old Farah Talal, dressed in a green djellaba robe and an elegant white scarf during her visit to Islam’s holiest city.

“He was a wonderful person, generous, I want to pay tribute to him,” murmured the young woman of Jordanian-origin who, along with 200 others affected by the massacre, was invited to the Hajj by Saudi’s King Salman.

Authorities have said they hope to “ease their suffering” as part of “the kingdom’s efforts in response to terrorism.”

The survivors and relatives of victims were given a heroes’ welcome as they arrived on Aug.2.

They were also greeted by the flashes of press cameras. The Hajj, the high point of the Islamic calendar, began on Friday.

Drawing in more than two million Muslims from around the world, it will last five days.

Atta Elayyan, of Palestinian-origin, ran an app development company and played goalkeeper for New Zealand’s national futsal side. He left behind a two-year-old daughter.

“He gave us the strength to carry on every day. He is a martyr, just like all the other victims of the carnage,” said Talal of her husband in a vast hotel complex reserved for guests of the Saudi royal family.

“I was in school on March 15,” said Khan, his green eyes glistening as he wore a traditional shalwar kameez. “I was very shocked, I didn’t have any reactions... I couldn’t believe it... I loved him so much.

“It will be very hard without him, but I’m thankful to be in Makkah today. I’m doing Hajj for my father, to pray for him.”

His friend Chouaib Milne, 16, lost his brother Sayyad Milne — two years his junior — when he was killed while praying in Christchurch’s Al Noor mosque, one of the two places of worship targeted.

“I was supposed to be at Friday prayers with my brother, but I was on a school trip,” he said, wearing a white shalwar kameez, along with a red and white checkered headscarf.

“When I’m at the Kaaba,” the cubic structure in the Grand Mosque that is Islam’s holiest site and towards which all Muslims pray, “I will pray for my brother and do Hajj for my brother,” Milne added.

Many Muslims in Christchurch were affected by the bloodshed, in a country where Muslims make up one per cent of the population.

Afghan Taj Mohammad Kamran, 47, recounted how the attacker “shot me in my leg (and) after (that) shot one of my friends -- he was lost.”

Kamran, his head wrapped in a turban, was shot three times in total and now walks with crutches. “Before I had too much depression. Now I come here, I relax — all Muslims want Hajj.”

Tens of thousands of security personnel, including more than 17,000 civil defence employees, are deployed to help safeguard pilgrims, officials say.

Thousands of security cameras have been set up along the pilgrimage route.

Twenty-five hospitals, 156 health centres and more than 30,000 health practitioners have been prepped to provide emergency services to pilgrims, according to state media and the Hajj ministry.

Some 350,000 air-conditioned tents have been set up to house pilgrims, a Saudi official said. More than 5,600 hotels and apartment buildings in Makkah and Madina — with a capacity to host 2.7 million people — are dedicated to pilgrims, according to state media.

Etihad will also operate six charter flights dedicated to the General Authority of Islamic Affairs, Sheikh Zayed Foundation and Abu Dhabi police. The outbound flights will operate from Abu Dhabi to Jeddah and Medina between Aug.1-5, with return flights scheduled for Aug.16-17.