‘Pak has many legal options to counter Indian move’ - GulfToday

Pak has many legal options to counter Indian move: Experts 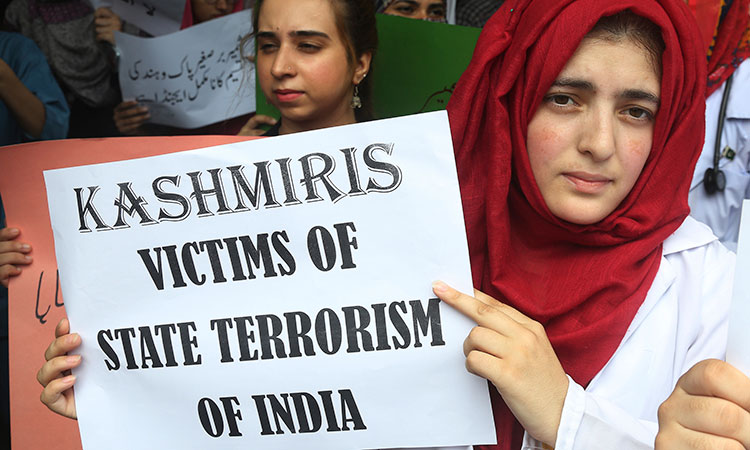 Pakistan has several legal options in response to the recent unprecedented decision taken by the Indian government, revoking Article 370 of its constitution, stripping the Indian Held Kashmir (IHK) of its special status.

India has revoked the special status of IHK and rushed through a presidential decree in a bid to fully integrate its only Muslim-majority region with the rest of the country, hours after imposing a major security clampdown in the region.

Meanwhile, Prime Minister Imran Khan has constituted a seven-member committee to recommend legal, political, and diplomatic responses to the annexation of the occupied Kashmir by India.

An official notification said the prime minister has formed with immediate effect a seven-member team who will make recommendations to formulate th legal,political and diplomatic response on the latest developments related to Indian Held Kashmir.

Pakistan in response was quick to reject the decision, declaring it as violation of the United Nations Security Council (UNSC) resolutions since Kashmir is an internationally-recognised dispute. Legal observers believe that in order to cope with the recent situation arising out of the Indian government’s move, Pakistan can adopt several legal options.

First and foremost, Islamabad can approach the UNSC that exercises jurisdiction both under chapters 6 and 7 of the UN Charter over both “disputes” and “situation” likely to endanger international peace and security, said Ahmer Bilal Sufi, senior advocate of the Supreme Court.

He said that what India has been doing in terms of military build-up and constitutional amendment constitutes both a dispute and a situation likely to endanger peace of South Asia and therefore Security Council ought to take notice of these developments.

Sufi being an expert on international law said that UN secretary general needs to be apprised of these developments as he has a mandate under independent resolution of 1998 to update measures that India and Pakistan have taken.

“These remain major legal forums and Pakistan can attempt after appropriate homework to consider approaching the UN General Assembly as well,” Ahmer Bilal told The News. Apart from these options, he was of the view that some research needs to be undertaken to explore if the International Court of Justice (ICJ) could be approached or not. Further, he said that Pakistan can insist on the special session of the OIC and SCO as well.

Sufi said that Pakistan also needs to approach relevant capitals of the world as Indian violation of international law and that of bilateral treaties and that of its own constitution is patent and self-evident.

Shah Khawar, another senior expert on international law, said that ICJ is the principal court of the UN which settles international legal disputes submitted by the states. He said that it also renders advisory opinions as referred by the UN. “Pakistan can’t invoke jurisdiction of ICJ to unilaterally settle the present scenario created by India, which is beyond the jurisdiction of ICJ.”

Referring to the present situation created by India, Khawar said Pakistan can approach the UNSC for its intervention to compel India to refrain from its nefarious designs which may endanger war between two nuclear countries.

On the dispute of Kashmir, Shah Khawar said that government of Pakistan must take up this matter before OIC to mount pressure on India to behave and does not endanger the regional peace and observers human rights.

“Apart from this, the government of Pakistan must send special envoys to friendly countries and especially to the permanent members of UN Security Council for lobby against India,” Khawar said.

An official said that the team would frequently liaise with the prime minister about the steps Pakistan would take to tackle the Indian strike. He said Imran Khan was keen to see the recommendations of the team so that the actions were immediately taken on them.

He said the prime minister was constantly consulting the top military leadership and that is why the National Security Committee has held two meetings since the Indian decision.