North Korea stole $2b for weapons from cyberattacks - GulfToday

North Korea stole $2b for weapons from cyberattacks 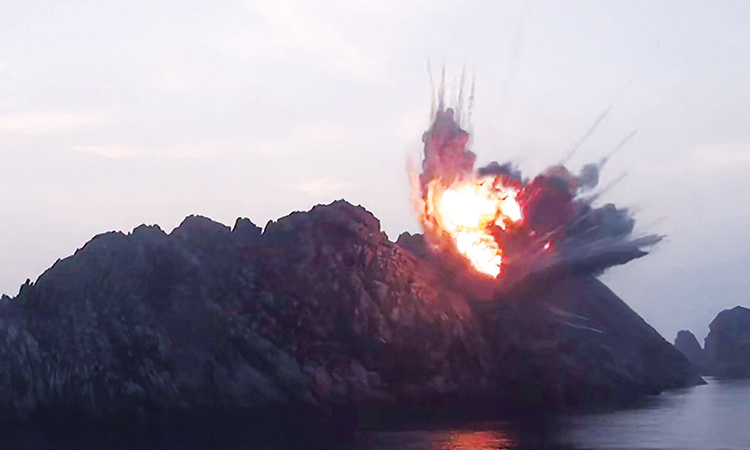 A new type tactical guided missile hitting a targeted islet in the East Sea of Korea during its demonstration fire. Agence France-Presse

North Korea has stolen up to $2 billion from banks and cryptocurrency exchanges through cyberattacks to fund its nuclear missiles program, according to a United Nations report seen by reporters on Wednesday.

“Large-scale attacks against cryptocurrency exchanges allow the DPRK to generate income in ways that are harder to trace and subject to less government insight and regulation than the traditional banking sector,” the report added.

North Korea has launched four pairs of projectiles in less than two weeks and threatened more, amid fears it is ramping up its missiles programme.

Leader Kim Jong Un says the country’s latest missile launches on Tuesday were a warning to Washington and Seoul over their joint war games, state news agency KCNA reported, as tensions rise on the Korean peninsula.

“Cyber actors, many operating under the direction of the Reconnaissance General Bureau (North Korea’s intelligence agency), raise money for its WMD (weapons of mass destruction) programmes, with total proceeds to date estimated at up to two billion US dollars,” said the UN report.

“These and other sanctions are facilitated through the DPRK’s access to the global financial system, through bank representatives and networks operating worldwide.

“The DPRK has also used cyberspace to launch increasingly sophisticated attacks to steal funds from financial institutions and cryptocurrency exchanges to facilitate income,” said the report.

The Security Council has imposed a number of sanctions on North Korea since the country conducted its first nuclear test in 2006.

Pyongyang and Washington are engaged in a long-running diplomatic process over the North’s nuclear and missile programs that has seen US President Donald Trump and Kim hold two historic summits.

The North made a vague pledge on denuclearization during the first meeting in June last year.

A second summit in Hanoi this February broke up amid disagreements over sanctions relief and what Pyongyang might be willing to give up in return.

The two agreed to resume nuclear talks during their impromptu June meeting in the Demilitarized Zone that divides the peninsula, but working-level dialogue has yet to begin.

President Donald Trump said on Wednesday discussions have begun with South Korea to get the country to pay more for the cost of maintaining U.S. troops in the region to guard against any threat from North Korea.

“Talks have begun to further increase payments to the United States. South Korea is a very wealthy nation that now feels an obligation to contribute to the military defense provided by the United States of America,” Trump wrote in a Twitter post.

The two countries agreed to discuss the defense cost sharing issue “in a reasonable and fair manner” when U.S. national security adviser John Bolton visited South Korea last month, the official said, adding that the details would be discussed at the next talks.

Trump has repeatedly said Seoul should bear more of the burden of keeping some 28,500 U.S. troops stationed in South Korea, where the United States has had a military presence since the 1950-53 Korean War.

South Korean and U.S. officials signed an agreement in February, under which Seoul would raise its contribution by about $70.3 million to just under 1.04 trillion won ($927 million). The interim agreement was due to expire in a year.