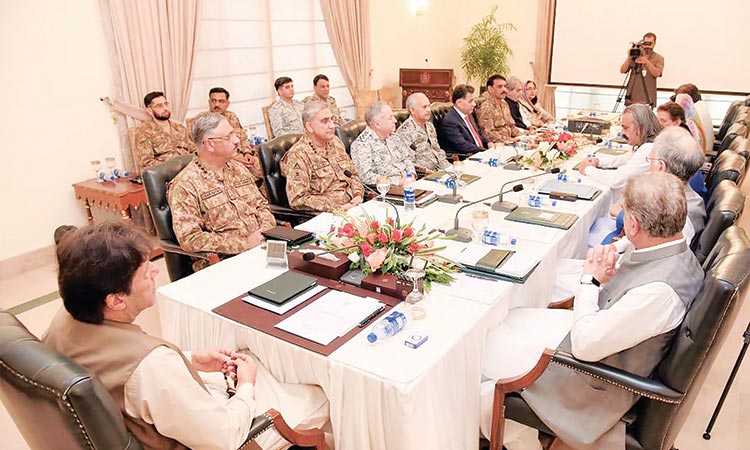 Pakistan’s parliament and top military commanders separately meet on Tuesday to ponder over the situation arising out of Indian decision revoking the special constitutional status of Occupied Jummu and Kashmir (J&K) through a presidential order.

With the special status repealed, people from the rest of India will now have the right to acquire property in J&K and settle there permanently.

President Dr Arif Alvi hurriedly summoned the joint session of the Senate and National Assembly after different political parties demanded the parliament’s session to deliberate upon the grave situation.

To discuss the military side of the emerging scenario, Chief of Army Staff General Qamar Javed Bajwa called the corps commanders’ conference which will be held at the General Headquarters in Rawalpindi.

Imran Khan is expected to make a policy statement in the parliament. “He will certainly reject the Indian decision of undoing the special status of the occupied Kashmir,” an official said.

Imran, who earlier in the day went about his official duties, including inaugurating a greening drive, without any official reaction, dialled the leaders of Malaysia and Turkey in the evening.

During his telephone talk with his Malaysian counterpart and later with Erdogan, Imran said that India’s announcement on the status of Jammu and Kashmir was in clear violation of the United Nations Security Council resolutions. The Malaysian premier expressed concern over the situation in Indian Jammu and Kashmir, according to a statement by the Foreign Office.

Erdogan assured Imran that Turkey, with regard to Kashmir, would continue supporting Pakistan, according to a statement.

Leader of the opposition in the National Assembly will take part in the debate apart from several other key parliamentary figures including Pakistan Peoples Party (PPP) Chairman Bilawal and Asif Ali Zardari from both sides of the divide. The ruling and opposition forces are unanimous on Pakistan’s stand vis-à-vis Indian specifically New Delhi government’s latest move. The parliament will pass a consensus resolution calling upon the United Nations and global community to come forward and stop India from violating international norms and values.