Pakistan Prime Minister Imran Khan on Monday termed India's move to revoke Article 370 as "illegal" and one which would "destroy regional peace and security."

The cricketer-turned-politician termed changing the status of Jammu and Kashmir as a "violation of UN resolutions."

On Sunday, Imran said that Pakistan will respond to any "misadventure or aggression" by Indian forces against it.

Chairing the National Security Committee meeting in Islamabad, Imran alleged that India has used "cluster bombs" on civilians along the Line of Control and called on the UN Security Council to take note of the "international threat to peace and security."

He said that Pakistan "will always stand with Kashmiris and will not be deterred from its just stance based on United Nations Security Council's resolutions and aspirations of Kashmiri people."

Imran's move comes in the wake of US President Donald Trump renewing his offer to mediate in the Kashmir issue, which India has firmly rejected.

The official Twitter handle of President Arif Alvi said: "India's attempt to further change status of Indian-occupied Jammu and Kashmir is against the resolutions of UNSC and against wishes of the Kashmiri people."

"Pakistan supports and insists on a peaceful resolution based on wishes of Kashmiri people and stands with them in their hour of need," he said in another tweet.

It said that "no unilateral step" by the Indian government can "change the disputed status" according to the United Nations Security Council (UNSC) resolutions.

"Nor will this ever be acceptable to the people of Jammu & Kashmir and Pakistan."

It said that as party to this international dispute, "Pakistan will exercise all possible options to counter the illegal steps."

"Pakistan reaffirms its abiding commitment to the Kashmir cause and its political, diplomatic and moral support to the people of Occupied Jammu and Kashmir for realisation of their inalienable right to self-determination," it said.

Foreign Minister Shah Mahmood Qureshi said that Islamabad will highlight its stand with the US and international community over the issue. 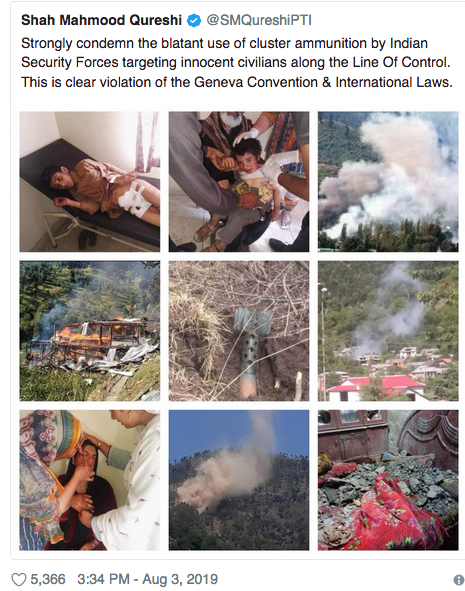 "Pakistan condemns and rejects announcements made today by the Indian government regarding Indian-occupied Jammu and Kashmir," he tweeted.

"We intend to firmly highlight our stance in our meetings with the US delegation visiting Pakistan and with the international community at large," he said.

Calling for an emergency meeting of the parliamentary leaders, Sharif said: "This is a matter of Pakistan's national interest and the entire nation is united on this front."