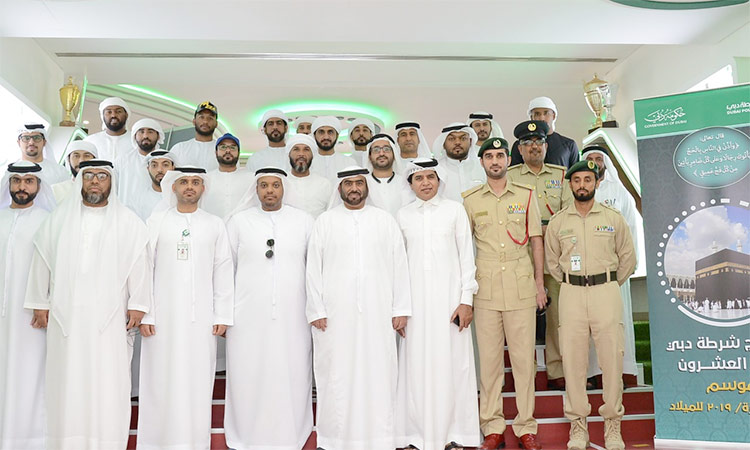 Some of the Dubai Police pilgrims stand together for a group picture.

With just a few days left before Hajj (Pilgrimage), Dubai Police pilgrims are getting ready to set off for the holiest of Muslim places, Makkah and Medina on a unique journey arranged and sponsored by the Dubai Police General HQ.

Acting upon the directives of Major General Muhammad Saeed Bakhit, Assistant Commandant for Community Happiness and Logistics, Butti bin Darwish Al Falasi, Director of Security Awareness at Dubai Police, met with 54 members of the force who have been chosen to perform this year’s Hajj.

Al Falasi reminded them—that one’s intention must be to perform Hajj solely for the sake of Allah. Considerations of pleasing or impressing others with the show of piety should never be a factor. All of the debts and financial obligations must be fully discharged before they start the holy journey and, where necessary, a written acknowledgement of the transaction must be obtained for future use.

He also added that one must make an honest effort to resolve his/her outstanding differences with others and seek forgiveness from those he/she may have hurt in any way in the past. This is based on specific instructions of Rasool Allah (PBUH) and must be followed for the Hajj to be meaningful.

Upon arrival in Makkah, pilgrims will perform all required rites of Hajj, before leaving for Medina and visit the final resting place of Prophet Muhammad (PBUH) and his companions.

Last Thursday, the last batch of Yemeni Haj pilgrims left for Saudi Arabia onboard an Emirati aircraft, under a grant by His Highness Sheikh Mohamed Bin Zayed Al Nahyan, Crown Prince of Abu Dhabi and Deputy Supreme Commander of the UAE Armed Forces.

This is the fourth year His Highness Sheikh Mohamed Bin Zayed’s pilgrimage grant is offered to families of the Yemeni martyrs.

The pilgrims expressed happiness on being able to undertake the Hajj pilgrimage and thanked and appreciated the support of the UAE’s leadership, government and people.

Meanwhile, recently Sheikh Shakboot Bin Nahyan Al Nahyan, the UAE Ambassador to Saudi Arabia, has lauded the Kingdom’s efforts in providing best services and facilities to pilgrims enabling them to perform their Hajj rituals with ease and tranquilly.

Running short of space in small hut, 7 workers in India quarantine themselves on a banyan tree