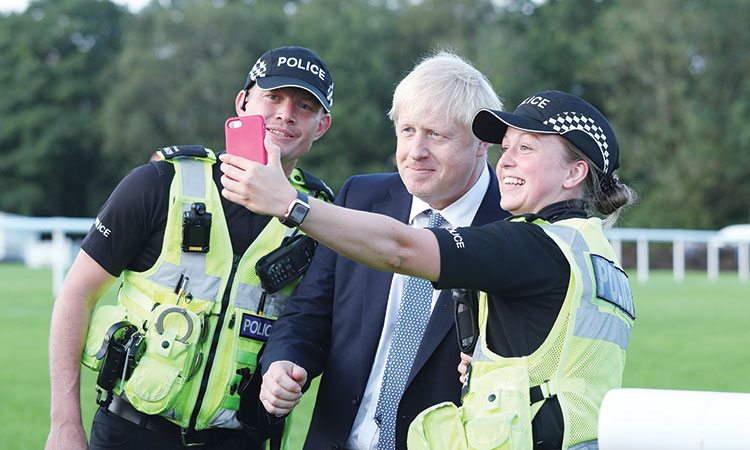 Johnson, a figurehead for the “Leave” campaign in the 2016 referendum, promoted the idea emblazoned on a bus that Britain could spend 350 million pounds a week on the National Health Service if it left the European Union.

Britain’s new prime minister is moving quickly to meet that and other Brexit pledges, a bid to restore some of the trust in politicians that has been eroded in the three years since the referendum that deeply divided the country.

But by ushering in a spending spree on health, education and policing after years of economic austerity, Johnson has fuelled expectations of an early election - something his team says will not happen before Britain leaves the EU on Oct. 31.

Writing in the Sunday Times newspaper, Johnson said he wanted to get more funding to the frontline of the NHS to try to stop the “the delays, the cancellations”.

“Which is why I am so determined to deliver now on the promises of that 2016 referendum campaign: not just to honour the will of the people, but to increase the cash available for this amazing national institution,” he wrote.

“It is thanks to this country’s strong economic performance that we are now able to announce 1.8 billion pounds more for the NHS to buy vital new kit and confirm new upgrades for 20 hospitals across the country.” A source confirmed the government was planning to bring forward a commitment made by his predecessor Theresa May to give the NHS an additional 20 billion pounds by 2023 to boost a service that is one of Britain’s most beloved institutions.

Johnson has said he is willing to funnel more money into public services, using the previous government’s so-called “fiscal headroom”, which had been earmarked to support the economy through a no deal.

But on Thursday, the Bank of England lowered its growth forecasts, showing a one-in-three chance that the economy would be shrinking in annual terms by the end of the first quarter of next year, even without a disruptive Brexit.

“We’re now in a place where the economy is performing significantly better, much better, and that enables us to do what all governments want to do which is to make sure the public services on which people rely are in good order,” he told Sky News.

But the main opposition Labour Party said the pledge for the NHS did not go far enough to rebuild a service.

“Our NHS is facing a backlog of 6 billion pounds worth of repairs, putting patients safety, patients lives at risk every day,” Labour’s health policy chief Jon Ashworth said, adding that the opposition party would put more money in.

Ashworth said he suspected the government was on an election footing for later this year, when Labour and even some Conservative lawmakers say they will do anything to try to stop Johnson from leading Britain out of the EU without a deal.

It is widely expected that Labour will bring a motion of no confidence in the government after parliament returns to work in September to try to stop a no deal, but Johnson’s top aide was reported as saying such a move would not work.

Dominic Cummings, one of the architects of the Leave campaign, was reported by the Sunday Telegraph as saying that Johnson could schedule a national election after the Oct. 31 deadline if he lost a vote of no confidence.

“(Lawmakers) don’t realise that if there is a no-confidence vote in September or October, we’ll call an election for after the 31st and leave anyway,” Cummings was quoted by one source as saying.

“There will be opportunities for us when parliament returns in September to stop no deal,” Ashworth told Sky News.

“The government will have to bring forward appropriate legislation to prepare for this Brexit no-deal exit that they want. And we will use all the means available to us in parliament... and we will work to stop no deal.”