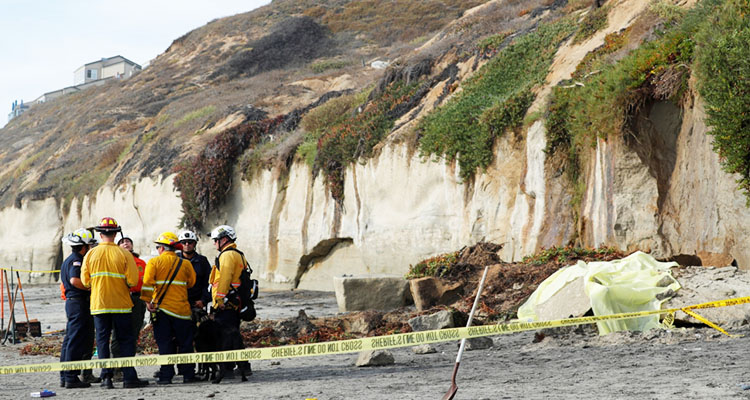 Emergency responders attend to a cliff collapse at a beach in Encinitas, California.

At least three people died when part of a cliff collapsed onto beachgoers on the California coast on Friday, authorities said.

The incident took place near a staircase leading to Grandview Surf Beach, north of San Diego.

The San Diego County Sheriff's Department said one person was killed and the City of Encinitas later tweeted that two of three people who were taken to hospital had also died.

"Beachgoers should continue to use caution when visiting beach areas," the City of Encinitas cautioned in the tweet.

At least two people had to be rescued from the debris after being trapped, said Lieutenant Ted Greenawald of the San Diego County Sheriff's Department.

Encinitas lifeguard captain Larry Giles told local reporters that rescuers were working with dogs to search for other possible victims.

The beach where the incident took place is located along sandstone cliffs that have rapidly eroded over the years.

In 2000, a landslide in the area killed a woman who was on a beach watching her husband surf.

The city of Encinitas has placed warning signs along several locations.

"Because of frequent bluff failures, a great deal of consideration has been given to ensuring the safety of those who visit our beaches," according to the city's website.

Visitors should "avoid standing or sitting directly underneath unstable bluffs, since they may collapse."