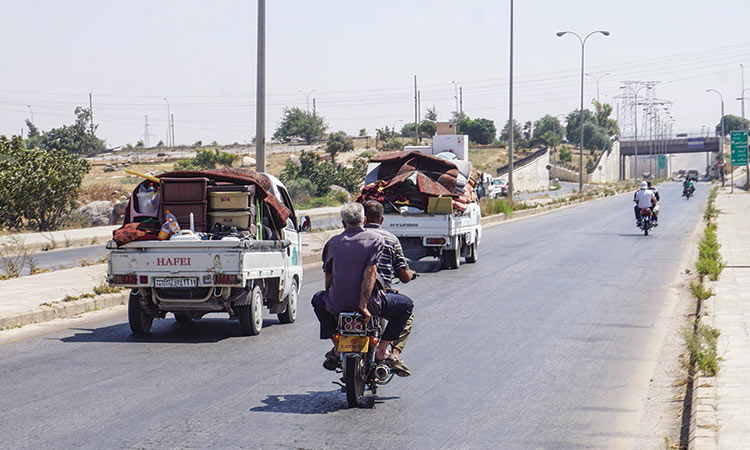 Syrians ride in trucks loaded with their belongings along the Bab Al Hawa highway near the city of Idlib on Saturday. Agence France-Presse

A munitions blast killed 31 regime and allied fighters at a military airport in central Syria on Saturday, a war monitor said.

The Syrian Observatory for Human Rights, which is based in Britain and relies on a network of sources on the ground, said it was unclear what had caused the deadly explosion at the Shayrat airbase in Homs province.

But state news agency SANA reported that a “technical fault during the transport of expired ammunition” had killed an unspecified number of victims.

The Shayrat airbase is one of the regime’s most significant installations in the centre of the country.

Iranian fighters — who support the regime in Syria’s ongoing civil war — are based there, according to the Observatory.

In 2017, US air strikes hit the base in response to a suspected sarin gas attack on the rebel-held town of Khan Sheikhun in northwest Syria that killed more than 80 people.

According to the Pentagon, US intelligence had established that the base was the launchpad for the alleged chemical attack.

Syria’s war has killed more than 370,00 people since starting in 2011 with the brutal repression of anti-government protests.

Air strikes on Syria’s northwestern Idlib region stopped on Friday after the government announced it had agreed to a truce following more than three months of deadly bombardment.

But militants dominating Idlib warned that regime violations would effectively “nullify” the ceasefire, which Damascus said will depend on rebel backer Turkey implementing a buffer zone in the area.

Most of Idlib province and parts of Hama, Aleppo and Latakia are controlled by Hayat Tahrir al-Sham, a extremist group led by Syria’s former Al-Qaeda affiliate.

The region is supposed to be protected from a massive government offensive by a Turkish-Russian deal struck in September in the Russian resort of Sochi.

But the deal has faltered and Syrian forces, along with Russia, have stepped up their bombardment there since the end of April, displacing 400,000 people according to the UN.

On Thursday, a new ceasefire went into effect as Syria peace talks resumed in Kazakhstan between Turkey and regime allies Russia and Iran.

“A cautious calm has reigned since just before midnight (2100 GMT),” Rami Abdel Rahman, head of the Britain-based Observatory for Human Rights told AFP on Friday.

He said that Syrian and Russia aircraft were no longer seen flying over Idlib following the truce welcomed by Moscow.

But regime forces and militants traded artillery fire in various parts of the region on Friday despite the deal, the Observatory said.

A civilian was killed and three others wounded in extremist rocket fire near Qardaha — the ancestral village of President Bashar Al Assad — in Latakia, state news agency SANA said.

Since late April, some 790 civilians have been killed by regime and Russian attacks, the Observatory says.

Fighting over the same period has claimed the lives of nearly two thousand combatants, including 900 regime loyalists, according to the monitor.

Syria’s representative at the peace talks in Kazakhstan on Friday said the success of the latest truce depends on the implementation of last year’s Turkish-Russian plan for a demilitarised buffer zone.

The September accord was never fully implemented as militants refused to withdraw from the area.

“The ceasefire agreement is conditioned on Turkey upholding the Astana and Sochi agreements,” Bashar Jaafari said during the second day of talks in the Kazakh capital, calling the new truce “a test of Turkey’s intentions”.

He called on the guarantors of the talks to assume “their responsibilities by putting pressure on Turkey” to fulfil the conditions of last year’s accord.

But he warned that Damascus would not be “waiting endlessly.” “Even though we are patient, this time our patience will be limited,” he said.

HTS, however, said the success of the ceasefire would depend on Damascus.

“Any bombardment or assault on the cities and towns of the liberated north, will nullify the ceasefire agreement,” it said in its first response to the truce.