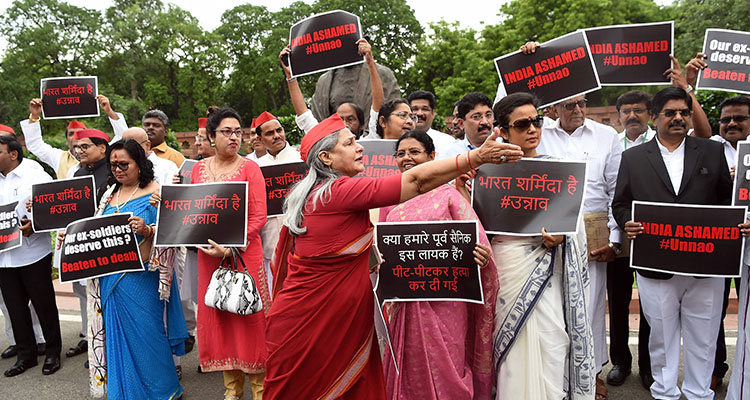 Jaya Bachchan gestures as she joins other parties during a protest calling for action in a rape case in Uttar Pradesh.

Two of the 19-year-old's aunts were killed and her lawyer was badly injured when a truck collided with their car in northern Uttar Pradesh state Sunday, raising suspicions of foul play.

The incident will be probed by federal investigators amid speculation that local police could favour her alleged rapist, Bharatiya Janata Party (BJP) legislator Kuldeep Singh Sengar.

Sengar, a four-term lawmaker, has been in jail since last year but reports say he still enjoys considerable clout.

The young woman and the lawyer were battling for their lives in hospital in the state capital Lucknow Tuesday. 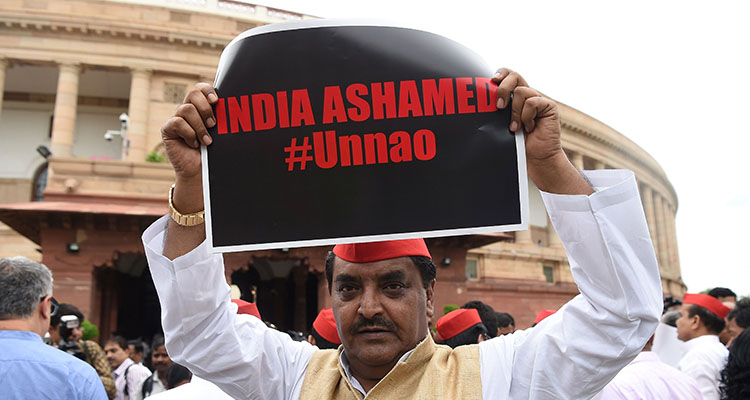 A member of the parliament of Samajwadi Party (SP) displays a placard during a protest.

The teenager had accused Sengar of raping her at his home in Unnao district in 2017 but police in the notoriously lawless state initially refused to take action.

Her father was detained by police and severely beaten in custody -- allegedly by Sengar's brother -- and later died from his injuries.

The woman also tried to set herself on fire outside the home of state Chief Minister Yogi Adityanath, a hardline BJP stalwart.

The teen's family members also staged a protest outside the Lucknow hospital, accusing Sengar of ordering the highway crash.

The demonstrations followed a rally late Monday, with supporters holding up banners with the words "you are not alone" in Hindi. More protests were planned in New Delhi and Lucknow later Tuesday.

"We demand justice for the survivor and her family which has been put through unspeakable horrors," activist Shehla Rashid said on Twitter.