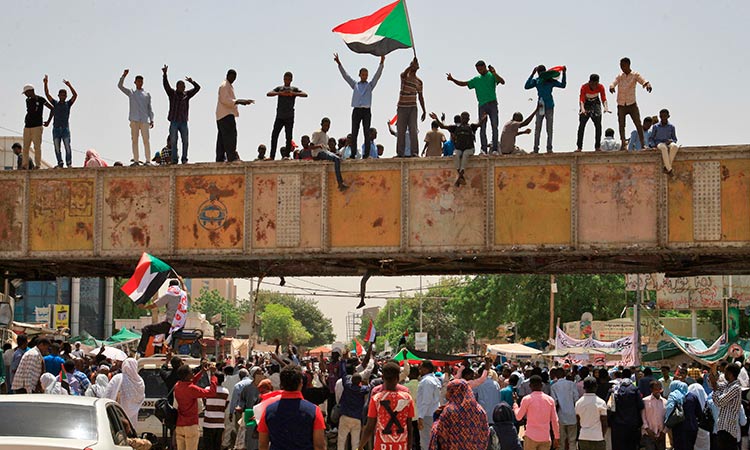 The authorities announced a night-time curfew in four towns following the deaths in the central town of Al Obeid.

"We cannot sit at the negotiating table with those allowing the killing of revolutionaries," Siddig Youssef, a prominent protest leader, said in a statement.

Protest leaders say Tuesday's talks will cover issues including the powers of the joint civilian-military ruling body, the deployment of security forces and immunity for generals over protest-related violence.

The generals and protest leaders have already inked a power-sharing deal that aims to set up a joint civilian-military ruling body which in turn would install civilian rule.

That is the main demand of a nationwide protest movement that led to the April ouster of longtime leader Omar al-Bashir and has since demanded that the military council which took his place cede power to civilians.

But on the eve of Tuesday's talks aimed at resolving the remaining issues over transferring power, five protesters including four students were killed in Al Obeid, the capital of North Kordofan state, a doctors committee linked to the protest movement said.

"Five martyrs succumbed to direct wounds from sniper bullets during a peaceful rally in Al Obeid," the committee said in a statement.

A key protest group, the Sudanese Professionals Association, said that "live ammunition" had been used against what it said was a student rally.

"We are calling on all citizens and medics to go to the emergency ward of Al-Obeid hospital and other hospitals that are receiving the wounded from the live ammunition fired on the rally of school students," the group said on its Facebook page.

The office of North Kordofan's governor said a curfew would be imposed indefinitely from 9:00 pm to 6:00 am in four towns including Al-Obeid starting on Monday, adding that all schools in the province had been told to suspend classes.

Residents of Al-Obeid said the rally was against a shortage of bread and fuel in the town.

"For the past few days there has been a shortage of fuel and bread," a resident told reporters by telephone.

"School children were affected as there is no transport to help them reach their schools. Today, they staged a rally and when it reached downtown there were shots fired." It was the tripling of bread prices that initially triggered protests against Bashir, which later turned into a nationwide movement.

The town of Al-Obeid had not witnessed any major rallies against Bashir even as provinces, cities and towns were swept by the campaign against his rule.