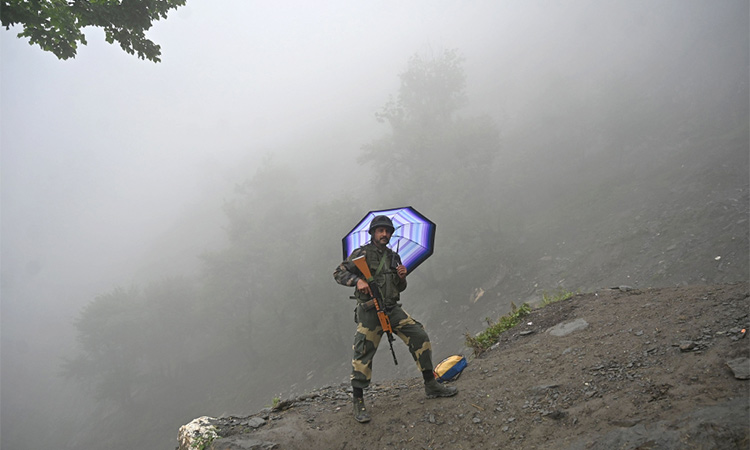 An Indian Border Security Force soldier stands guard during heavy rainfall at the PishuTop, southeast of Srinagar, on Sunday. AFP

Tensions in Indian-administered Kashmir rose on Sunday over the weekend deployment of at least 10,000 paramilitary troops to the troubled region despite authorities' assertions the move was routine.

India maintains a deployment of 500,000 soldiers in the Muslim-majority Himalayan region, which has been divided between the South Asian nation and Pakistan since their split in 1947.

The region has seen a resurgence of hostilities in recent years, while locals are fearful about the loss of special privileges after India's Supreme Court last year began hearing a case challenging a constitutional provision.

Officials said the movement of troops — set to rise to 20,000 — was to relieve exhausted personnel deployed since local civic polls last year and now monitoring an annual Hindu pilgrimage. 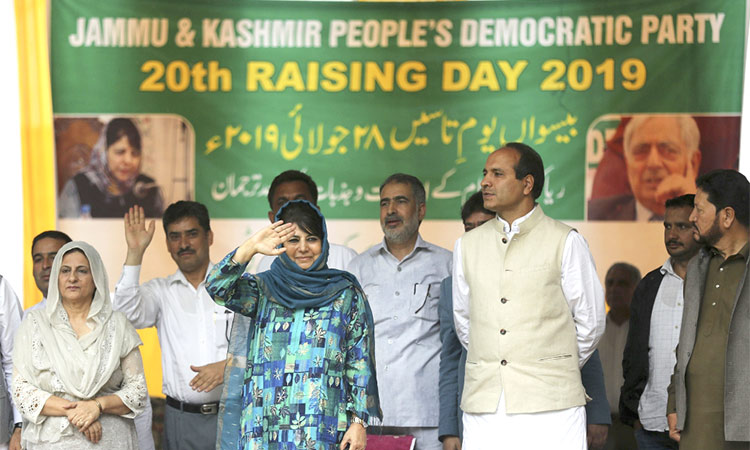 Jammu and Kashmir People's Democratic Party leader Mehbooba Mufti gestures towards her supporters during a rally in Srinagar. AFP

"Troops have been working constantly for seven months. Some have to go on leave and some for training outside," Director General of Police Dilbagh Singh told AFP.

A senior security official, speaking to AFP on condition of anonymity, said the deployment was to guard against possible protests about a decision or event, without giving further details.

He added that India's security set-up in Kashmir was "being re-oriented like never before."

Locals told AFP they were worried Indian Prime Minister Narendra Modi's government wanted to set aside a constitutional provision — Article 35A — which would allow Indians from outside the disputed territory to buy land there.

India has long insisted the issue can only be resolved bilaterally, and strenuously denied Trump's claims.

India and Pakistan have been fighting over Kashmir, a part of which is also controlled by China, for decades.