Thousands protest in Colombia against killings of activists - GulfToday 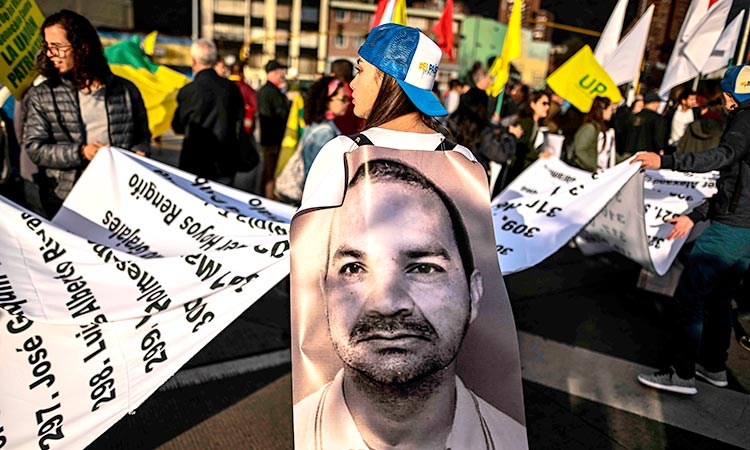 People take part in a demo against the murder of social leaders in Bogota, Colombia, on Friday. Juan Barreto/AFP

Thousands rallied across Colombia Friday to protest the killing of hundreds of human rights activists since the signing of a historic peace deal with FARC guerrillas.

"They are killing us but seeds of life and dignity are being born," Luis Acosta said as he walked toward Bolivar square in the capital Bogota, which was packed with protesters.

Colombian president Ivan Duque joined a rally in the port city of Cartagena but was jeered by parts of the crowd, videos posted on social networks showed.

"Today we are united in a fight against violence and drug trafficking, which has fueled the organized armed groups that have attacked social leaders in the country," Duque said earlier.

The rallies were called after the killing of activist Maria del Pilar Hurtado last month, in northern Colombia. A video of her son crying next to her body was widely shared in the country.

Some protesters carried banners of FARC, the former guerilla group, who signed a 2016 peace deal with authorities that ended half a century of armed conflict and established them as a left-wing political party.

The group has criticized the lack of security guarantees for its members after the signing of the pact and said 140 ex-guerrillas and 31 relatives have since been killed.