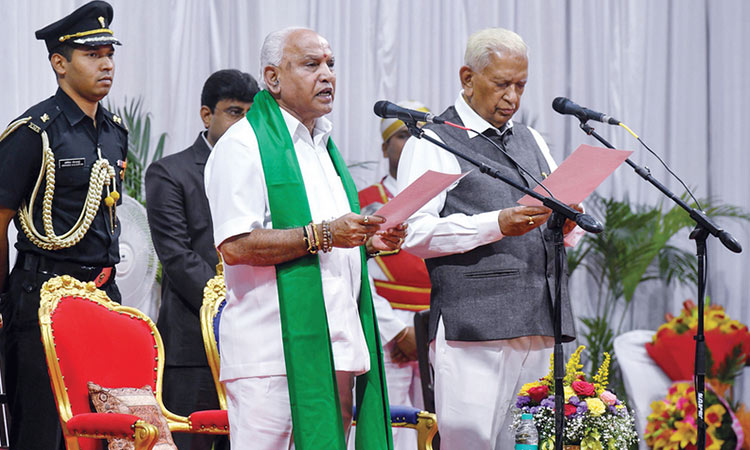 BS Yediyurappa speaks as Governor of Karnataka Vaju Bhai Valla looks on during the swearing in ceremony in Bengaluru. Agence France-Presse

BJP leader BS Yediyurappa was on Friday sworn-in as the Karnataka Chief Minister. Yediyurappa, who had earlier on Friday staked his claim — three days after the HD Kumaraswamy-led JD-S-Congress government fell —was administered the oath by Governor Vajubhai Vala at the Raj Bhavan in a ceremony boycotted by the Opposition.

No other minister was sworn-in with him.

The 75-year-old leader from the politically dominant Lingayat community becomes Chief Minister for the fourth time. The BJP’s first Chief Minister in south India, he headed the stae first in November 2007 for a week after the Janata Dal-Secular (JD-S) withdraw support to his party, from May 2008 to July 2011 and for three days in May 2018.

Yediyurappa said that he will prove his majority in the state Assembly on Monday.

“At the cabinet meeting held soon after I took oath as Chief Minister, I decided to go for floor test in the Assembly on Monday at 10 am, to prove majority,” Yediyurappa said at a crowded press conference in the state secretariat.

Relations between political leaders touched a new low in Karnataka, with the Congress and Janata Dal-Secular (JD-S) deciding to boycott the swearing-in of Yediyurappa as the state’s chief minister on Friday evening.

“Our party’s state President Dinesh Gundu Rao has directed our leaders, former ministers and legislators to boycott Yediyurappa’s oath-taking ceremony as chief minister, as he has no moral right to assume power when his party does not have the majority in the Assembly,” Congress spokesman Ravi Gowda told reporters.

Earlier in the day, Governor Vajubhai Vala invited Yediyurappa to take oath as chief minister at the Raj Bhavan at 6 p.m. and after the latter staked claim to form the BJP government in the state.

“I refuse to participate in this unholy event and instruct all #INCKarnataka leaders not to participate either,” party’s state president Dinesh Gundu Rao tweeted.

Noting that the swearing-in of Yediyurappa as chief minister was unethical and unconstitutional, based on horse trading and corrupt methods, Rao said the BJP forming the next government in the state was a blot on democracy.

“Though Yeddyurappa has sent an invitation for the ceremony to Kumaraswamy and our other party leaders, many have decided to stay away for various reasons,” JD-S spokesman Ramesh Babu told IANS.

Earlier Babu tweeted in Kannada: “The #HorseTradingParty of India has staked claim to form government even though it doesn’t have the magic number of 112.” Saying Friday marked one of the darkest days in the history of Karnataka, he tweeted: “Democracy is dying a slow death because of BJP’s unconstitutional practices.” He further added, “#HorseTraderYeddyurappa”.

The Congress also slammed Yediyurappa tweeting that “he has used his excellent horse-trading skills to subvert democracy and come to power. History is set to repeat again”.

Karnataka Congress Legislative Party (CLP) leader Siddaramaiah said: “Assembly has become an experimental lab for the BJP − that doesn’t have majority − and its Governor to try unconstitutional ways to form government.” The JD-S also tweeted: “How did the state Governor allow in a minute to administer oath of office to Yediyurappa when his party (BJP) has only 105 legislators in the 222-member Assembly, with 112 as halfway mark for simple majority after 3 rebel Congress MLA were disqualified by the Speaker (K.R. Ramesh Kumar) on Thursday?” Senior JD-S leader and former minster Basavaraj Horatti said Yediyurappa had no patience and his government’s collapse was imminent. “The new BJP government will not last long. The rebel legislators who ditched the Congress and the JD-S are untrustworthy,” Horatti told reporters at Hubballi.

Horatti, who was the chairman of the state Legislative Council for a few months after the coalition government was formed in May 23, 2018, claimed that while the secular allies JD-S and Congress had trouble shooters, the BJP had trouble makers. “It will have tough time in controlling the rebels,” he added.

BJP working President JP Nadda on Friday took a dig at Congress-JD(S) coalition in Karnataka, saying its government fell under its own weight.