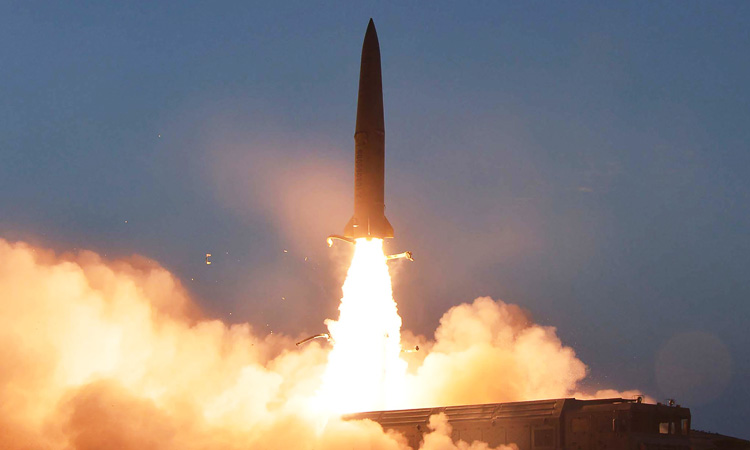 A new-type of tactical guided short-range missile being launched in North Korea on Thursday. KCNA/ AFP

North Korean leader Kim Jong Un has said two missiles fired under his supervision were newly designed tactical weapons that sent a “solemn warning” to the South over plans to hold military drills with the United States.

That working-level dialogue has yet to begin and, even before Thursday’s launches, Pyongyang had warned the talks could be derailed by Washington and Seoul’s refusal to scrap joint military exercises scheduled for next month. 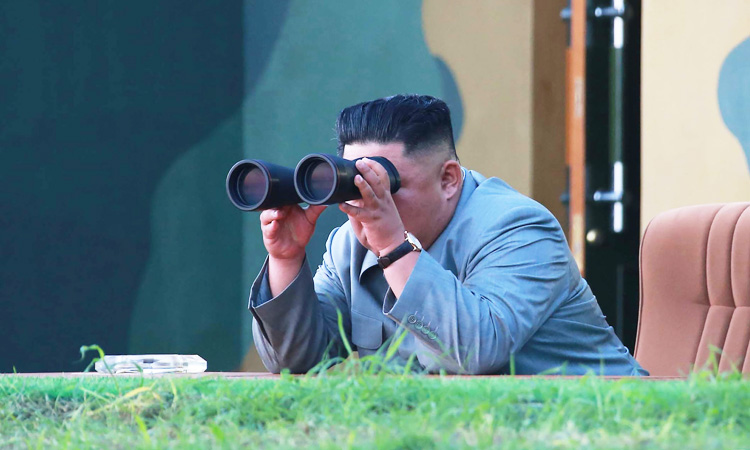 Kim Jong Un watching through binoculars as a new-type of short-range missile is launched on Thursday. KCNA/ AFP

North Korean state media provided no technical specifications, but said on Friday the latest tests were of a “new-type tactical guided weapon” that sent a “solemn warning to the South Korean warmongers” over their insistence on holding the joint drills “in defiance of repeated warnings.”

There are close to 30,000 US troops stationed in South Korea and their annual manoeuvres with South Korean soldiers have always infuriated Pyongyang.

"We cannot but develop nonstop super-powerful weapon systems to remove the potential and direct threats to the security of our country that exist in the south.

South Korean military monitors said the two short-range missiles fired on Thursday flew nearly 450 kilometres and 700 kilometres respectively, before splashing down in the sea between the Korean peninsula and Japan.

That range would allow them to hit any target in South Korea. 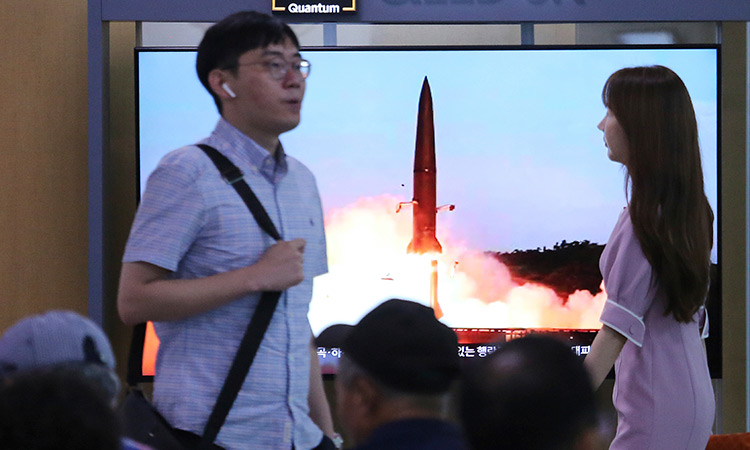 Japan’s defence minister called the launches “extremely regrettable” while Seoul’s National Security Office expressed “strong concern” and the US called for an end to such “provocations.”

According to state-run KCNA, Kim said the new “state-of-the-art” missiles were capable of low-altitude flight that made them difficult to intercept and cautioned Seoul against “ignoring the warning” implicit in their development.

"We cannot but develop nonstop super-powerful weapon systems to remove the potential and direct threats to the security of our country that exist in the south," Kim said, according to state news agency KCNA.

US Secretary of State Mike Pompeo said he believed the working-level talks would still go ahead, and that the latest tests were a negotiating tactic.

“Everybody tries to get ready for negotiations and create leverage and create risk for the other side,” Pompeo said in an interview with Bloomberg Television.

“We remain convinced that there’s a diplomatic way forward, a negotiated solution to this,” he said, adding he was unconcerned at the delay in getting back to the table.

“If it takes another two weeks or four weeks, so be it,” he said.

Pyongyang carried out similar short-range launches in May, which Trump dismissed at the time as “very standard stuff” - an assessment he repeated after the latest tests on Thursday.

“They really haven’t tested missiles other than smaller ones, which is something that lots test,” the president said in an interview with Fox News.