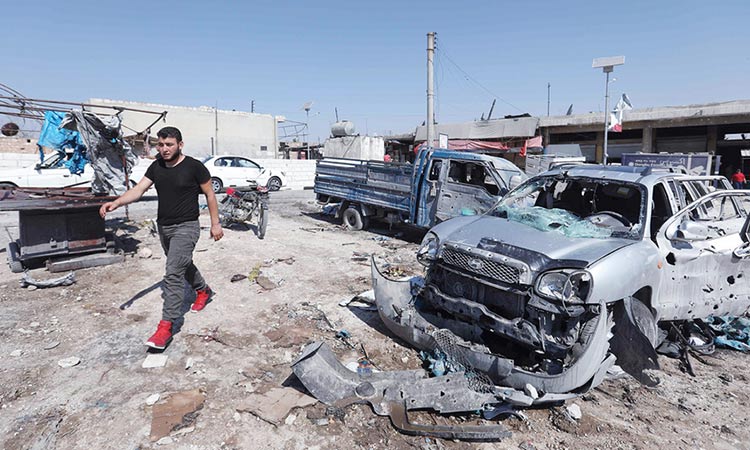 A man walks past damaged cars following a reported air strike on a market in Saraqeb on Friday. Agence France-Presse

The militant-dominated Idlib region is supposed to be protected by a months-old international truce deal, but has faced growing bombardment by the government and its ally Russia since late April.

The spike in violence has killed more than 740 civilians, according to the Syrian Observatory for Human Rights.

Aid groups have described the latest bloody episode of Syria’s eight-year civil war as a “nightmare.”

More than 400,000 people have fled violence in the area since the end of April, said David Swanson of the United Nations’ humanitarian coordination office OCHA.

He spoke to reporters as regime air raids pummelled a market in the Idlib province town of Saraqib, the second attack on the same market this week, according to the Observatory.

The Britain-based monitor said one civilian was killed and several others were wounded there on Friday, four days after a similar attack killed more than seven.

It said two other civilians were killed and 20 others were wounded in regime attacks elsewhere in the region.

“The Al Hal market is one of the main commercial hubs of the town,” Layth Al Abdullah, a rescue worker in the town, told media.

He said the regime had shown “barbarity... in its killing of civilians and the destruction of their property.”

Bachelet warned of continued regime attacks against schools, hospitals, markets and bakeries in the Idlib region.

“These are civilian objects, and it seems highly unlikely, given the persistent pattern of such attacks, that they are all being hit by accident,” she said in a statement.

“Intentional attacks against civilians are war crimes, and those who have ordered them or carried them out are criminally responsible for their actions.”

The region under attack is home to some three million people, nearly half of them already displaced from other parts of the country.

It covers nearly all of Idlib and parts of neighbouring Aleppo, Hama, and Latakia provinces.

Most of the displacement is from southern Idlib and northern Hama, the two areas that have been hit hardest by the flare-up, OCHA said.

“The majority of those fleeing have displaced within Idlib governorate while a smaller number have moved into northern Aleppo governorate.

“Roughly two-thirds of people displaced are staying outside camps,” it said.

Many are forced to live in the open air because of overcrowding in camps and reception centres, it added.

The Idlib region is controlled by militant alliance Hayat Tahrir Al Sham, led by Al Qaeda’s former Syria affiliate. A September accord struck between Moscow and Ankara was supposed to spare the region the bloodshed of a government assault, but it was never fully implemented as militants refused to withdraw from a planned buffer zone.

Instead, pro-government forces have since increased the intensity of their bombardment in recent weeks.

Air strikes by the government and its Russian ally killed 12 civilians in the region on Thursday, according to the Observatory.

Another 50 civilians were killed in strikes on Monday alone — the majority on a busy market, the monitor said.

OCHA described on Monday as one of the “deadliest days” in the region since the start of the flare-up.

It said that since the end of April it had documented 39 attacks against health facilities or medical workers in the region.

At least 50 schools have been damaged by the air strikes and shelling, it added. 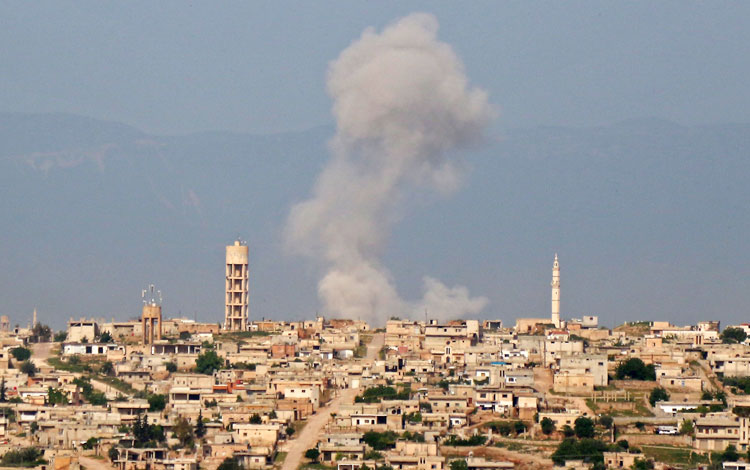