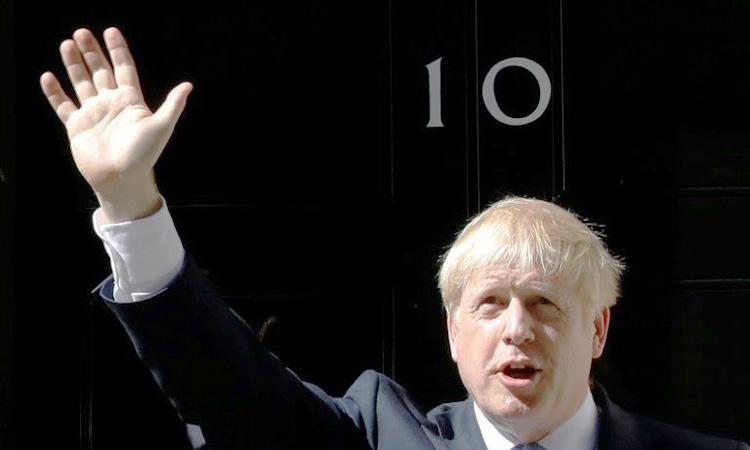 Boris Johnson took office on Wednesday and swept out more than half the ministers who served Theresa May in the difficult closing months of her premiership. Tolga Akmen/ AFP

He installed other loyalists in place of cabinet members who backed May’s efforts to ram through an unpopular European divorce deal.

Johnson delivered a characteristically optimistic speech Wednesday in which he vowed to steer Britain “out of the EU on Oct.31 — no ifs or buts.”

It is a big promise that threatens to backfire and spell a premature end to Johnson’s lifelong dream if he fails to deliver.

Johnson argues that his threat of a chaotic “no-deal” divorce will force EU leaders to relent and give Britain better terms that would let it pursue trade deals with powers like China and the United States.

Brexit backers in parliament had accused May of ignoring voters’ wishes by promising to keep the UK closely tied to EU economic rules if necessary to preserve a free-flowing border between EU member Ireland and Britain’s Northern Ireland.

Johnson’s solution for the frontier revolves around proposals that have been repeatedly rejected as either unworkable or insufficient by both EU and Irish leaders.

“I look forward to meeting you to discuss — in detail — our cooperation,” European Council president Donald Tusk told Johnson in a brief congratulatory note.

Irish Prime Minister Leo Varadkar — his heavily trade-dependent nation standing to lose most from a messy EU-UK split — was even more blunt.

“Any suggestion that there can be a whole new deal and negotiated in weeks or months is totally not in the real world,” he said.

Johnson will have the backing of his party but not the nation in his first days on the job.

He beat the now-former foreign secretary Jeremy Hunt by a two-to-one margin in a vote held by fewer than 160,000 paying members of the ruling Conservatives.

But a YouGov survey on Wednesday found his approval rating in Britain as a whole at just 31 per cent.

Opposition Labour leader Jeremy Corbyn challenged Johnson to call an election that could offer him the mandate of the nation as a whole.

Johnson has signalled his preference not to hold one before he can deliver Brexit.

Even his biggest critics in London and Brussels have been willing to give Johnson a chance to try his own luck at resolving the Brexit mess.

But his problems further abroad are more immediate — and just as challenging.

Iran’s seizure last Friday of a British-flagged tanker in the Gulf thrusts Johnson in the middle of the Islamic republic’s escalating standoff with US President Donald Trump.

And Trump’s bid to contain China’s global clout has forced Britain into an uncomfortable choice over what technology to use in its now-delayed rollout of the next-generation 5G data network.

Johnson boasts a friendship with Trump that his doubters fear will make Britain beholden to the mercurial White House chief’s unpredictable foreign policies.

His supporters, however, say good relations with Trump will help the prospects of an early trade deal with the US after Brexit.