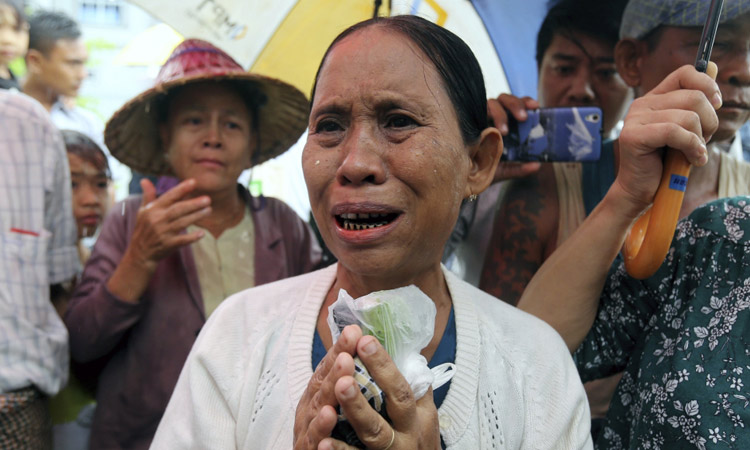 Daw Yee talks to journalists after the trial of her girl at a court in Nyapyitaw, Myanmar, on Wednesday. AP

The mother of a toddler raped at her nursery school in Myanmar told a court on Wednesday that she believes the man charged with the crime is not the perpetrator.

The mother of the girl, who was 2 years, 11 months old when she was allegedly raped in May, said at the Dakkhina Thiri District Court that when her daughter watched security video from the school, she identified two other individuals as the ones who assaulted her.

The case has triggered protests, including at Wednesday's hearing, not only because of the nature of the crime but also because of the widespread belief that the suspect who has been charged, Aung Kyaw Myo, is a scapegoat.

Sceptics believe the real attackers are two boys related to influential people in Myanmar's capital, Naypyitaw, where the school is located.

The victim's mother was the only person to give testimony on Wednesday as the court carried out pre-trial hearings.

She urged the court to treat one of the school's teachers as a suspect, not just an important witness. The mother claimed that the teacher, Hnin Nu, had given inconsistent and possibly misleading accounts of what had happened.

The mother said that her daughter had not only told her that the teacher knew what happened, but had also even scolded one of the boys involved.

The parents of the 29-year-old suspect, also known as Aung Gyi, attended Wednesday's proceedings and spoke to reporters outside the courtroom.

The mother, Daw Yee, said the incident occurred on her son's first day on the job as a driver for the school.

"I have a lot of hope," she said, adding that she and her husband felt sure their son was not guilty. "We believe that he will be free."

The pre-trial hearings were set to continue on Aug.1.