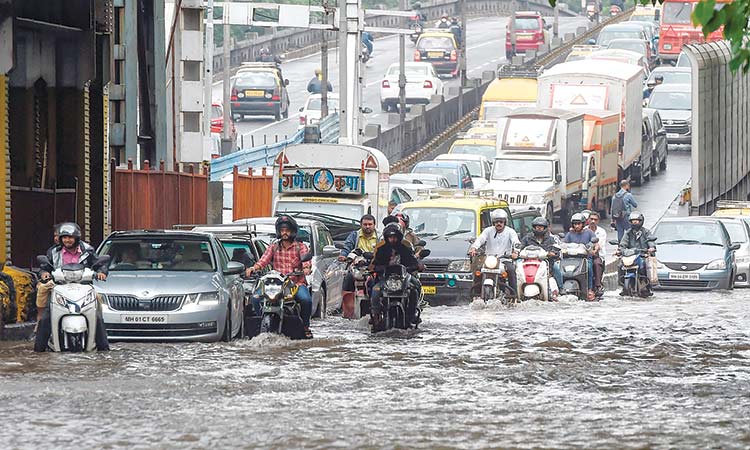 Commuters drive on a flooded road after heavy rain in Mumbai on Wednesday. Agence Fracne-Presse

“The state government has ordered ex-gratia payment of Rs400,000 each to the kin of those who lost their lives,” said an official of the Disaster Management Department.

Meanwhile, after a week’s lull, Monsoon revived with full force in Mumbai, coastal Konkan and other parts of Maharashtra, disrupting normal life, here on Wednesday.

Heavy rain continued to lash Mumbai since 1am and the city woke up to water-logging in many low-lying areas, flooded railway tracks and huge traffic snarls.

The flood situation in Bihar remained grim on Wednesday and is expected to worsen as neighbouring Nepal is witnessing heavy rainfall and the water from the overflowing rivers there may flow in to Bihar, an official said.

So far, 106 people have died while over eight million have been affected by the floods in Bihar.

Thousands have been displaced across the state’s 12 districts as rivers are flowing above the danger mark at several places, officials said.

An official from the Water Resources Department said that heavy rainfall in Nepal since Monday is bound to worsen the situation in Bihar.

Latest reports suggest that the water level in major rivers is continuing to rise and embankments have been breached at several places. Water is also spreading to new areas, forcing people to take shelter at safer places, officials said.

Bihar Water Resources Minister Sanjay Jha told the media that embankments were breached at several places due to heavy rainfall. “We are working to repair embankments,” he said.

Jha said the government is doing everything possible to help the flood victims.

According to Wednesday’s report on the website of the Disaster Management Department, more than eight million people living in 1,238 panchayats in 12 districts have been affected by the floods that were caused by heavy rain in north Bihar and the catchment areas of major rivers in neighbouring Nepal.