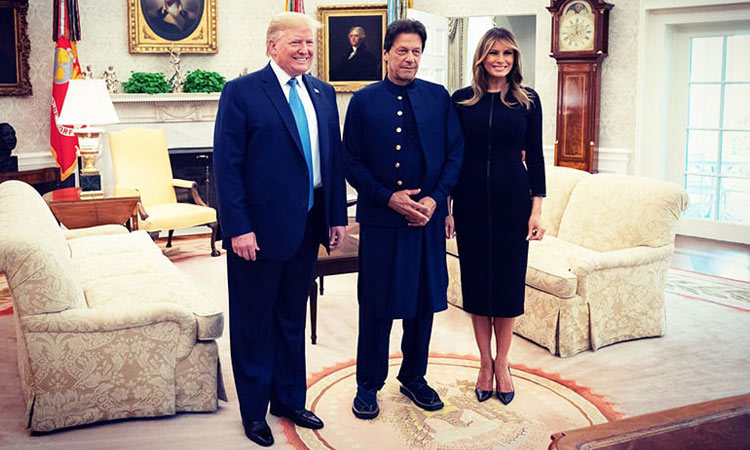 Prime Minister Imran Khan has thanked US President Donald Trump for hosting him at the White House with "gracious hospitality" and assured him that Pakistan "will do everything within its power" to facilitate the process aimed at ending Afghanistan's nearly 18-year war.

Imran said he would meet with the Taliban after returning to his country, as part of efforts to end 18 years of war in Afghanistan.

He said he had also spoken with Afghan President Ashraf Ghani, and now, when he goes back, "I will meet the Taliban and I will try my best to get them to talk to the Afghan government."

"I want to assure President Trump Pakistan will do everything within its power to facilitate the Afghan peace process," he wrote, adding that the world owed it to the people of Afghanistan to bring about peace after four decades of conflict. 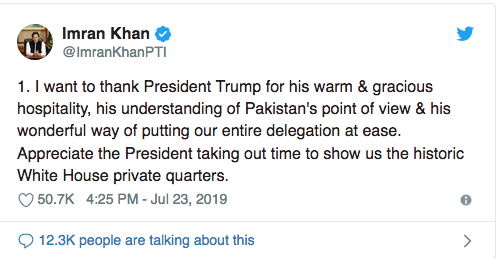 Imran also said he was "surprised" by the reaction given by India to Trump's offer to mediate between Pakistan and India to enable dialogue for resolving the Kashmir conflict.

"Generations of Kashmiris have suffered & are suffering daily and need conflict resolution," the prime minister stressed, noting that the Kashmir dispute has held the subcontinent hostage for 70 years. 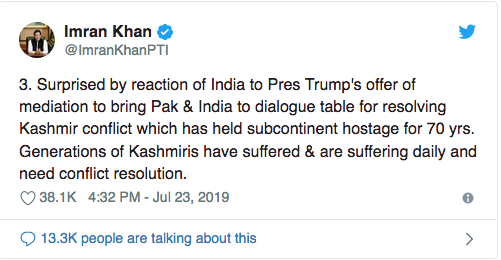 His comment came hours after India's foreign ministry denied Trump had been asked by Indian Prime Minister Narendra Modi to mediate the Kashmir conflict with Pakistan.

“We have seen President Trump's remarks to the press that he is ready to mediate, if requested by India and Pakistan, on the Kashmir issue. No such request has been made by Prime Minister Modi to the US President,” said Raveesh Kumar, official spokesman of India's Ministry of External Affairs.

"It has been India's consistent position that all outstanding issues with Pakistan are discussed only bilaterally."

While speaking to the press alongside Trump at the White House, Imran had said that the US, being "the most powerful" country in the world, could play the most important role in bringing peace to the subcontinent. In response, Trump said that India had also asked him to mediate.

"I was with Prime Minister [Narendra] Modi two weeks ago. We talked about the subject and he actually said, 'Would you like to be a mediator or arbitrator?'. I said where, he said Kashmir, because it has been going on for many, many years. I was surprised to know how long it has been going on. I think they would like to see it resolved, you [Pakistan] would like to see it resolved and if I can help, I would love to become a mediator," said Trump.

In a separate tweet, Imran thanked the Pakistani-American community "for showing up in such large numbers" at the Capital One Arena in Washington DC to welcome him on his maiden visit to the US after assuming office. 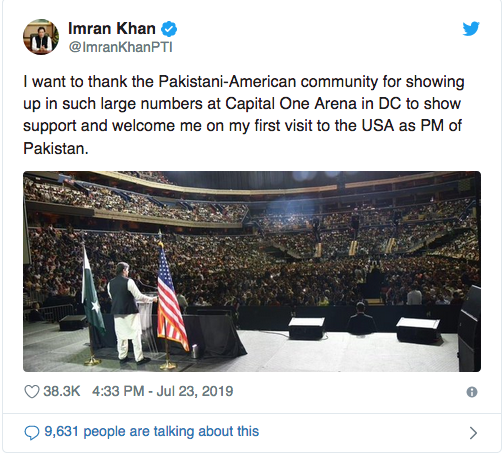 Speaking at the US Institute for Peace, a bipartisan federal body, Imran said he had been contacted by the Afghan Taliban "a few months back," after his election win in July 2018, but did not take a meeting at that time because Kabul was not in favour of it.

The militants reached out to him "because I always maintained there was no military solution" to the war in Afghanistan, he said.

"So because of that, I had a certain amount of credibility amongst them," added Imran.

Imran earlier on Tuesday met US Secretary of State Mike Pompeo, who emphasised the importance of working together and "Pakistan's significant role in supporting the Afghan peace process and counterterrorism," according to a US statement.