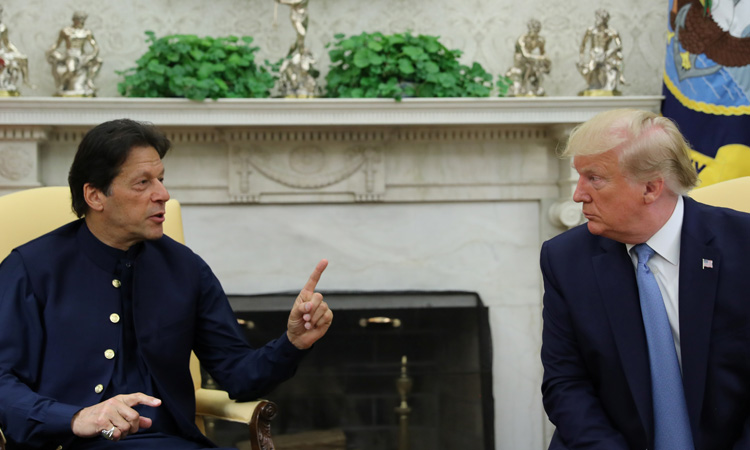 Imran Khan meets Donald Trump in the Oval Office of the White House in Washington, on Monday. Reuters

Addressing a press conference, Qureshi said that matters pertaining to Trump’s visit will be agreed upon soon.

His comments followed Imran’s meeting with Trump at the White House on Monday. Qureshi said that previously Pakistan-US ties took a cold turn but now they have improved and the government is serious to re-establish better ties.

Imran on Tuesday said he would try on his return home from a US visit to persuade the Taliban to meet with the Afghan government.

“I will meet the Taliban and I will try my best to get them to talk to the Afghan government,” Imran said during an appearance at the US Institute of Peace.

The Taliban have refused to hold direct negotiations on a peace settlement with the government of Afghan President Ashraf Ghani, which they view as a puppet of the United States.

Earlier, Imran said that Pakistan’s main spy agency provided the US with a lead that helped them find and kill Al Qaeda leader Osama Bin Laden.

Pakistan has until now officially denied having any knowledge of the terror chief until he was shot dead in a night time raid by US special forces on May 2, 2011, an incident that was a major national embarrassment and caused ties between the two countries to plummet.

Imran made his claim in an interview with Fox News when he was asked whether his country would release a jailed doctor whose fake immunisation drive helped the US track and kill Bin Laden in 2011.

“This is a very emotive issue, because Shakeel Afridi in Pakistan is considered a spy,” he told host Bret Baier, referring to the doctor.

“We in Pakistan always felt that we were an ally of the US and if we had been given the information about Osama Bin Laden, we should have taken him out.”

Baier then asked if Imran understood the scepticism around the Inter Services Intelligence agency (ISI) for leaking key information, to which Imran replied:

“And yet it was ISI that gave the information which led to the location of Osama Bin Laden.

“If you ask CIA it was ISI which gave the initial location through the phone connection.”

It was not immediately clear what Imran was referring to and he did not provide more detail.

Though Pakistan officially denies knowing that Bin Laden was living on its territory, Asad Durrani, a former spymaster, told Al Jazeera in 2015 that the ISI probably knew where he was hiding and hoped to use him as a bargaining chip before he was killed.

Imran Khan, in the interview with Fox News, also talked about prisoner swap of Afridi and Dr Aafia Siddiqui with the US.

“You are a prime minster, you can make a decision can’t you,” he was asked. “There are some decisions in a democracy that even a prime minister finds difficult to make, because we do have an opposition,” Imran responded. But this is something that can be negotiated. We also have someone in US prison, a frail woman called Siddqui and we could negotiate a swap. The talks have not started yet, we know that US wants Shakil Afridi and we could negotiate.”

Meanwhile, President Trump presented a cricket bat to Imran along with a picture of President Eisenhower. He also hailed Imran as a “great athlete, very popular Prime Minister of Pakistan.”

The prime minister told Fox News that he found Trump refreshing and someone who is straightforward, no juggling of words. He said Pakistan and the United States were important allies in the war on terror and both the countries suffered loss due to mistrust in the past.

On question of nuclear war, Imran said nuclear war is not an option and India must abandon its nuclear weapons. “If India complies with this demand Pakistan will also not use nuclear weapons. Pakistan has a comprehensive and effective nuclear command and control system. The armed forces of Pakistan are professional forces and are fully capable of dealing with every challenge.’