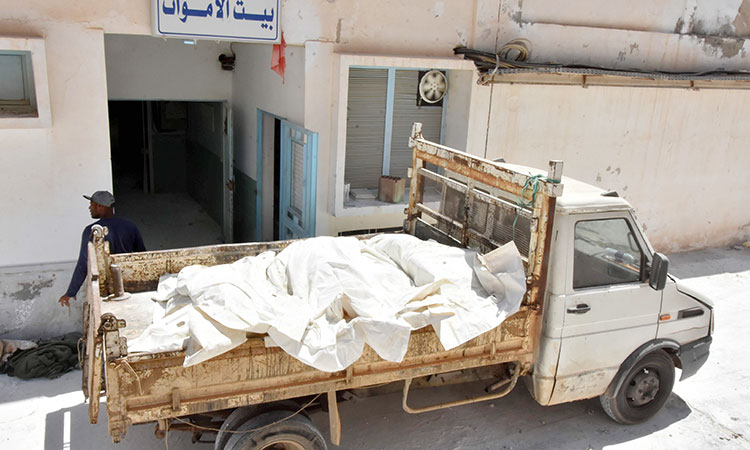 Forensic workers load into a truck the bodies of migrants in El Ketif, Gabes. Agence France-Presse

A putrid odour lingers outside a morgue in Tunisia’s coastal city of Gabes as dozens of bodies of would-be migrants to Europe pulled out of the sea await burial.

A string of deadly shipwrecks since May have left the North African country overwhelmed with bodies and struggling to find them a final resting place.

More than 80 drowned migrants have been retrieved from Tunisian waters -- most of them victims of a deadly July 1 shipwreck that left only three survivors.

Fished out of the sea between the port city of Zarzis and the tourist island of Djerba in the south, their bodies were brought to Gabes hospital -- the only facility in the region capable of taking DNA samples.

The samples could well be the only hope of informing the victims’ families of their fate, he added.

In the basement morgue, staff use surgical masks or simple scarves to fend off the stench of bodies stacked one top of the other on the floor.

Since July 6, the numbers have “overwhelmed” the morgue’s 30-body capacity, said Lakhrech.

With just two forensic doctors and two assistants, not to mention a lack of equipment, the facility is struggling to keep them properly stored, he added.

After forensic tests, the bodies are kept at the morgue until a burial site is found, which in Tunisia is complicated, according to Gabes governor Mongi Thameur.

Many municipalities have refused to allow the drowned migrants to be buried in their cemeteries.

“Some fear the bodies carry cholera, and others refuse to bury people in Muslim cemeteries if their religion is unknown,” he told AFP.

It comes down to “a problem of mentality and also of humanity in some cases”, he said, adding that many people needed to be “sensitised”.

At the Bouchama cemetery, the only one in Gabes to have so far accepted migrant bodies, 16 graves dug off to the side lie empty.

“My parents are resting here, I don’t want non-Muslims to be buried by their side,” said one local resident.

At least 20 die as migrant boat sinks off Tunisia

The coastline near the Tunisian port city of Sfax has become a major departure point for people fleeing conflict and poverty in Africa and the Middle East and searching for a better life in Europe.