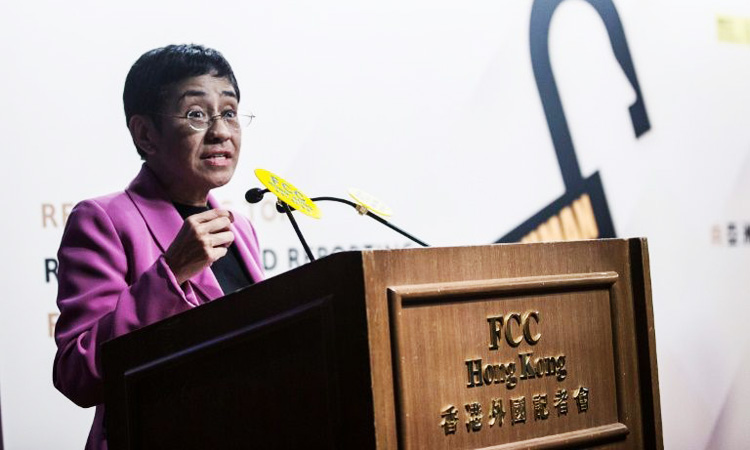 High-profile Philippine journalist Maria Ressa’s libel trial opened on Tuesday in a case that she and press freedom advocates see as government retaliation for her news site’s critical reporting on President Rodrigo Duterte.

The news portal has written extensively and often critically on Duterte’s policies, including his deadly drugs war that rights groups say may be a crime against humanity.

Besides the libel case, Ressa and Rappler have been hit with 10 other criminal charges over the past year, prompting allegations that authorities are targeting her and her team for their work.

“The government hopes to intimidate us by syphoning both my personal time, our resources,” Ressa, who was not in court, told AFP.

“I won’t be intimidated. We continue to do our jobs. The mission of journalism has never been as important as it is today in the Philippines,” she added.

Tuesday’s brief hearing ended after testimony from one minor witness, with the case set to resume on July 30.

The case centres on a Rappler report from 2012 about a businessman’s alleged ties to a then-judge of the nation’s top court.

The legal foundation of the case is a controversial “cybercrime law” aimed at online offences ranging from hacking and internet fraud to child pornography.

Not exempted from assassination

Ressa, 55, argues the law did not take effect until months after the story was published.

Government lawyers say it is effectively a new article since Rappler had updated it in 2014 to fix a typographical error.

Because the law allows the filing of charges up to 12 years after libel is committed, Ressa said it will have far-ranging implications on constitutionally protected freedom of expression as well as the way Filipinos use social media.

Ressa, who has been arrested twice this year, also faces tax and corporate fraud cases, as does Rappler.

Prominent rights lawyer Amal Clooney, who joined Ressa’s legal team this month, said the case echoed a recurring theme in her work, where “journalists who expose abuses face arrest while those who commit the abuses do so with impunity.”

Duterte, who denies being behind the case, has singled out Rappler for criticism, also banning it from covering his public events and forbidding government officials from talking to Rappler reporters.

Shortly before being sworn into office in 2016, then president-elect Duterte declared: “Just because you’re a journalist, you are not exempted from assassination, if you’re a son of a bitch.”

Rights monitor Reporters Without Borders ranked the Philippines at 134 out of 178 countries on its annual “World Press Freedom” index this year, when at least three journalists were killed “most likely by agents working for local politicians.”