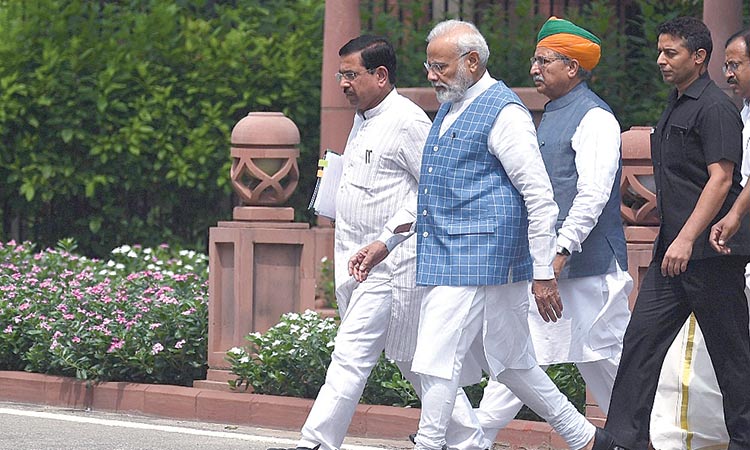 Raising the issue for the second time in the Lower House during Zero Hour, Congress MP Manish Tewari sought Modi’s reply on this issue and asked whether the Prime Minister had made any request to Trump at the G-20 summit. Tewari said if this was the case then, “it is a very big stroke on India’s unity and sovereignty.”

Citing articles published in newspapers, Tewari said the government should clarify on the US President’s claims that Modi in Osaka asked him “why don’t you mediate in Kashmir? Why don’t you become an arbitrator in Kashmir?.”

“We demand that Prime Minister Modi should come to the House and reply if such talk happened between him and Trump. If such talks did not happen between the two leaders, he (Modi) should clearly say that US President is making wrong statement on the Kashmir issue. There should be a clear statement from government and the Prime Minister,” Tewari said.

Roy said, “the Prime Minister has violated the basic thing and compromised the territorial integrity of India and that is why he would not like External Affairs Minister Jaishankar to reply on the matter as he is a professional diplomat and would say high sounding phrases.”

As the opposition’s demand was not heeded and Jaishankar stood up to speak on the issue, the House witnessed an uproar.

Amid the din, the Minister read out a statement rejecting Trump’s claim and said that “no such request was ever made.”

But the opposition, including the Congress, TMC, DMK and NCP, did not pay heed to the government’s statement and trooped out of the House.

Congress on Tuesday dared Modi to wake up and call the latter’s bluff.

“Now, ‘Whitehouse’ puts up POTUS’ (Donald Trump) assertion in ‘black and white’ that Prime Minister Modi asked him to ‘mediate on Kashmir’.

“When will our Prime Minister ‘wake up’ and call the bluff if President Trump is lying? Or did Prime Minister Modi ask POTUS (Donald Trump) to mediate?” Congress spokesperson Randeep Singh Surjewala said in a tweet.

Addressing a press conference on Monday before his meeting with visiting Pakistan Prime Minister Imran Khan in the White House, Trump said: “I was with Prime Minister Modi two weeks ago, and we talked about the subject. And he actually said, ‘would you like to be a mediator, or arbitrator’, and I said ‘where?’, and he said ‘Kashmir’, because this has been going on for many, many years. I was surprised for how long it has been going on,” to which Imran Khan interjected to say, “70 years.”

The central government has, however, rebuffed Trump’s claim, saying that Modi had never made such a request to him, and stressed that all outstanding issues with Pakistan are “discussed only bilaterally.”

“We have seen the US President’s remarks to the press that he is ready to mediate, if requested by India and Pakistan, on the Kashmir issue. No such request has been made by Prime Minister Narendra Modi to the US President,” Ministry of External Affairs Spokesperson Raveesh Kumar said in a tweet.

“It has been India’s consistent position that all outstanding issues with Pakistan are discussed only bilaterally. Any engagement with Pakistan would require an end to cross-border terrorism. The Shimla Agreement & the Lahore Declaration provide the basis to resolve all issues between India and Pakistan bilaterally,” he said.