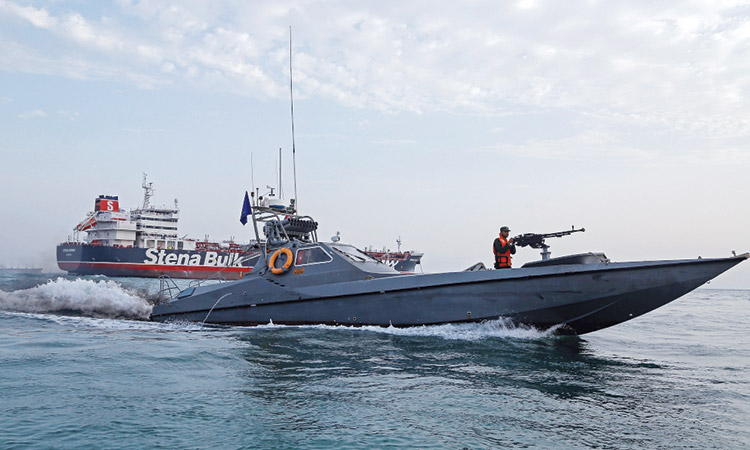 A boat of the Iranian Guard sails next to a British-flagged vessel at Bandar Abbas port on Sunday. Reuters

“Seizing the British tanker was a legal measure by Iran. Iran confronted the ship (to ensure) the region’s security,” Ali Rabiei told a news conference in Tehran.

Iran impounded the Stena Impero tanker on Friday on allegations it failed to respond to distress calls and turned off its transponder after hitting a fishing boat.

It has faced mounting calls to release the vessel and its crew − 18 Indians, three Russians, a Latvian and a Filipino.

“To all the countries that are calling on Iran to release the tanker, we ask them to tell Britain the same thing,” Rabiei said, referring to the seizure by the British authorities of an Iranian tanker in the Mediterranean on July 4.

“Comparing the two seizures is an unfair reading” of the situation, said the Iranian government spokesman.

“When you illegally seize the ship in Gibraltar, we too are not bound to tolerate any more,” he said, while adding the seizure that Tehran carried out was not done in retaliation.

Iran said on Sunday that the fate of the Stena Impero depends on an investigation into its alleged breach of international maritime rules.

As well as failing to respond to distress calls and turning off its GPS tracker, it also says the tanker sailed in the wrong direction in the narrow waterway.

In a letter to the UN Security Council, London accused Tehran of “illegal interference.”

It said there was no evidence of a collision and the vessel had been in Omani waters with its transponder switched on when it was approached.

British Prime Minister Theresa May chaired an emergency meeting of ministers and security officials on Monday to discuss how to respond after Iran seized a UK-flagged tanker in the Gulf.

The move came two weeks after British authorities seized an Iranian tanker off Gibraltar on suspicion of breaching sanctions against Syria, and against a backdrop of brinkmanship between Washington and Tehran.

“The ship was seized under false and illegal pretences and the Iranians should release it and its crew immediately,” May’s spokesman told reporters.

“We do not seek confrontation with Iran but it is unacceptable and highly escalatory to seize a ship going about legitimate business through internationally recognised shipping lanes.”

Following criticism over security protection for British-linked ships in the region, the spokesman said the high volume of ships moving through the Strait of Hormuz “makes it impossible to escort vessels individually.”

The EU has condemned Iran’s action and Hunt spoke to his French and German counterparts on Sunday.

They agreed that “safe passage for vessels through the Strait of Hormuz is a top priority for European nations, while avoiding any possible escalation in the region,” a British statement said.

Tensions in the Gulf have ramped up since May, when the US boosted its military presence in response to what it called indications of a “credible threat” from Iran.

The British government had warned its ships to avoid the Strait of Hormuz, a chokepoint for about a third of the world’s sea-borne oil.

But questions are being asked in London about why it was not more proactive in protecting ships after the Gibraltar incident, which provoked fury in Tehran.

The standoff comes at a sensitive time for Britain, with May due to resign on Wednesday over her Brexit strategy, with former foreign minister Boris Johnson the overwhelming favourite to replace her.

Junior defence minister Tobias Ellwood said on Sunday that Britain would be looking “at a series of options” on how to respond to Iran’s actions.

Iranian authorities said they detained Stena Impero after the tanker failed to respond to distress calls and turned off its transponder after hitting a fishing boat.

But in a letter to the UN Security Council, British charge d’affaires Jonathan Allen accused Tehran of “illegal interference.”

He said there was no evidence of a collision and said the vessel had been in Omani waters with its transponder switched on when it was approached. 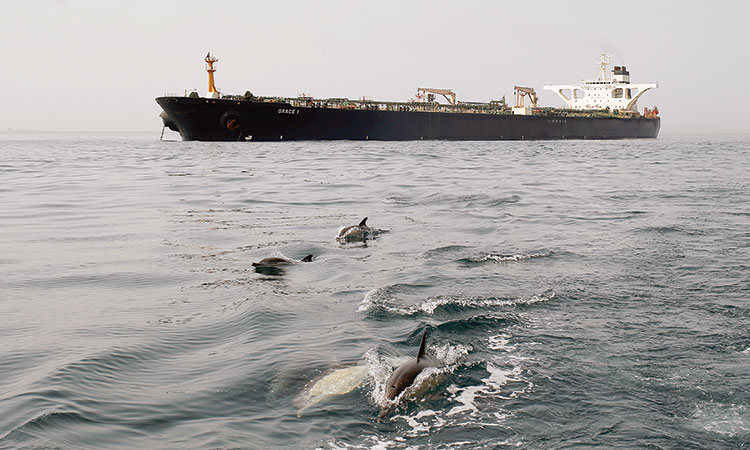