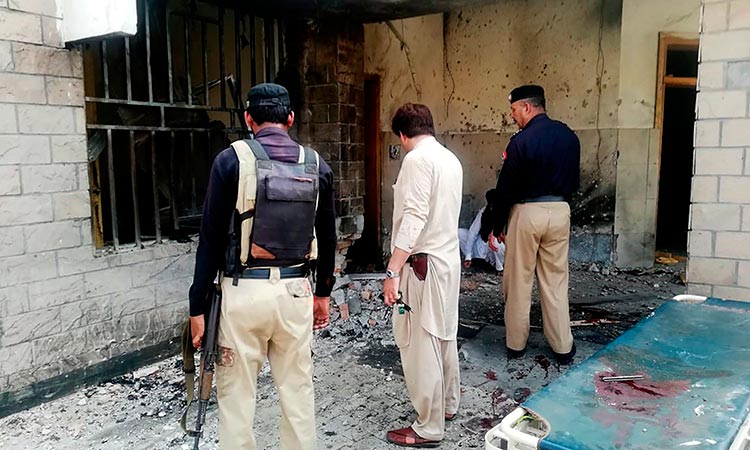 Pakistani security officials examine the site at the entrance of a hospital in Kotlan Saidan village in Dera Ismail Khan. Adil Mughal/AFP

A female suicide bomber in northwestern Pakistan killed at least eight people and wounded 26 more in an attack outside a local civilian hospital on Sunday, local officials said.

The attack in Dera Ismail Khan early on Sunday was claimed by Tehrik-e-Taliban Pakistan, often known as the Pakistani Taliban, which is separate from the insurgent movement across the border in Afghanistan.

"When their bodies were taken to the main hospital, a suicide bomber, believed to be a female, wearing a burqa, triggered an explosive-laden jacket and caused huge losses.

"When their bodies were taken to the main hospital, a suicide bomber, believed to be a female, wearing a burqa, triggered an explosive-laden jacket and caused huge losses," said Waqar Ahmad, a local police officer.

He said the blast had damaged the emergency ward of the hospital and forced some of the wounded to be transferred to other cities. Muhammed Khurasani, a spokesman for the TTP, claimed responsibility for the attack, which he said was carried out in revenge for the killing of two Taliban commanders by counter terrorism police around a month ago. However he denied the bomber was female.

Dera Ismail Khan has seen a number of suicide attacks over the past decade as the Pakistani military carried out a campaign to suppress militant attacks in the area, an important hub in the $60 billion China Pakistan Economic Corridor.