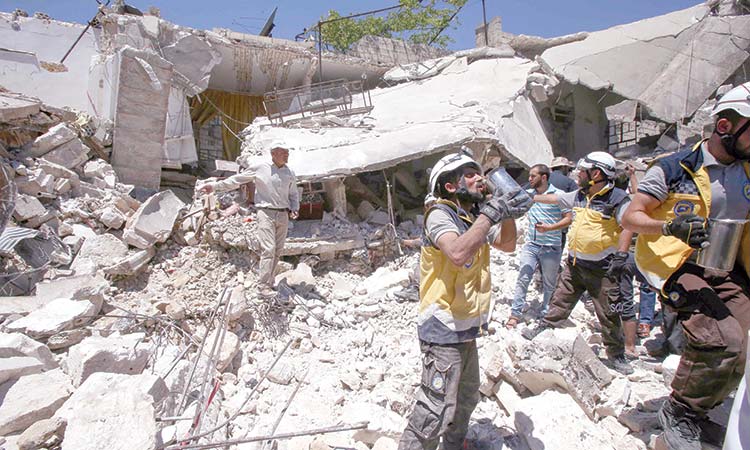 White Helmets search for victims after a building collapsed during air strikes in Urm Al Jaws on Sunday. Agence France-Presse

A young citizen journalist was among 11 civilians killed in air raids on Syria’s Idlib region on Sunday, rescue workers and a monitor said, as he filmed the Russia-backed regime bombardment of the battered enclave.

Anas Al Dyab, a photographer and videographer in his early 20s, was a member of the White Helmets who also contributed to AFP.

He was killed in Russian air strikes in the town of Khan Sheikhun, rescuers and the Syrian Observatory for Human Rights said.

The White Helmets, rescue workers in rebel areas named after their distinctive hard hats, said the group “mourns the fall of a hero Anas Al Dyab, a volunteer and media activist with the Syrian Civil Defence Centre in Idlib,” in a Twitter post.

An AFP journalist saw White Helmet members gather to bid farewell to their friend, whose body was laid on a thick red blanket.

The Damascus regime and its Russian ally have stepped up their deadly bombardment of the militant-run region of Idlib since late April, despite a September buffer zone deal to protect the region of some three million people from a massive military assault.

Khan Sheikhun, a town in the south of Idlib, has been particularly hit, forcing thousands to flee their homes there, according to the United Nations.

But Dyab “chose to remain with his fellow volunteers in Khan Sheikhun till today,” the White Helmets said.

Raed Al Saleh, the head of the White Helmets, said Dyab was killed while “trying to show the world what’s going on in Syria.”

Dyab, who was single, leaves behind his parents and three brothers, one of whom is held by the Damascus regime, Saleh said.

The Observatory said Dyab was hiding in the cellar of a three-storey building with two members of the Jaish Al Ezza rebel group when the strike happened.

Also on Sunday, regime air strikes killed 10 other civilians including three children in other parts of the bastion, said the Britain-based monitor, which relies on sources inside Syria for its information.

Syria’s former Al Qaeda affiliate Hayat Tahrir Al Sham in January took full administrative control of the Idlib region, although other militants and rebels are also present. The Idlib region is supposed to be protected by a September 2018 deal between Russia and rebel backer Turkey, but a buffer zone planned under that accord was never fully implemented.

The White Helmets, who are backed by the West, were nominated for the Nobel Peace Prize in 2016.

But Moscow and Damascus accuse the group of backing rebels and militants.

Russia on Thursday opposed a United Nations Security Council resolution calling for an end to attacks on health facilities in Idlib, diplomats said after the latest meeting over violence in the country’s last major opposition bastion.

The outcome led to a rare statement following the meeting by the UN’s humanitarian chief, Mark Lowcock.

“The carnage must stop,” he said.

Kuwait, Germany and Belgium asked for the hastily called closed-door session, the latest of many they have sought since May in response to worsening fighting in Syria’s northwest.

The draft text, given to journalists, expressed “grave concern regarding the recent attacks on hospitals and other health facilities,” including a July 10 attack on Maarat National Hospital, one of the largest in the area and whose coordinates had been shared through the UN “deconfliction mechanism” that aims to spare civilian targets.

“I provided information from my ministry of defense” and investigation demonstrated that there were “no attacks at nine out of eleven facilities” allegedly attacked, Moscow’s UN Ambassador Vassily Nebenzia told reporters.

“The two others were partially damaged but not by Russian” forces, he said.

“There’s some interest in an investigation into the Maarat Hospital hit. So I think that’s the thing to focus on,” she said at the end of the meeting.

“We’ve got our suspicions. But let’s get a proper look into that and get a proper answer.” Lowcock said after the meeting that since July 1, “at least six health facilities, five schools, three water stations, two bakeries and one ambulance have been damaged or destroyed.