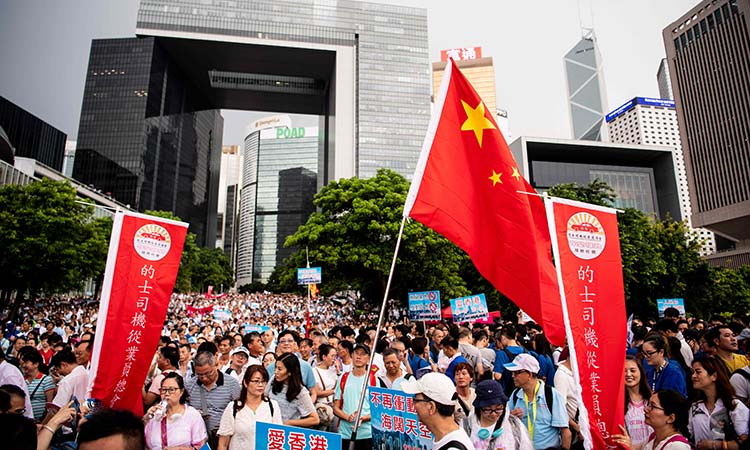 A Chinese flag is held at a rally in support of the police in Tamar Park in Hong Kong on Saturday. Laurel Chor/AFP

• The bill has since been suspended, but that has done little to quell public anger
• Hong Kong's police are in the midst of a major reputational crisis
• Some of the most violent clashes occurred last Sunday

Tens of thousands of people rallied in support of Hong Kong's police and pro-Beijing leadership on Saturday, a vivid illustration of the polarisation coursing through the city after weeks of anti-government demonstrations.

Hong Kong has been rocked by more than a month of huge and largely peaceful protests — as well as a series of separate violent confrontations with police — sparked by a proposed law that would have allowed extraditions to mainland China and other countries. 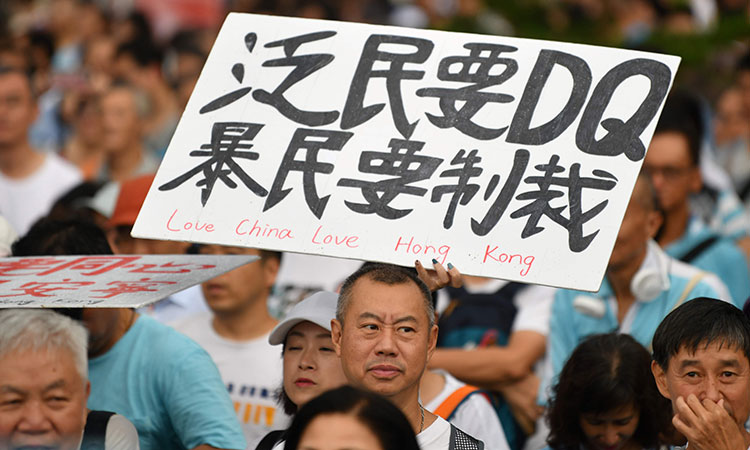 The bill has since been suspended, but that has done little to quell public anger which has evolved into a wider movement calling for democratic reforms, universal suffrage and a halt to sliding freedoms in the semi-autonomous financial hub.

Saturday's rally was a moment for the establishment to muster their own supporters.

A predominantly older crowd was joined by families and younger residents, waving Chinese flags and holding banners supporting the police.

"Friends who used violence say they love Hong Kong too, but we absolutely cannot approve of their way of expressing themselves," said Sunny Wong, 42, who works in insurance.

A 60-year-old woman surnamed Leung said protesters who stormed and vandalised the legislature earlier this month must be held responsible for their acts.

"I really dislike people using violence on others... it was so extreme," Leung said.

"Friends who used violence say they love Hong Kong too, but we absolutely cannot approve of their way of expressing themselves.

Police estimated a turnout of 103,000 people at the peak of the rally, while local media cited organisers as saying 316,000 attended.

Hong Kong's police are in the midst of a major reputational crisis.

With no political solution on the table from the city's pro-Beijing leaders, the police have become enmeshed in a seemingly intractable cycle of clashes with protesters who have continued to hit the streets in huge numbers for six weeks. 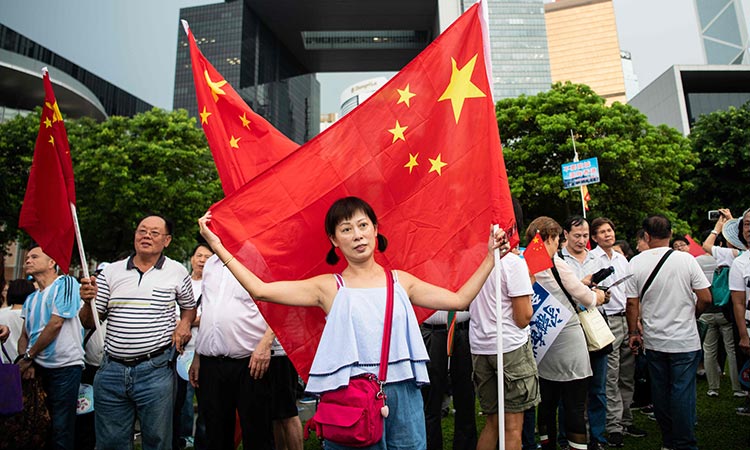 Chinese flags are waved at a rally in support of the police in Tamar Park in Hong Kong on Saturday. Laurel Chor/AFP

Demonstrators and rights groups have accused riot police of using excessive force, including tear gas and rubber bullets, and public anger against the force is boiling over.

Police insist their crowd control responses have been proportionate and point to injured officers as proof that a hardcore minority of protesters mean them harm.

Some of the most violent clashes occurred last Sunday when riot police battled protesters hurling projectiles inside a luxury mall. Some 28 people were injured, including 10 officers. 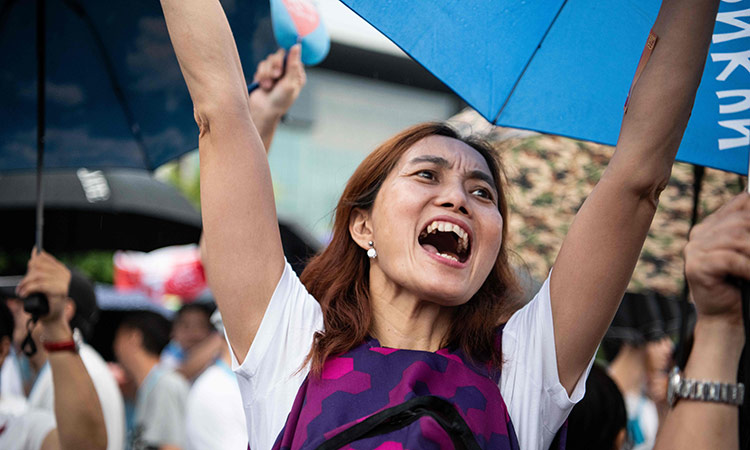 A woman cheers at a pro-police rally in Tamar Park outside the government headquarters. Laurel Chor/AFP

There is growing frustration among the police force's exhausted rank and file that neither the city's leaders, nor Beijing, seem to have any idea how to end the crisis.

It featured a drawing of a large foot kicking over a pro-democracy demonstrator.

Many of those at the rally held aloft large slogans printed on the spread of Wen Wei Po, another stridently pro-Beijing newspaper in the city.