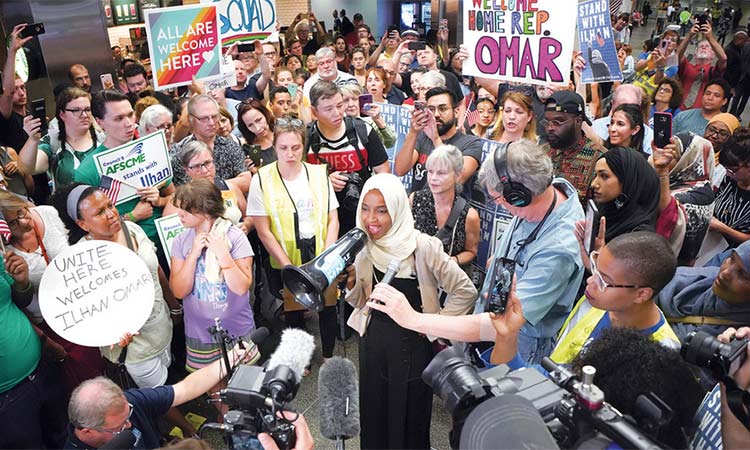 Ilhan Omar speaks to supporters after arriving in Minnesota on Thursday. Associated Press

President Donald Trump on Friday slammed what he called “crazed” media coverage of taunts targeting a Somali-born Democratic lawmaker during one of his rallies, alleging political bias against him.

Facing a mounting backlash over the cries of “Send her back” aimed at congresswoman Ilhan Omar, Trump accused the media of a “sick partnership” with his Democratic opponents.

“It is amazing how the Fake News Media became ‘crazed’ over the chant ‘send her back’ by a packed Arena.... but is totally calm & accepting of the most vile and disgusting statements made by the three Radical Left Congresswomen,” Trump tweeted.

“Mainstream Media, which has lost all credibility, has either officially or unofficially become a part of the Radical Left Democrat Party,” he continued.

“It is a sick partnership, so pathetic to watch!”

Trump ignited a firestorm at the weekend when he urged Omar and three other progressive Democratic congresswomen of colour — all American citizens and three of them US-born — to “go back” to their countries of origin.

Despite the uproar over his comments, condemned as “racist” by the Democratic-controlled US House of Representatives, Trump stepped up his attacks at a rally in North Carolina on Wednesday, where the incendiary chants broke out.

Trump later sought to disavow the chants, but television footage showed he let them continue for more than 10 seconds before he resumed speaking.

“I firmly distance myself from (the attacks) and I feel solidarity towards” the women, she told journalists.

“In my view, the strength of America lies in that people from different (origins) contributed to what makes the country great.”

International condemnation has rained down over the comments, with British Prime Minister Theresa May calling them “completely unacceptable” and New Zealand’s leader Jacinda Ardern saying she “completely and utterly” disagrees with him.

While usually refraining from commenting on other countries’ domestic politics, Merkel also had markedly sharp words about Trump’s latest attacks.

Questions over racism are particularly sensitive in Germany given its Nazi past, and the government routinely speaks out forcefully in favour of tolerance and diversity.

While Merkel had shared a visibly warm relationship with former US president Barack Obama, her contact with Trump has been formal and firm.

Setting the tone from the start, Merkel in her first phone call with Trump after he took office offered co-operation, but also reminded him of democratic values.

That phone call led some commentators to suggest she had taken on the mantle of the “leader of the free world,” a title usually reserved for US presidents.

Chants of “send her back” directed at politicians are completely unacceptable in a modern democracy, British Interior Minister Sajid Javid said on Friday.

Boris Johnson and Jeremy Hunt, the contenders to be the next British prime minister, have criticised Trump’s Twitter attack but have not called it racist.

“I am deeply concerned ... the chants of ‘send her back,’ this is going on in the US today. Imagine if people were saying to me in Britain ‘send him back,’” said Javid, who is of Pakistani heritage.

“I’d like to think that most of society would think that’s just completely unacceptable in a modern liberal democracy.”

Javid declined to call Trump racist when asked in a follow-up question after a speech on tackling extremism.

Ilhan Omar branded Donald Trump a “fascist” on Thursday as the president sought to distance himself from mocking chants of “Send her back!” directed at the Somali-born lawmaker by his supporters.

“We have said this president is racist, we have condemned his racist remarks,” said Omar, one of two Muslim women in Congress. “I believe he is fascist.” 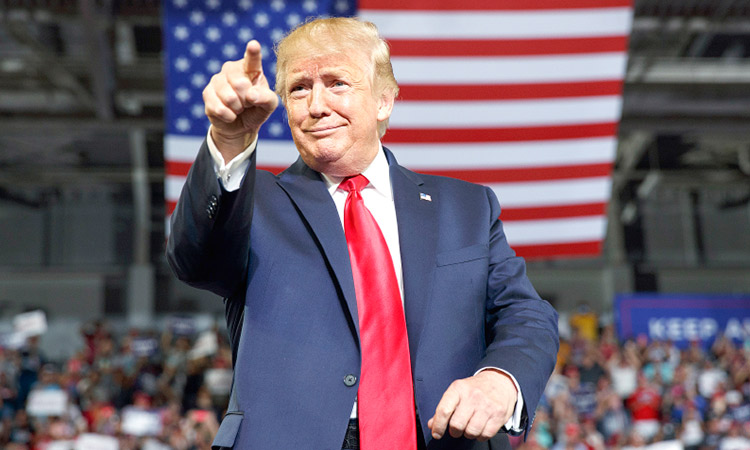 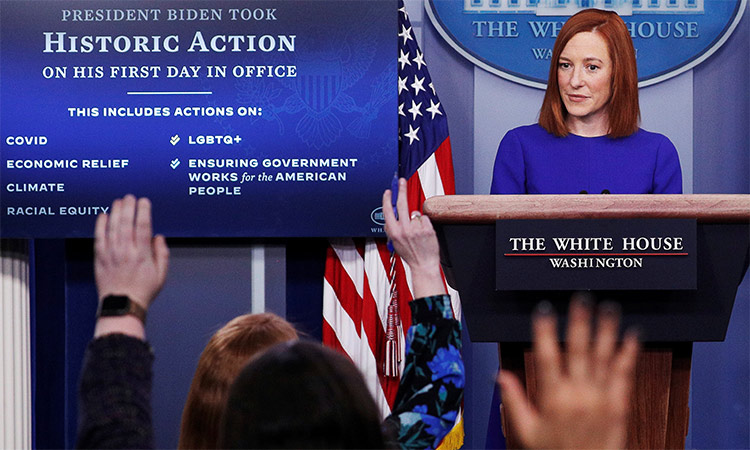 Biden’s briefing room is more Trump-like than others

On Monday, White House Press Secretary Jen Psaki and National Security Adviser Jake Sullivan walked into the James S Brady Briefing Room to face 49 journalists across the room’s seven rows of seats, and another 30-some standing among the aisles. Over the course of the morning, more