Tensions flare up in Gulf as US downs Iranian drone - GulfToday 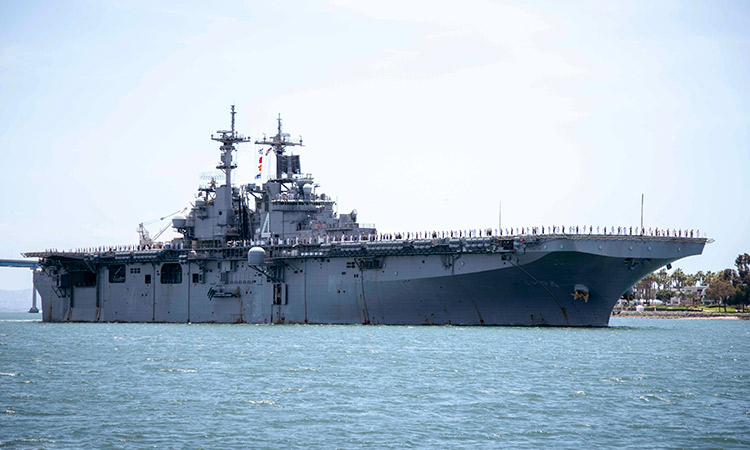 US President Donald Trump said late on Thursday that an Iranian drone was destroyed after threatening an American naval vessel at the entrance of the Strait of Hormuz.

It was the first US military engagement with Iran following a series of increasingly serious incidents.

Trump announced that the USS Boxer, an amphibious assault ship, "took defensive action" against the Iranian drone as it was "threatening the safety of the ship and the ship's crew."

The drone was "immediately destroyed" after it approached within 914 metres of the Boxer, Trump said.

"This is the latest of many provocative and hostile actions by Iran, against vessels operating in international waters," he added.

"The United States reserves the right to defend our personnel, our facilities and interests and calls upon all nations to condemn Iran's attempts to disrupt freedom of navigation and global commerce."

Tehran's top diplomat, Mohammad Javad Zarif, told reporters he had "no information about losing a drone today," as he arrived at the United Nations headquarters for a meeting with Secretary-General Antonio Guterres.

Iran's deputy foreign minister Abbas Araghchi denied on Friday having lost any drone recently and hinted that the US could have downed their own "by mistake."

"We have not lost any drone in the Strait of Hormuz nor anywhere else. I am worried that USS Boxer has shot down their own UAS by mistake!" Araghchi tweeted,

The apparent confrontation came as Iran defended its detention on Sunday of a "foreign tanker" believed to be the Panamanian-flagged vessel Riah and its 12 crew for allegedly smuggling fuel.

"The vessel was en route to deliver contraband fuel received from Iranian boats to foreign ships in farther regions when it was intercepted," Revolutionary Guards' Sepahnews website said.

The incident comes after a series of low-level attacks in the region blamed on Tehran's forces, including placing limpet mines on several tankers and actions by what Washington calls Iranian proxies in Syria and Yemen.

Emirates spokesman said in a statement, "We are carefully monitoring the ongoing developments and are in close contact with the relevant government authorities with regards to our flight operations, and will make further operational changes if the need arises."