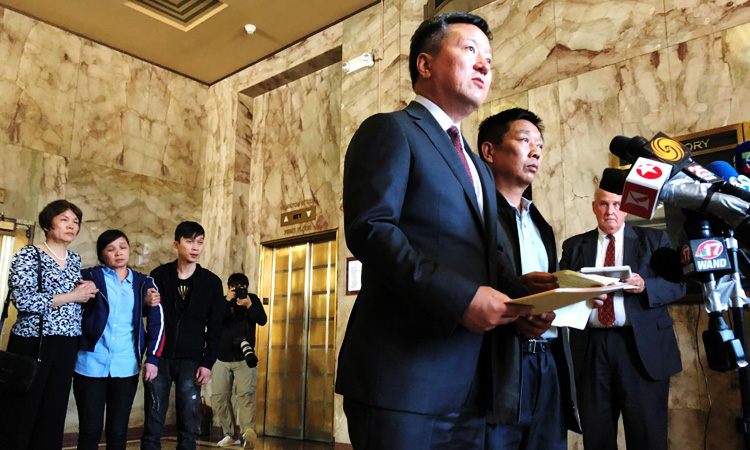 Zhidong Wang attorney and spokesman for the Zhang family speaks to reporters with Ronggao Zhang in Peoria, Illinois, US on Thursday. Robert Chiarit/ Reuters

An Illinois man described by prosecutors as obsessed with serial killers was sentenced to life in prison on Thursday for the kidnapping and decapitation of a Chinese graduate student two years ago.

A US District Court jury in Peoria, Illinois found Brendt Christensen, 29, guilty last month of all charges in the murder of Yingying Zhang, a 26-year-old student at the University of Illinois at Urbana-Champaign.

On Thursday, the same jury of five women and seven men told the judge they were unable to unanimously decide between life in prison or the death penalty. Christensen was then sentenced to life imprisonment by default.

Christensen, who looked down with his eyes closed, smiled and sighed when US District Judge James Shadid read the decision. He hugged and thanked his lawyers. His mother was hugged by a member of his legal team in the courtroom.

Shadid admonished Christensen for not addressing Zhang’s family when he gave him the opportunity during a brief hearing later when he formally sentenced him.

“The mercy extended to you by this jury is a testament to their humanity, not your character,” Shadid said.

While Illinois has outlawed capital punishment, it is an option in federal cases tried under US kidnapping laws.

In the sentencing phase of the trial on Wednesday, prosecutors described how Christensen, a one-time masters student at the university, took Zhang to his apartment, where she fought for her life as he bludgeoned her with a baseball bat, raped her and stabbed her in the neck before cutting off her head.

“He will die in prison as he should for these unthinkable acts,” John Milhiser, the US attorney for the central district of Illinois, told a news conference.

Christensen’s lawyers acknowledged in the trial and closing arguments that their client killed Zhang, but asked the jury to consider that he had struggled with substance abuse and mental illness.

“It’s the lesser of two evils,” Christensen’s father Michael said of the sentence.

Zhang’s parents and fiancé sat through the five-week trial in Peoria, about 165 miles (266 km) southwest of Chicago. In a statement her family said it disagreed with the sentence.

“We accept that he will spend the rest of his life in prison, which still reflects our loss in a meaningful way,” the family said.

Zhang was reported missing on June 9, 2017, two months after arriving from southeastern China to study photosynthesis and crop production. Her remains have never been found but prosecutors said her DNA matched blood found in three spots in Christensen’s bedroom.

“If you have any humanity left in your soul, please help us end our torment,” the Zhang family said, pleading for Christensen to disclose where he left her body.

The case has been closely watched in China, where state-run media have covered the court proceedings, and the sentencing set social media alight on Friday.

Three of the top 10 topics trending on Twitter-like Weibo related to the case, with many comments disparaging the US legal system and expressing outrage over the jury’s inability to agree to a death sentence.

“So, this is the reason why there are so many serial killers in America, because crime is encouraged by the law at its roots,” ran one comment.

“This is saddest for her parents...no death sentence,” read another. “The US legal system is really crap.”

Investigators were led to Christensen through surveillance video footage in Urbana, 130 miles (210 km) south of Chicago, that showed Zhang getting into a black car later traced to him.

Prosecutors at the trial characterized Christensen as having a fascination with serial killers, including Ted Bundy, executed in 1989 after having murdered dozens of women during the 1970s.

Details of the crime, including Zhang’s decapitation, were revealed by Christensen in conversations with a girlfriend secretly recorded for FBI agents investigating the case before his arrest, according to trial testimony.