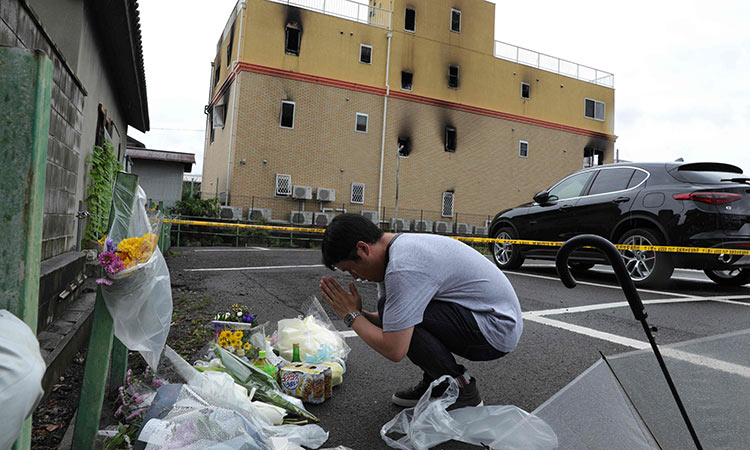 A man prays next to flowers and tributes laid at the scene where over 30 people died in a fire at an animation company building in Kyoto on Friday. Buddhika Weerasinghe / AFP

Details emerged on Friday of a horrifying inferno that tore through a Japanese animation firm and killed dozens, with people jumping out of the three-storey building and others trapped in a staircase unable to escape.

Eyewitnesses described a fire that was like "looking at hell," after a man apparently doused the production company office in the city of Kyoto with flammable liquid and set it alight.

Experts and firefighters said the blaze would have raged uncontrollably throughout the structure almost instantly, leaving the dozens of people inside with almost no chance of escape.

That was borne out by the grim toll: 33 dead, with dozens more injured, including several in critical condition.

The attack appeared to be among the worst violent crimes in decades in Japan, which has a famously low crime rate.

It sparked an outpouring of grief in Japan and beyond, as fans of the country's famed anime industry expressed horror at the enormous loss.

On Friday morning, people were arriving at the charred Kyoto Animation building to lay flowers and pay respects.

"These young people were the age of my grandchildren," 78-year-old Sachiko Konishi told reporters of those killed in the attack, most of whom are presumed to be young employees of the company.

"If my grandchildren died under circumstances like this, I wouldn't want to go on living." Yasuko Tomita, 59, was offering prayers near the building, which was still cordoned off.

"I'm praying to help the souls of those killed find release," she said.

Eyewitnesses described a raging inferno that left those outside unable to even approach to help people trying to escape.

"There was a person who jumped from the second floor. The person jumped, desperately trying to get away from the building but we couldn't rush to help because the fire was so strong," one local woman told an online affiliate of the Asahi Shimbun daily.

"It was like I was looking at hell." Police investigators were on the scene Friday taking pictures and examining the devastated building.

No motive has yet emerged in the apparent attack. Police have detained a 41-year-old suspect, but their investigation has been hampered by the fact that he suffered serious burns in the blaze. He has been hospitalised and was reportedly unconscious on Friday.

Only sketchy details have emerged about the man, who reportedly shouted "drop dead" before setting the fire.

Local media said he did not appear to have any ties to Kyoto Animation. He had reportedly also brought knives and a hammer to the building. 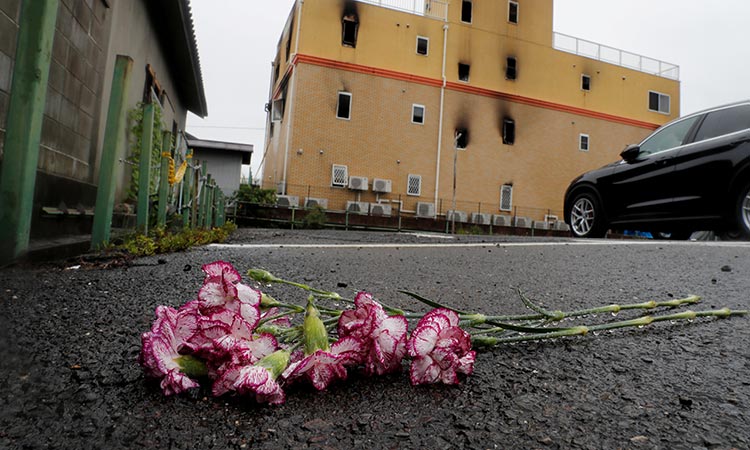 Flowers are placed in front of the torched Kyoto Animation building to mourn the victims of the arson attack in Kyoto on Friday. Kim Kyung-Hoon / Reuters

Some reports suggested the man believed the company had stolen his work, with the local Kyoto Shimbun newspaper reporting that he told police: "I set the fire because they stole novels."

On Thursday, Kyoto Animation president Hideaki Hatta said the firm had received emailed death threats in the past but gave no further details.

There was still little information on the victims of the blaze.

Local police said 12 men and 20 women were among the dead, with one victim not yet identified.

Many of the bodies were found on a stairwell leading to the roof, suggesting people were trying to escape the flames when they were overcome.

A local fire department official told reporters that the building was in compliance with fire safety rules.

But he said a gasoline-fuelled fire would have burned too quickly for people to outrun it, with a spiral staircase connecting the floors of the building likely helping the blaze spread faster.

"If a large quantity of gasoline was poured, it must have turned into gas very quickly, causing explosions," he told AFP.

"Smoke and flames would have risen up instantaneously." Keizo Harafuji, a former scientific investigation officer for the Tokyo police, also said those inside would have had little chance of escape.

"Flames spread incomparably faster with gasoline than in a normal fire," he told public broadcaster NHK.

"The temperature in a room can rise to 1,500 degrees in some cases. Iron can melt in this heat and people cannot breathe." The blaze hit hard in Japan's anime industry, one of the country's best known cultural products.

An online fundraiser organised by an American anime licencing firm had raised over one million dollars by Friday morning.

"Thank you to everyone who has shown their support for those impacted by the tragedy at KyoAni," the organisers Sentai Filmworks wrote, using a nickname for Kyoto Animation.

"Together, we can bring light to this incredibly dark time." 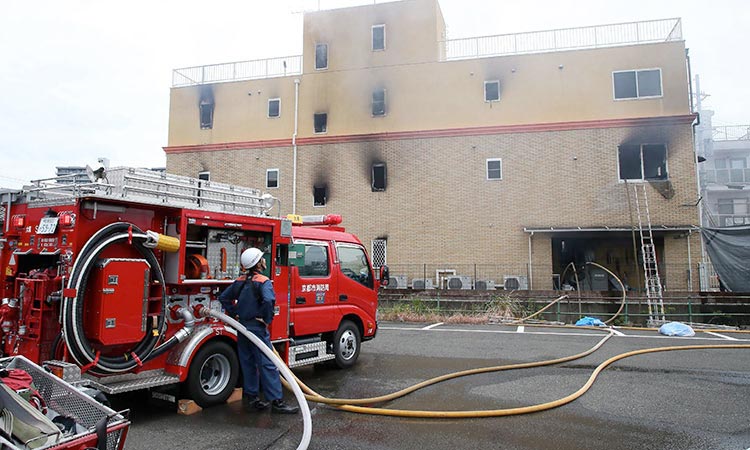