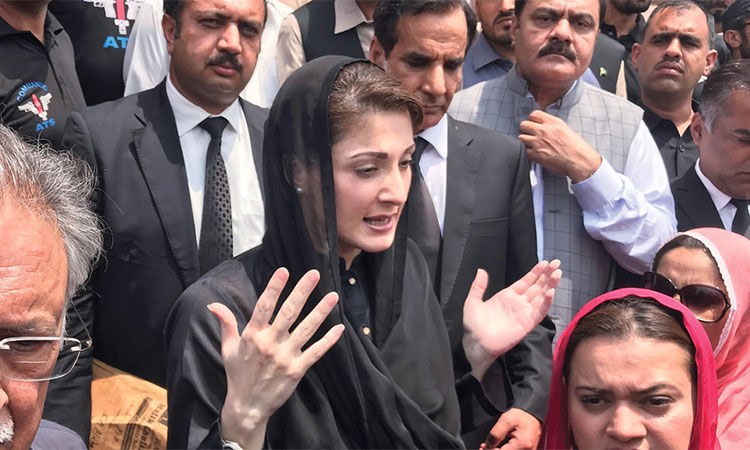 Maryam Nawaz speaks to reporters outside an accountability court in Islamabad on Friday. Associated Press

Tariq Butt
An accountability court of Islamabad on Friday dismissed a plea of the National Accountability Bureau (NAB) seeking action against Pakistan Muslim League-Nawaz (PML-N) Vice President Maryam Nawaz for allegedly submitting a bogus trust deed in the London apartments’ reference in which former prime minister Nawaz Sharif and she were convicted.

The court, presided by Judge Muhammad Bashir, declared the plea inadmissible for hearing.

Although she was willing to give the government five-year time, people will not let it complete its term since it has failed completely, she said.

The PML-N vice president said as many as 150 party workers were arrested from Rawalpindi on Friday.

She said Prime Minister Imran Khan’s government is trying to suppress the voices of PML-N leaders but they “will continue to raise their voice against injustice.”

She questioned why no action has been taken against judge Arshad Malik after she exposed him during her press conference with video proof on July 6. “We need to sacrifice our own principles because of a selected prime minister.”

Maryam said Imran locked Islamabad for 126 days during his sit-in, but now he was unable to tolerate any protest. “If he couldn’t, why did he prefer to be ‘selected’? “Those who had paralysed the capital for 126 days should be ashamed of such acts.”

Maryam, who appeared before the court, was accompanied by her husband Captain (retd) Mohammad Safdar, Marriyum Aurangzeb, Pervez Rashid and Sadia Abbasi. Dozens of PML-N workers were also present at the premises to support their party leader.

The NAB had alleged that the trust deed Maryam presented in the case was bogus and requested a trial against her for fraudulent documents.

Her lawyer Amjad Pervez prayed the court to reject the NAB’s plea since the anti-graft body had no right to file such an application. He said the court could not hear the plea after a judgement has been challenged in the Islamabad High Court (IHC).

NAB prosecutor Sardar Muzaffar Abbasi argued that although Maryam was awarded sentence in London apartments’ reference, she must face trial for submitting the bogus trust deed.

In 2017, the Supreme Court formed a Joint Investigation Team to carry out investigations against Sharif and his other family members after the Panama Papers were released. The documents showed the offshore companies of the Sharifs.

The JIT report surmised that some of the documents it received from Maryam were forged, as they used Microsoft’s “Calibri” font.

He will be presented before the court on Aug.1. During his appearance, Judge Muhammad Bashir inquired from Abbasi as to who was his lawyer. “I have not engaged any lawyer as I will myself plead my case. Please give the NAB my 90-day physical remand so that the NAB could understand what the LNG deal is.”

The NAB arrested Abbasi on Thursday in the case pertaining to the award of liquefied natural gas (LNG) import contract.

Abbasi, who is member of the National Assembly, had his vehicle intercepted by a NAB team at the Thokar Niaz Baig motorway interchange near Lahore, while he, along with fellow PML-N leader Ahsan Iqbal and party spokesperson Marriyum Aurangzeb, was on his way to attend a press conference.

Also on Friday, the Sindh High Court (SHC) granted former finance minister Miftah Ismail seven-day protective bail, a day after NAB surrounded his house and searched it for hours to arrest him.

Ismail told reporters there was no need for the NAB to conduct raids, adding that he had received notices for appearance late. He said whenever the NAB had summoned him, he had appeared before it. 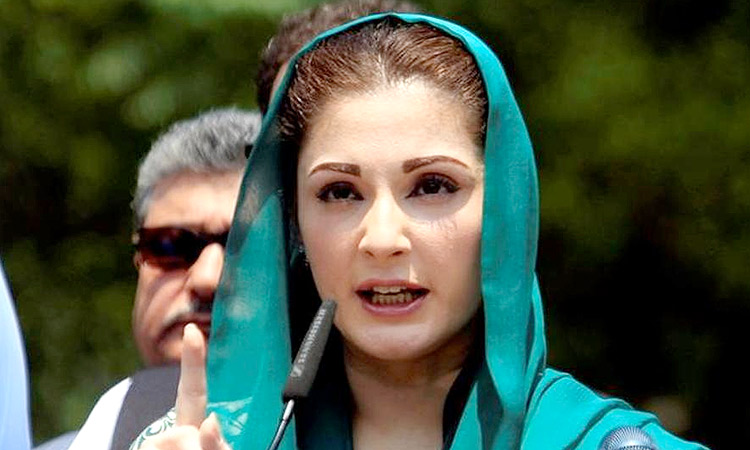